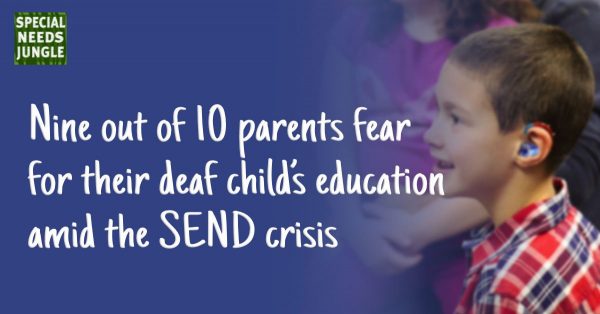 Let’s walk in a parallel world for a bit. A world where there’s never been a better time to be a deaf child than right now. In this world, deafness can be diagnosed within a few days of birth giving deaf babies and their families the earliest possible chance to get support.

In this world, public awareness, respect and understanding of British Sign Language (BSL) has improved, thanks to Oscar-winning short films and inspirational deaf role models. For those who choose it, hearing technology has never been better, due to high-quality digital hearing aids and cochlear implants.

And in this world, our understanding of how deaf children learn is at an all-time high, because of ground-breaking academic research that gets fed into professional training programmes things that have changed for the better over the last 15 years.

So with all this going on, the life chances, educational attainment and all-round wellbeing of deaf children and young people should be soaring. But they’re not. Things aren’t getting better. The gap between deaf and hearing children hasn’t closed; it’s getting worse.

So how on Earth is this happening? It’s fairly simple: Despite so much else going right, a key part of the support system deaf children rely on is utterly broken - the SEND system. And, as this system continues to tailspin, it’s dragging deaf kids’ futures down with it.

Last week, the National Deaf Children’s Society asked parents of deaf children about education support – what their kids were getting now, and what they expected support to look like in the future. Over 1,000 parents replied – including me – and the findings were grim.

The years since the 2014 SEND reforms have not been kind to deaf children. Most are educated in mainstream schools. Four out of every five do not have an EHCP. And the specialist support that many deaf kids in mainstream depend on has been whittled away by pressures on school budgets and hollowed-out local authority specialist support services. There are now only a handful of special schools for the deaf, scattered across the country.

As a result, caseloads for peripatetic teachers of the deaf have become unmanageably large. Incredibly, one in every seven of teachers of the deaf are now trying to support over 100 children. It’s simply not possible to provide even a fraction of the help the kids and their mainstream teachers need. Worse still, there’s a demographic time-bomb looming. Over half of England’s teachers of the deaf are due to retire within the next 10-15 years, and there aren’t enough new trainees coming through to replace them.

Deafness isn’t a learning disability, but one of the biggest single problems that deaf children face is language deprivation. Even with screamingly obvious need, it is now extraordinarily difficult for most deaf children to secure speech and language therapy – and it is just as hard to secure high-quality BSL communication support in the classroom.

Even worse for social care

Turn to social care, and things are even worse. Support for deaf children has withered to nearly nothing. If you saw the Oscar-winning short film “The Silent Child", you might remember Rachel Shenton’s character, Joanne, a social worker specially trained to support deaf children, who introduced Libby to BSL for the first time. Social workers like this are rarer than hen’s teeth now; earlier this year, an annual survey of professionals indicated that in 2017, only five of 130 responding local authorities still employ specialist social workers for deaf children, with fewer than nine full-time equivalent posts across all of them.

From Specialists To Gatekeepers

Most of the specialist support that deaf children depend on comes from staff employed by local authorities and the NHS. These staff are coming under increasing pressure to act primarily as resource gatekeepers rather than specialist professionals who meet the needs of children.

And that means unlawful policies and practices abound. I have lost count of the number of parents who have been told by professionals that their deaf child won’t get an EHCP, or language therapy, or a communication support worker, or even a simple radio aid that allows them to hear their teachers properly - because of arbitrary thresholds that bear no relation to the child’s actual needs.

These thresholds would be pulverised by most SEND Tribunal panels – and when put to the test, that’s exactly what happens. Since the 2014 SEND reforms, SENDIST panels have upheld the LA’s decision-making in just 6% of appeals involving deaf children. As with so many other areas of SEND, the Tribunal isn’t just the last line of practical accountability for deaf children – it’s the only line of practical accountability. Deafness is a low-incidence disability – and whilst local area SEND services are now inspected by Ofsted & CQC, barely half of the inspection outcome letters to date have made any reference to deaf children’s services; when they do, it’s usually not more than a brief sentence.

Education support for deaf children has been squeezed for years – and with both schools and LAs now in desperate financial straits, the squeeze is tighter now than ever before. This year, over a third of LAs told the National Deaf Children’s Society that they planned to cut specialist support services for deaf children. On average, services in these LAs are likely to be cut by around 10%, and the overall butcher’s bill for deaf service cuts is likely to be in the region of £4m.

Times have never been tougher for local authorities – but context matters. In the same time period that these £4m cuts to deaf services are kicking in, we estimate that LAs will use at least £30m of their resources to defend SENDIST appeals – appeals that they lose nine times out of ten.

So how do these cuts affect families of kids like mine? Let’s meet Isla – she’s 9 years old, she’s profoundly deaf, she lives in the North East, she’s 9 years old, and according to her mother Sarah, Isla is “brave, clever, feisty, wickedly observant, fiercely determined and wildly competitive.”

Like 90% of deaf children, Isla is part of a family of hearing parents and siblings. She’s been using cochlear implants for 6 years, she’s in a mainstream primary school, and she’s been making good progress.

That progress is now in peril – because earlier this year, her school and LA stripped away almost all the support Isla depends on. Isla relies on support from a teaching assistant to ensure that she can understand what’s being said in a busy mainstream primary classroom. Isla now gets just three hours of TA support per week, because neither the school nor the LA say they can afford it. Isla isn’t deaf for only three hours a week – she’s got permanent, sensori-neural deafness, and despite the myths, cochlear implants aren’t any sort of magic cure for it.

Isla might not always need this support – but she needs it right now, and it’s been taken away from her. The consequences for Isla are grim. Without this support, her educational progress is slipping, and the support she needs to learn how to keep up with her classmates socially just isn’t there any more.

Cuts like these aren’t just about academic attainment and progress – their impact bleeds into after-school activities too. When the support isn’t right, school is completely exhausting for deaf children – the sheer effort of listening all day, the need to concentrate non-stop in order to pick out voices amongst the background noise, all this makes it incredibly difficult to do anything other than recover from the school day.

The impact doesn’t stop there. Above everything, cuts like these strike a mortal blow at the values and self-belief that you try to instil in your deaf child. Isla’s mother Sarah puts it better than I can:

“We have spent the nine years that Isla has been in our lives teaching her that she is equal, that she is valued, that she has the potential to do everything her sister can. With one swift funding blow, she is being told the complete opposite… … These constant cut backs cannot go unanswered. There must be accountability for decisions that are unfair at best, and at worst discriminatory.”

I’m a parent of two deaf teenagers. Bringing up deaf children has been the biggest privilege of my life. Deaf children are capable of achieving things that I would never have thought possible before I had my own. There is so much that should be going right for deaf children right now. Give them the right support, when and where they need it, and they will amaze you.

In the last few months alone, I’ve spent time with dozens of deaf teenagers who have the right support in place; they’ve performed Shakespeare in front of an audience of hundreds, started cyber security apprenticeships, won debating contests against hearing peers, explained particle physics to primary school children, learned the saxophone, supported their friends in times of crisis, and more.

And I’ve also seen deaf pupils smash down barrier after barrier placed in front of them – watching 12-year-old Daniel Jillings successfully campaigning this year for the right to study British Sign Language at GCSE has been life-affirming.

But deaf children need the support – especially early on. And far, far too many deaf children aren’t getting even a fraction of it, because the SEND system is no longer delivering.

There are simple, comparatively cheap policy measures that can help. Something as simple as a centralised bursary to attract new teachers of the deaf could help plug the looming shortage - and could cost less over three years than LAs spend on Tribunals in a month.

But training more specialist teachers won’t be enough whilst the SEND system is in the state it’s in. Financially, structurally and culturally, things have to change; if they don’t, then deaf children’s futures will continue to be stolen.

An overwhelming majority of parents of deaf children now fear for their kids’ educational future. And unless the SEND system can be fixed, they’re right to be afraid.

There are simple, comparatively cheap policy measures that can help. Something as simple as a centralised bursary to attract new teachers of the deaf could help plug the looming shortage - and could cost less over three years than LAs spend on Tribunals in a month. But training more specialist teachers won’t be enough while the SEND system is in the state it’s in. Financially, structurally and culturally, things change. If they don’t, then deaf children’s futures will continue to be stolen.

An overwhelming majority of parents of deaf children now fear for their kids’ educational future. And unless the SEND system can be fixed,they’re right to be afraid.

[jetpack_subscription_form title=”Sign up for SNJ new post alerts”]
Follow:
Matt Keer
Matt Keer is the parent of two deaf children. He had to take his LA to the SEND Tribunal, to get the educational provision his children needed. It was a bruising time. In an blog on the NDCS campaign site, he said, "We got there in the end, as a family. We went through Tribunal, some of us broke briefly, but we mended ourselves and the boys finally – finally – now have a full shot at life. It was worth it – but it should have been allowed to be this way."
Matt has dug deep to highlight taxpayer funds paid by local authorities to the law firm in the BS Twitter Storm. He's great at finding and analysing obscure data SEND departments would rather you didn't know about.
Follow:
Latest posts by Matt Keer (see all)