Tania's note: Matt Keer, the parent of children who are deaf, is a whizz at figures. He's written for us before and helped SNJ numerous times. Happily, he's joining now our team of columnists. His first post is very important and analyses a phenomenon we're seeing across England - the outsourcing of EHCPs, no co-production in sight... 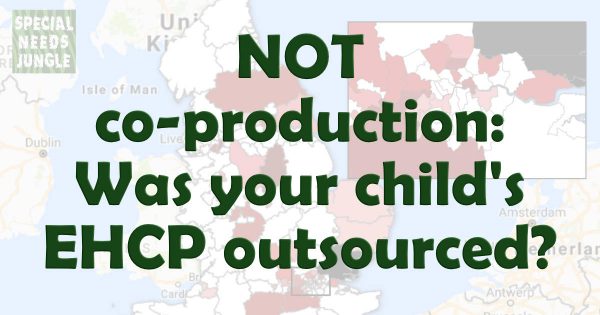 Matt: Does your child have an EHCP? Are they in the process of getting one? Then there’s a good chance that your child’s EHCP hasn’t been put together by your local authority SEN officer – but by a freelancer working for an outsourcing company.

SNJ recently learned that many LAs are now outsourcing the assembly of draft EHCPs to third-party companies. The process appears to work like this:

As a parent, all you see is the EHCP draft from the LA. It’s near-impossible to tell whether or not someone outside the LA has put your child’s EHCP together.

So how much is this happening?

I’ve been digging into the scale and scope of these outsourcing operations. There are several private companies out there actively marketing EHCP document writing services to LAs. And a surprisingly large number of LAs are using them.

From the data I’ve looked at, at least 42 of England’s 152 local authorities have paid money to one of these EHCP writing firms since April 2015. Some LAs use them on a large scale, particularly in London, the South, and the metropolitan North and Midlands.

Together, these 42 LAs have procured at least £1.6 million of services from EHCP writing firms – and business is booming. Tracked spend for the last financial quarter is already 20% up on last year’s average.

It’s hard to tell how many EHCPs are being outsourced nationally – but one firm claims to be processing 1200 EHCPs per month. If that’s a sustained rate, then right now around 1 in 4 EHCPs is being handled this way. 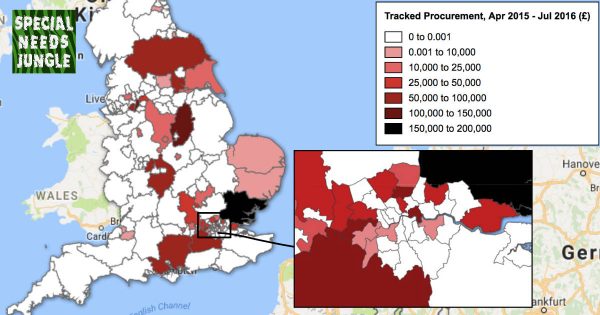 For a full breakdown of each LA that we have published figures, click here.

Why is it happening?

The Department for Education’s data points to an obvious reason: LAs are struggling hugely with the EHCP process. LAs produced fewer than 60% of new EHCPs within statutory timescales last year, and many LAs are doing much worse.

And a bow-wave is developing: LAs also still have to convert over 200,000 statements of special educational need and Learning Difficulty Assessments into EHCPs. They have to do this by April 2018, and they are massively behind schedule.

LAs have a big capacity problem. It is likely that many are turning to outsourcers to solve it.

So why does this matter?

Outsourcing seems to go against the basic philosophy of the SEND reforms. How can an EHCP be person-centred, when the person producing it has never met the child, will never meet the child, and lives hundreds of miles away from the child?

But philosophy doesn’t get the job done. There is nothing inherently illegal about outsourcing EHCP drafting – whether it’s outsourced or not, the LA still has legal responsibility for the EHCP and its content. And with LAs struggling, in principle this could be a way to relieve pressure on the system.

What matters above all is this – are the EHCPs that get produced this way timely, high-quality and lawful documents? Right now, we can’t tell - and there are many questions here that need answers.

Questions to be answered:

Timeliness: Boosting LA capacity through outsourcing should (in theory) result in more EHCPs being turned around on time – arguably a good thing. However, it’s hard to see evidence of improved timeliness in the DfE data. There are several LAs outsourcing on a large scale who are still nowhere near getting even a fraction of their EHCPs done on time.

Quality: There’s no reason - in theory - why outsourcers would be any worse at producing quality EHCPs than in-house LA staff. A lot depends though on what service level the LA demands, how well-trained the freelancers are in SEND process and law, and how the outsourcer’s business model works. All of that is hidden.

What little data there is out there gives cause for concern. The aggregate data I’ve seen suggests that LAs are paying in the region of £55-60 per EHCP. The freelancer producing the EHCP draft will only see a percentage of that. Realistically, if the freelancer wants to pull in more than the minimum wage for an EHCP, they’ll have to knock them out at a rate of more than one per day.

Think about that, and about what it takes to put a single EHCP together properly. Reading & analysing specialist professional reports, crafting outcomes, accurately capturing the views and wishes of the child, drafting the entire document in the template, and – crucially - checking its compliance with SEND legislation and the Code of Practice. All of that has to be done in just a few hours, if it’s going to pay better than a shift at KFC.

And there is a clear hazard here. If freelancers are paid per EHCP, then the quicker they get them done, the more they get paid for a given period of time on the job. That’s not a recipe for quality – particularly if the LA customer is not fussed about quality lawful content either.

Data Protection: Wherever they work, and whoever they work for, people who produce EHCPs have to handle large quantities of confidential personal data about a child. There are strict legal requirements that professionals handling, storing and communicating this data have to follow – and they almost always have to seek parental consent to share this data with third parties.

From here, we simply have no idea how LAs ensure data protection when they outsource. It is entirely possible that measures in place are robust. But this is a working model riven with potential for data protection failure.

We now know that many LAs are outsourcing EHCP production to private companies, some on a large scale. There are potential pros as well as cons to this approach. Outsourcing is not inherently a bad thing.

However, the bottom line still isn’t clear: are outsourced EHCPs, timely, high-quality and lawful? That’s where we need your help.

How you can help

Parents: Do you know whether your young person’s EHCP draft has been put together in-house, or by an outsourcing firm? Have you noticed any change – positive or negative - in the quality, lawfulness or timeliness of EHCPs? Did your LA seek – and receive – your consent before sending your child’s personal data on to a third party?

Local professionals: Does your LA use an EHCP outsourcing firm? Are you satisfied with the quality and lawfulness of the draft EHCP reports you have seen from these firms? Are you satisfied that data protection remains robust, both in transit and at rest? Is this arrangement making a positive difference to your working life, and to the support you give to young people with SEND?

We’d love to hear from you. Get in touch in the comments section on the blog (not on Facebook as they get lost in time), or privately by email

As well as the image map above, I've made is an interactive map with the areas that we have figures for (those in white we have no evidence yet of outsourcing). To see it in full screen where you can hover over each LA listed for the exact figure, click here