If you’re reading this, then you’ll know that the Government reformed the English SEND system in 2014. Inspectors from Ofsted and the Care Quality Commission (CQC) are checking how well the reforms are being implemented. They started inspecting in late May, and at the time of writing, 13 inspection outcome letters had been produced. We covered the particularly scathing one about Surrey on here before Christmas

The quality of these inspections hangs on the capabilities of the inspectors. So who’s inspecting, what do they know about the world of SEND, and what do they bring to the table?

There’s very little out there in the public domain. I’ve been investigating, with the help of a few parents. At best, it’s a mixed bag. At worst, there is cause for serious concern. 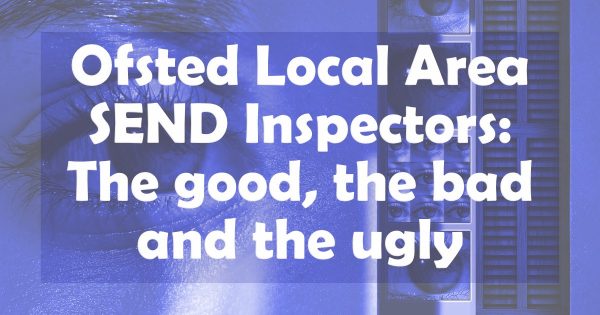 Who are the inspectors?

Each local area is inspected by a team of three people: a serving Ofsted education HMI (Her Majesty’s Inspector) who leads the inspection team; an CQC inspector to cover the health side; and an ‘Ofsted Inspector’ – someone contracted in by Ofsted specifically to support these inspections.

Although I don’t have much information yet on the CQC side of this arrangement, I’ve managed to get some information from Ofsted on the HMIs and the seconded ‘Ofsted Inspectors’.

Ofsted have selected 25 HMIs to lead the local area SEND inspections. Most of them both have a substantial specialism and a successful track record in SEND - as former leaders of specialist SEND provision, special school teachers, behaviour strategy specialists, or mainstream inclusion leads.

Also read: Ofsted/CQC Inspections and parents: More than a feeling?

This is a group of lead inspectors who know what it takes to deliver SEND provision properly, across a wide variety of specialisms and sectors, and many have a successful track record in doing just that. Ofsted deserve plaudits for this.

However, expertise in delivering provision at the coal-face is just one element of what’s needed for these SEND inspections to work well. The inspection teams also need to have a good grip of reformed SEND law, and a strong understanding of what constitutes lawful and effective practice under the new system.

And this is where things start to look less robust, from a parental point of view”.

The contracted Ofsted Inspectors have been brought in to underpin the local SEND inspection teams as system experts. This isn’t a new thing for Ofsted – they contract in serving head teachers to serve as OIs for school inspections, for example, and it seems to work well.

Last year, I asked Ofsted for a list of the OIs they had recruited, and a separate aggregated list of the local authorities that had freed up senior staff for the job. Ofsted provided the OI list, but refused to supply the LA list. Nonetheless, with some background research it was possible to identify the home LA for almost all of them.

Parents frequently report that dysfunctional and unlawful working practices and culture are present in the LA SEN departments that they work with. The Department for Education itself has called out local authority culture as something that has to change if the SEND reforms are to be successful. And yet, LA SEN managers are being brought into the heart of the inspection process – at £335 per day.

We checked. In most cases, the answer is a resounding no.

The first thing we did was check how many came from LA Children’s Services that Ofsted have rated as ‘Outstanding’ or ‘Good’ for social care.

This matters because the organisational leadership will be similar – LA SEN teams usually report to the same strategic management as children’s social care teams. But this grading is also a yardstick that Ofsted themselves normally use when selecting contracted inspectors. For school inspectors, contracted OIs almost always come from schools that Ofsted currently rate as at least ‘good.’

Not a good start. We then looked at one of Ofsted’s sift criteria – a minimum of five years of successful experience in the sector. How many of their selected inspectors met this one?

Using data from the Department for Education, we checked how many of the selected managers come from LAs that finalised all their regular EHCPs within the statutory 20-week deadline in 2015 (the most recent published data). This is just one yardstick – it doesn’t tell you anything about EHCP quality, for example – but it’s an important one.

The findings here were grim.

And worse still, most of the selected OIs come from LAs who are not even close to meeting this new statutory duty:

Disheartened, we tried another yardstick: finalisation of statements & EHCPs for children transferring from primary school to secondary school. Under both the old and the new SEND law, these documents have to be finalised by 15th February each year, to give plenty of time for a smooth transition to secondary school.

This is a long-standing and well-understood statutory duty for every LA SEN manager. Arguably, it is one of their most important duties. And the track record here was even worse.

Not good. And worse is to come.

Our investigations also threw up an even more concerning set of data. Several of the OIs that Ofsted recruited come from LAs that, until very recently, have been enthusiastic users of a now-notorious specialist legal firm - Baker Small.

Baker Small’s modus operandi is well-known throughout the world of SEND; if you’ve managed to make it this far through this blog, chances are you’ll already be very familiar with it. If you’re not, then this June article from The Guardian offers eloquent, damning testimony – not just on Baker Small’s practices, but also on the local authority culture that drives demand for them. Our own post on this caused a stir as well.

Ofsted’s conflict of interest protocol very clearly states what set of values it expects from its contracted Ofsted Inspectors: the very first value it expects to see is “putting children and learners first.”

That’s reassuring, because with values like that, there’s no way that Ofsted would employ inspectors who use the services of a firm like Baker Small in their day jobs, right?

There are seven LAs represented on this list who, until recently, have regularly employed Baker Small for SENDIST tribunal support. And these weren’t just casual dabblers, but enthusiastic consumers of Baker Small’s services. Since the SEND reforms became law, they have procured over £1 million of services from this company. One of them even classified some of this spending as “SEN Therapy.”

Here, it’s important to remember exactly who Ofsted were looking to pick for these inspection roles: strategic & operational heads of LA SEN services. Leaders like this don’t have the bureaucratic muscle to protect their service from the full force of austerity – but they are not powerless bystanders.

Managers at this level almost certainly make and take decisions on how LAs legally conduct themselves at Tribunal. Some of them chose this route. And some of them were recruited for local area SEND inspection duties by Ofsted.

Also read: Honest and useful assessment for children with send is not just about attainment

So what does all this mean for local area SEND inspections?

On the one hand, most of these inspections will be led by in-house Ofsted HMIs who have experience in leading SEND provision, and leading it well. This is a great thing.

On the other hand, Ofsted’s decision to use contracted inspectors from LAs is, for the most part, a poor one. A few of them have a respectable recent track record of service delivery. Most do not.

The whole point of these inspections is to check how well local areas are implementing the 2014 SEND reforms. Ofsted deliberately recruited LA managers to support them in this task – as experts.

But most of the people that Ofsted have recruited come from home LAs that are failing to implement these reforms effectively. Some of them are failing spectacularly. And worse still, some have taken procurement decisions that are diametrically opposed to the interests of children with SEND.

The whole purpose of these local area SEND inspections is to see whether legal reforms are being implemented well. And the word ‘legal’ is crucial here. There is no floor standard for implementation. This is the law. This is statutory duty.

And the collective record of implementing the new law is not good enough, in my view, to earn LA SEN leaders a ticket serving on Ofsted / CQC inspection teams. Not yet. Not with this track record. Not at £335 per day. And not ever, if you have chosen to spend scarce funds on types of legal service that DfE’s Minister of State Edward Timpson describes as ‘totally unacceptable.’

Why has this happened?

I really don’t know why this has happened. The most likely explanation is that we are simply looking at an initial failure of due diligence. Ofsted have not yet ‘signed off’ every one of these contracted inspectors for duty; we can only hope that they are looking harder, and looking wider, for inspection expertise. In other areas – school inspections, for example - Ofsted have certainly been willing to re-examine their pool of contracted inspectors and take action.

Another, less enticing prospect is that Ofsted decided that the stringent criteria they use for contracted school inspectors simply aren’t necessary for contracted SEND inspectors. I hope that isn’t the case. If it is, then I would be lost for words.

But one of the main reasons that we all need accountability so desperately is the type of organisational culture that’s in place in too many local authorities. That culture has been brought into the inspection set-up. And that’s worrying.

I know you're going to ask which LAs they're from. You've reached the end so here it is - table of Ofsted SEND Inspector areas

**Update.. Ofsted have asked for a right of reply, so watch this space.**
**Update 2.. Some colourful titbits that didn;t make it into the post above, shared on Twitter instead**
What didn't make it into @CaptainK77 post on SNJ yesterday...


Follow:
Matt Keer
Matt (he/him) has two deaf children. He has over 20 years of experience grappling with the SEND system as a parent, and he’s seen the best and the worst that the SEND system offers.
Matt specialises in SEND stats, data analysis, and in-depth investigations of policies. He has given evidence to several Parliamentary Select Committee inquiries, and his articles for SNJ on SEND funding, local government policy, and the SENDIST Tribunal have been quoted in Select Committee inquiry reports and national media.
Follow:
Latest posts by Matt Keer (see all)