Six months ago, Ofsted & the Care Quality Commission began inspecting how well local areas are implementing the September 2014 SEND reforms. At the time of writing, they’ve published 13 ‘outcome letters’ showing what they discovered during their inspections.

Each of these letters outlines the strengths and weaknesses of the local area’s SEND setup. But so far, only two local areas – Rochdale & Surrey – have concerned inspectors enough for them to activate their most serious sanction – instructing the local area to write a statement of intent. 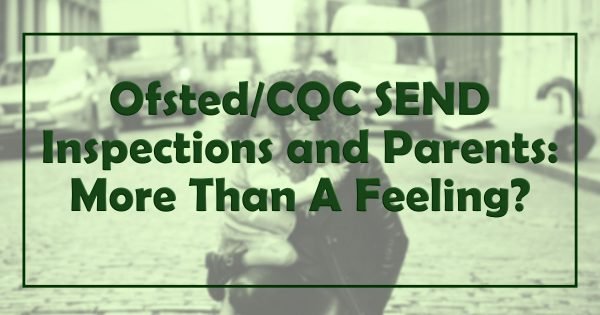 Two weeks ago, Ofsted published their annual state-of-the-nation report. On pages 87-88, you’ll find mention of these local area SEND inspections. And they had the following to say about the first eight local areas they looked at:

“In these first inspections, each local area was meeting its statutory obligations.”

The truth in statistics:

Over 1,000 separate statutory breaches, in just eight local areas, based on a 10-minute scrub of publicly-available data. And yet, Ofsted’s annual report says all these local areas are meeting their statutory obligations.

From a parental perspective, something is not right here.

I think that Ofsted & CQC leaders are committed to the principle of inspecting well, without fear or favour. There are good people running these inspections, people who know what it takes to do SEND provision well.

All the same, there are flaws; some of them big ones.

One of the biggest is the way the inspection teams depend on seconded ‘expert’ senior managers from local authority SEN services and I’ll cover that in another SNJ article soon.

Another issue though is how parents and carers are fitting into these inspections: how inspectors get our evidence, how good our evidence is, and sometimes, how our evidence seems to be weighed up. Things look like they are improving on this score – but there are things we can do to help.

Local areas get a week’s notice that Ofsted / CQC inspectors are coming. The inspection team relies heavily (but not totally) on local authorities and established parent-carer forums (PCFs) to spread word that they are in town. Once they arrive, inspectors collect ‘parent views’ via three main ways: meetings with the PCF, talking to parents at the placements they visit, and an online webinar.

There is no easy way for Ofsted & CQC to skin this cat. Parents are spread widely and thinly; they aren’t always well connected to PCFs or social media groups, they can’t always meet inspectors during school visits, and they can’t always attend webinars.

Nonetheless, the experience of the last six months indicates that the current arrangements are frail. The notification process relies heavily on the good faith and effectiveness of local authorities and PCFs. If you can’t rely on either, then it’s a major challenge for many parents to find out these inspections are even happening, much less get involved.

Parental participation in online webinars so far has been highly variable. Less than 10 parents have taken part in some webinars; in others, around 130 joined in. And the webinar itself is a flawed way to collect evidence from parents - 4 yes/no questions, with an unstructured comment box. The questions are broad-brush, superficial, and sometimes unfit for purpose – here’s one:

“Since September 2014, have your child’s needs been effectively met?”

In my case, the answer’s yes, but that doesn’t tell you much. I had to invoke the law repeatedly to get my LA to meet my kids’ needs effectively. Only a fool would interpret “yes” as evidence of a local area working well.

The Ofsted / CQC local area inspection handbook requires inspectors to seek parental “views” as a “crucial” and “central feature of inspection activity.” That sounds laudable. I’m not sure it is.

The choice of the word “views” here is important. “Views” are information that might be based on perception, opinion, and emotion. “Views” might be tied to reality, or they might not.

There are two frustrating things about this. Firstly, parents are perfectly capable of supplying hard evidence. The SEND process throws it up, in spades. I can map where, when and how the local authorities I’ve lived in succeeded and failed to meet their legal obligations to my kids. “Views” did not get my kids’ special educational needs met. Explicit evidence did.

The second big problem with treating parental evidence as “views” is that it can allow bias – conscious or unconscious – to seep into the evaluation of parents’ testimony.

On the other hand, when parents criticised local areas, their evidence was usually written up with more emotive language:

For most of these cases, parents will have been capable of supplying hard evidence to back up their views. Were they given the opportunity?

If parents and carers had a clear opportunity to provide detailed evidence and didn’t take it, then fine.

But if parents didn’t have a proper opportunity to present hard evidence or to have it taken seriously by inspectors, then that is light years away from fine.

Many of the situations here that parents are described as ‘feeling’ are breaches of the SEND Regulations and/or the SEND Code of Practice. Did inspectors even realise this?

This might just be occasional, unconscious bias. Some of the most recent inspection outcome letters have been much more neutral in the language that’s used to characterise parental evidence.

But it is a form of bias that many, many parents of SEND children have experienced when trying to work with local areas. Credible, reliable evidence, expertise by experience, dismissed as “Mum feels that” or “Dad is worried that.”

Nancy Gedge – a parent of a child with Downs Syndrome, a teacher, and an all-round top person (and also SNJ columnist) sums up this subtle, insidious professional ‘othering’ in this post on her own blog.

One of the guiding principles of the new SEND legislation is partnership – parents working as equals with professionals, as experts in their child through experience, as full members of the team. Partners, not spectators. This can, and surely must, apply to the process of inspection too.

So what can we do?

If you are a member of a well-organised, well-prepared, fearless and representative PCF, then get involved. Hertfordshire Parent Carer Involvement’s approach to their local area inspection is a great example of what can be done. Herts PCI put in some serious groundwork before the inspection, collected detailed survey responses from over 600 parents, and handed it over to inspectors when they arrived.

You might not have a PCF like this. If you don’t, then don’t give up; send evidence to inspectors singly, or get organised via Facebook groups. But think hard about the way you present and structure your evidence:

Tips to structure your evidence for Ofsted/CQC SEND Inspections

None of this guarantees that inspectors will act on the evidence you provide – but it increases the chances that they might. And if nothing else, Ofsted won’t be able to claim in next year’s annual report that failing or delinquent local areas are meeting their legal obligations.