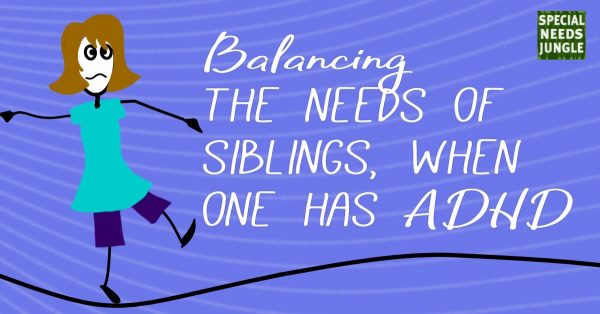 In a class of 30+ children, a teacher’s prime objective is to make sure that everyone is working to the best of their ability. Their attention is inevitably drawn to those that demand it, while the ones who have their head down and are working diligently may be left to ‘get on with it.’

Maybe later the teacher might realise that they have not paid enough notice to the ‘good’ ones and remind themselves to do so. But then the next lesson comes and the pattern can repeat itself. It requires concentrated effort and organisation to make sure that all the children receive the same care and attention. On a daily basis that is almost impossible. But on a weekly basis, it should be attainable with enough planning and forethought.

Parents know that they should treat all their children equally. But in the real world, some require more effort and attention than their brothers or sisters. The parent of a child with special needs knows this all too well. The siblings of such a child just have to live with it. This state of affairs is exacerbated when the child who is different has an undiagnosed difficulty, as there is no anchor to latch on to; no tailored provision and an uncertain future.

My husband and I had always planned to have two children. When we realised that our first-born had behavioural and associated learning issues, we saw no reason to change our plans. We wanted him to have a sibling. Someone who could be his friend, playmate and life-long support.

We led him to believe that we were having the baby for him. I cringe as I write that because we had no idea of the consequences. He came with me for the first scan. He was the first to see that it was a boy, before me and before his dad, who was away. He was totally involved with the pregnancy, as I didn’t want him to be jealous of the new baby. I wanted him to be as enthusiastic as we were.

This was left mainly to me, as his dad was away most of the time or working long hours. I did a good job, but I had forgotten an important factor: This new baby would have his own character. This, as yet unformed human being, would grow to be an independent person with his own thoughts and feelings. Unwittingly, I had created a rod for his back even before he was born.

The birth of our youngest boy was far less dramatic than that of our eldest and a miracle happened the first night I was home from the hospital. The eldest slept through the night for the first time in 4 ½ years! Maybe he was worn out by anticipation, but from then on his sleeping was infinitely better, thank goodness. I had a lot to be thankful for, as this baby was doing everything that the books had told me but I had never seen before.

In fact, except for occasionally saving him from an over-enthusiastically helpful brother, all was well. That is until the baby became a toddler who made it clear that he didn't always want to play with his brother. The baby was changing but the older boy could not adapt to the new version. He still wanted his playmate and when he saw that his brother could easily make friends of his own, he wanted to know how - and why they didn’t want him to play too.

Our youngest was constantly seeking to escape from his demanding brother and I was constantly seeking common ground between them, so they could enjoy each other’s company. I wanted nothing more than that they would play happily while I ‘got on with things.’ But as the eldest, at that stage, never thought through the consequences of his actions, ‘playing’ could have an element of risk and I had to be watchful.

When one child is more demanding than the other, life is usually all about that child, whatever good intentions you have of not making it so. I made the mistake of taking the youngest one’s good behaviour for granted while pleading for tolerance and understanding of his brother. I didn’t recognise how much patience he was actually already showing and should have praised that before asking for more.

He was very happy to keep himself occupied and I shamefully exploited that. As he got older, I began to rely on him too much for moral support and good company, so he gradually withdrew from our cosy chats becoming super-independent and self-reliant. I don’t blame him! He also found out that friends' families with children who were not so challenging were generally far more relaxed company and would, unsurprisingly, prefer to be there than at home, among frequent turbulence and conflict. Although he never said as much, I am sure that there was some embarrassment as well, at school and with friends who didn’t understand his brother’s behaviour. In the beginning, we also had to downplay his academic progress such as learning to read because he was quickly overtaking his older brother (although that is no longer the case).

But the biggest burden that I put on him was that before he was born, I thought I was a failure as a parent. I didn’t know why or how, but I believed I certainly wasn’t doing something right. Then he arrived and he did everything that babies are supposed to. Parenting him gave me back my self-esteem, my courage and literally saved me. But he knew this and what a responsibility to have! How guilty I feel, in hindsight, to have put it on him. We still didn’t have a diagnosis for his brother but I knew it wasn’t my entire fault, at least.

I wanted him to love his brother and he does, but even as adults, their relationship is not an easy one. The bond I hoped for has never truly formed and I wonder how much of that was indeed due to how I parented my youngest.

What would I have done differently?

We all know that hindsight has 20/20 vision, but knowing what I now know, what might I have done differently? Here are a few things that come to mind:

This is a very personal blog so before sending it to SNJ, I asked my sons to read it and ask if they were okay with it being published. Both were, which I was pleased about. But I was especially touched by the eldest’s reaction as I have always told him that our experiences could help others and now I think he understands.

‘It’s fine, lovely read really.’  Short and to the point, reflecting a lifetime of learning to live with and finally accepting his difficulties.

Here are some resources for support: