It can be hard to cope with having a child with a disability. It can be particularly hard on relationships.

A report out today has found that one in three of parents of children with learning disabilities is in a relationship, which would be described in the counselling room as ‘distressed’ (compared to one in four parents in the general population)*. The research also found that they're more likely to feel lonely, have less time for 'date nights' and identify money worries as a strain on their relationship.

Key findings highlighted that top relationship strains include the lack of quality time parents of a child with a learning disability have available for one another. Nearly a quarter (24 per cent) only find time for a date night once a year or less, compared to less than a fifth (17%) of other parents. And hey, let's face it who has the energy for date night anyway?

Finances were also a factor: four in ten (39 per cent) parents of a child with a learning disability identified money worries as a strain on their relationship – compared to 29 per cent of other parents. Again, no surprise. It is extremely hard for both parents to work full-time when one, or more children has a learning or other disability. Then, if the marriage breaks down, money is even more scarce. 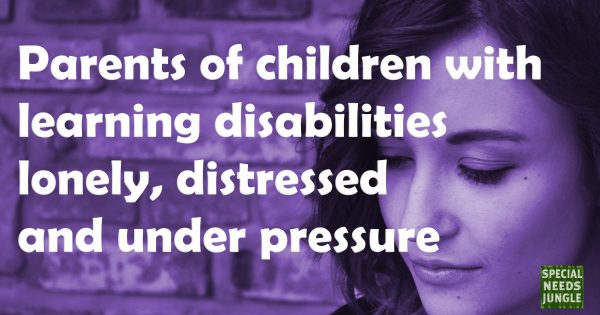 The report says mental health was the second biggest relationship strain, with one in four (24 per cent) identifying this as an issue – more than twice as many as other parents.  In my experience, many, many parents I know need to access psychiatric medication such as anti-depressants. I don't even think it's unusual. It's more unusual to have easy access to talking therapy, even if the whole family.

I'm not sure why these figures of loneliness and depression would come as any surprise to anyone parent of a disabled child. Friends without children with SEND may fall away, your children may need to go to school by taxi or a drive away so there are no local relationships with other mums. It's one of the reasons there are so many Facebook groups for SEND parents - you need someone to share your experiences with who will a) understand and b) be able to offer advice from experience.

Ramya Kumar, 38 and from Swindon, parent of nine-year-old son Rishi who has autism and a related learning disability said, “Caring for my son has in many ways taken over my life. Caring can sometimes be 24/7 and I’ve felt like, in some ways, I’ve forgotten how to be a wife to my husband. We rarely get to go for meals as a couple and can sometimes feel isolated from society due to the attitudes of other parents to disability. But, we wouldn’t change anything about Rishi. He’s given me the priceless gift of perspective and has made me a better and stronger person."

Ramya also said, “Many of the challenges we face can be solved by having the right support from local authorities and acceptance from the public. Rishi gets respite care for four hours a month. We’re lucky that our local community nurse has been a pillar of strength. Her support has made a huge difference to our lives. Our major worry at the moment is about Rishi’s future and making sure he gets to be fully part of his community - it’s created a great divide in opinion between my husband and I. But nothing can replace the boundless love and joy that Rishi has given us. If we had known about the support available and if it had been there from the start, some of these challenges could have been avoided.”

Some families don't get the support they need though and relationships don't just come under strain, they break down completely. Others can be strengthened by pulling the same way, instead of apart. Like any relationship, it depends on the personalities and the strength of the relationship's foundations to start with. But under this kind of stress, cracks and discord can be amplified.

The Children and Families Act was supposed to look at this kind of thing more closely, as part of putting the family at the centre.  Carer's Assessments, access to short breaks and family therapy should have been easier to access. But with cuts to services biting, the boost to mental health spending as part of Future in Mind not materialising, and the SEND reform's culture change still being on the to-do list, it's no wonder families are feeling under pressure.

Read the whole report here. Add your view below.