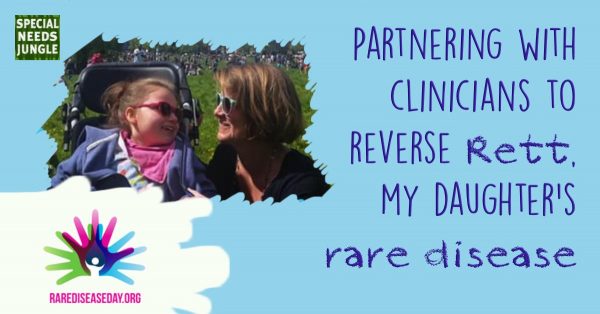 “Did you say ‘Retz Syndrome’? How do you spell it?” These were the questions I asked the neurologist who speculated in passing that this might be the explanation for why my 15-month-old daughter was not like other people’s babies. His communication skills were not as good as his diagnostic ones: he threw it out there, told me nothing further, and ended the consultation quite abruptly, leaving me to go home and Google.

I knew she had something, had suspected it might be cerebral palsy, and needed a doctor to give me a name for it so we could begin the process of adjusting to our re-designed lives.

It was another six months before Rett Syndrome – that’s how you spell it! – was confirmed, and life with a rare disease was officially underway. In the meantime, I Googled the hell out of it, searching every corner of the Internet for explanations of why she had it and what it meant, as well as clues to how we would cope, what she would need and who else was out there living with this thing.

Becoming a Rett expert by experience

When you have a child with a condition that most people have never heard of, including most of the professionals you encounter, you quickly become an expert. I got used to people’s blank expressions when I said “She has Rett Syndrome”, and developed the clearest explanation I could give in the shortest time: “It means her body can’t do what her brain wants it to. She can’t talk, but she can understand you.”

And here’s the longer explanation: It’s caused by a spontaneous genetic mutation that affects mainly girls, with prevalence of around 1 in 10,000 to 15,000 female births. When the gene mutates, it switches off a vital protein that’s necessary for the brain to develop and make connections. This causes all kinds of physical chaos.

In some ways, it was quite helpful that very few people had a mental picture of what a child with Rett Syndrome was like. We were spared having to deal with people making their own judgements about whether our child’s diagnosis was correct or whether we were doing the right things with her, in the way they often do about a child with a diagnosis of autism, say. We became the authority on her, and my control-freaky side quite liked that.

At the same time, I was desperate for someone who really knew and understood Rett Syndrome to tell me what we should do to help her develop and achieve as much as she possibly could. What types of therapy would help most? Where should she go to school? What would her life be like as she grew older? What should we fight for, and what should we let go? My biggest fear was that we would fail her.

Finding a community of parents online, some on our doorstep and some on the other side of the world, helped me work out the answers to these and other questions. It also led me to an astonishing discovery, not long after my daughter Amy’s diagnosis: Rett is potentially reversible, and the groundbreaking efforts to reverse it have been driven by parents.

In 1999, researchers in Edinburgh pinpointed a single gene, MECP2 on the X chromosome, that mutates to cause Rett Syndrome – meaning that the biological mechanism behind the condition is simpler than previously assumed. The same researchers, subsequently joined in their efforts by many other scientists around the world, set about working out how to restore the function of the MECP2 gene and associated protein.

In 2007, the year that Amy was born, they reversed symptoms of Rett Syndrome in laboratory mice and restored normal function – an outcome that no-one had predicted. The possibilities of this are overwhelming. Could Rett Syndrome really be the world’s first reversible neurological disorder?

Now, it’s a long road from making something happen in a lab to changing the lives of children who are locked inside bodies that won’t work. Since 2007, families of girls with Rett Syndrome have got together to raise funds to keep the research going towards the outcome we all hope for. It wouldn’t happen without these efforts, as governments don’t tend to fund research into rare conditions.

Parents in partnership with clincians

Parents are working in partnership with scientists and clinicians internationally to identify which research areas appear to have the greatest chance of success, and to ensure that efforts are focused there. The projects are closely monitored and peer-reviewed. Here in the UK, Reverse Rett – a parent-led charity that is ‘focused on science and founded on love’ – is working to ensure that as treatments for Rett Syndrome become viable, they are accessible to patients here.

As well as funding research, Reverse Rett has set up a national patient registry and facilitated the first clinical trial for Rett Syndrome in the UK. All these things happen while parents also have their own local battles for the services and support their daughters need right now.

It’s not that we don’t love and accept our children the way they are. But there’s an important distinction to be made between accepting a person, and their place in the world, and their right to the best of everything we can give them – and accepting a condition that robs them of the ability to live comfortably in their bodies and to communicate their thoughts.

The world that children like my daughter live in is a difficult place: but even if society, overnight, became fully accepting of disability, and if all the barriers that stand in their way were to disappear, their lives would still be harder than any parent would want their child’s life to be.

Many parents are fighting on a lot of fronts at once. No-one imagines that it’s what they’ll end up doing, but it’s just how it is. We’re fighting for services, fundraising for research (and participating in it), and teaching people about our children and the rare conditions they live with. But why would we not? These are our children. And making things happen is what parents of children with special needs and disabilities are uniquely good at.

Other posts about Rare Disease on SNJ

Follow me
Catriona Moore
Catriona Moore has a background in policy and communications and has worked for a number of health, social care and disability organisations.

When her younger daughter was diagnosed with Rett Syndrome in 2009 shortly before her second birthday, Catriona found herself dealing in practice with things she’d previously thought she understood in principle.

She juggles her work as policy manager for a national charity with caring and advocating for her daughter. She's passionate about improving the lives of disabled children and their families, and making the systems that should support them work more transparently and equitably.

Catriona writes for Special Needs Jungle in a personal capacity, and all views expressed are her own.
Follow me
Latest posts by Catriona Moore (see all)

Catriona Moore has a background in policy and communications and has worked for a number of health, social care and disability organisations. When her younger daughter was diagnosed with Rett Syndrome in 2009 shortly before her second birthday, Catriona found herself dealing in practice with things she’d previously thought she understood in principle. She juggles her work as policy manager for a national charity with caring and advocating for her daughter. She's passionate about improving the lives of disabled children and their families, and making the systems that should support them work more transparently and equitably. Catriona writes for Special Needs Jungle in a personal capacity, and all views expressed are her own.
View all posts by Catriona Moore →