For most adolescents, moving into adulthood is a natural progression and the move from school to a job or to further or higher education is an expected rite of passage.

For young people with disabilities however, this is far from the norm. Further education for them needs to encompass the academic and the practical with the expert support needed for them to succeed.

Ofsted has just published a report called Moving Forward that found that too many young people with learning difficulties and/or disabilities are poorly prepared for adult life. The report explored the early implementation of the Children and Families Act 2014, which extended statutory protections for education up to the age of 25 where needed.

In the past, ineffective arrangements between education, health and social care agencies have impacted on the ability of high needs learners to successfully transition from school, to post-16 provision and to adult life. The reforms made a firm commitment to tackle this. Ofsted’s report finds that, of the local authorities and further education (FE) providers surveyed, the implementation of the Act had not been fully effective. This means the support that many of the 22,000 high needs learners received, varies considerably.

Clare Howard, CEO of the Association of National Specialist Colleges, that provide specialist further education, has written for SNJ about the report and the issues our sons and daughters may face when finding high quality learning as they approach adulthood. 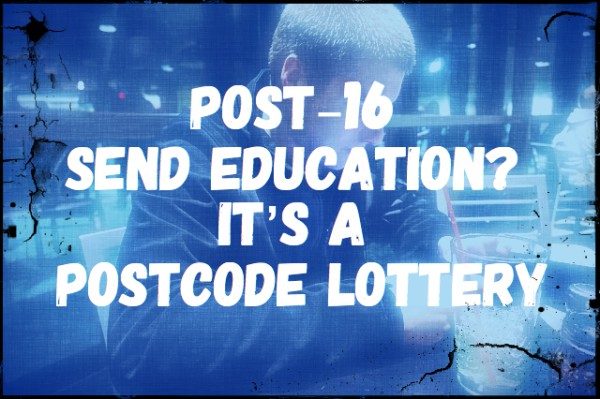 Clare Howard, CEO of the Association of National Specialist Colleges

The new Ofsted report highlights the “postcode lottery” of practice and support across the country for young people with disabilities and learning difficulties.

For parents of teenagers with disabilities and learning difficulties, the survey reflects what many have experienced - that more needs to be done to ensure young people with disabilities receive appropriate information about their FE choices and are able to access education that suits their needs.

Ofsted visited 17 providers, including four specialist colleges and spoke to 1,600 young people between January and March last year. They found that many young people, particularly those with more complex or profound learning difficulties or disabilities, had received “insufficient information” about the full range of opportunities to them.

Ofsted is critical of the advice given to high-needs pupils by schools and local authorities and the lack of detail available to post16 providers about the pupils they take on.

The report warned that schools and local authorities, often recommended a post-16 provider within easy reach and where they had established relationships, rather than “considering individual learners’ educational and support needs, interests and aspirations”.

The report highlights a number of concerns about arrangements, including:

The Ofsted report reinforces what the Association of National Specialist Colleges (Natspec) has been advocating. Too often learners and their families are not aware of the full range of choices available and we want local authorities to provide more detailed information on provision and that they should focus on the individual needs of learners, rather than recommending the nearest provider.

It comes more than three years after Ofsted warned, in its August 2012 report on progression of high-needs learners, that schools, local authorities and other agencies did “not work together sufficiently well to ensure that learners were adequately prepared for transition between school and post-16 provision”.

However, Ofsted praised specialist independent colleges and providers which offered a more holistic support and ensured there was a strong emphasis on life skills and real workplace experience. It stated that established independent specialist colleges inspected had good access to specialists including speech and language therapists, physiotherapists and occupational therapists. They had developed excellent links and were skilled at combining the services they provided for different learners to save staffing costs.

Natspec members have reported many examples of the issues young people with disabilities and their families are facing. One student with challenging behaviour and complex health needs was progressing well in a residential college in the North West, giving him new opportunities to learn and giving his family the chance to focus on their other children whilst also being confident his care and education needs were being met. Mid way through his first year, he was told that the place would not be available for the second year and he was sent back to his family, who then had to give up work to care for him, including getting up several times in the night to move him due to his condition. The breakdown in the placement had led to massive strain on the family who now face continued uncertainty about his long term future.

Meanwhile, another student in the North East was encouraged to attend a mainstream college for part of the week. The therapists at his specialist college had been able to ensure that problems with his arm and hand movements were alleviated so that he could take part in learning activities. However the mainstream college did not have the staff to give him the support he needed, and his timetable did not allow for his health needs to be met alongside his education.

The report makes a number of recommendations to government, local authorities and FE providers to help improve the standard of support or high needs learners. These include:

We agree wholeheartedly. The Children and Families Act was aspirational in its ambitions. It was all about joined-up thinking - about cohesive education, health and care planning from 0 to age 25

According to a report by law firm Boyes Turner, the implementation of the new reforms have cost the taxpayer nearly £0.5 billion, yet young people and their families report they still have to fight the system to gain the right support and education.

We all need to work together to achieve the ambitions of the act and ensure young people with learning difficulties and disabilities reach their true potential.