We're really pleased that SNJ is attracting many more teaching professionals and other SEND practitioners to our readership. In the end, we all have the same goal - ensuring that children with special needs and disabilities - our children - get the support they need to reach their potential, whatever that may be. To that end, we are delighted that leading SEN professional, Malcolm Reeve, became one of our columnists last year. You can read his first post here. Malcolm is Executive Director for SEND & Inclusion at Academies Enterprise Trust (AET) - the UK’s largest academy chain. Malcolm, a former headteacher of three schools, has worked in the field of SEND for 30 years. In that time he's worked in adult provision, mainstream schools and special schools.  He's worked with children of all ages and with learning difficulties ranging from moderate to profound. In his second column, Malcolm Reeve reviews SEN data in England and the implications around ensuring proper identification is in place to ensure appropriate and robust support is available for teachers and school staff.

Many of you would have heard 19th century British Prime Minister, Benjamin Disraeli’s famous statement: “There are three kinds of lies: lies, damned lies, and statistics.” Perhaps less well known is Carly Fiorina’s quote: “The goal is to turn data into information, and information into insight.” Data is important in education generally but it is particularly important for us to analyse, reflect on and challenge in the field of special educational needs. Every year, the Department for Education produces a report titled ‘Special educational needs in England’, which is based on data collected from all schools and local authorities (LA’s) in January each year. In fact, the latest data was collected on the 15th January and the reports related to this will be released in January and September this year. The two sources of information collated are the School Census data, completed by schools recording pupils with and without statements, and SEN2 data from LA’s. SEN2 collects information about the numbers of children with statements and new statements issued in the previous year. So let’s reflect on what the Special Educational Needs in England 2014 data tells us. 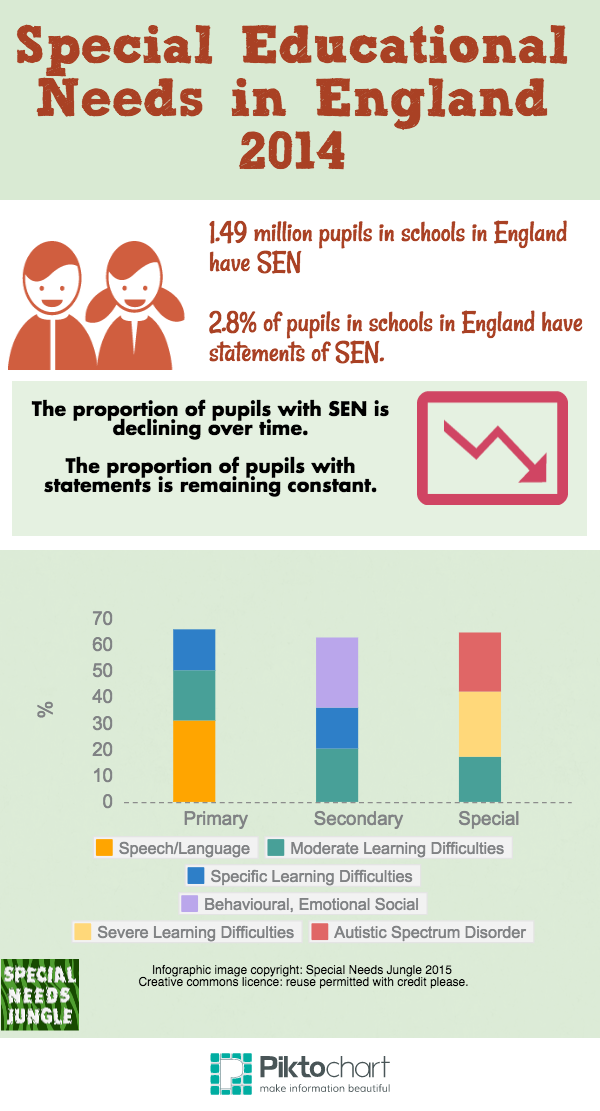 Now let’s consider the types of SEN, which are reported on for pupils with statements and for those at School Action Plus (not for those on School Action). The main types of need at primary, secondary and special schools are: Primary

This shows that there are significant differences between the main types of need in primary and secondary. The increase in the numbers of identified BESD children in secondary settings, alongside the reduction in SLCN needs, is the most marked difference. Overall the most common SEN need for children to receive statements in is Autism Spectrum Disorder, which has been increasing since 2010 (as has SLCN). Just over a quarter of children with statements in England attend state-funded mainstream schools.

In general we over-identify numbers of children with SEN. In some cases, children are placed on SEN registers in schools for no sound reason. A child can be placed on the SEN register in secondary school because of a test they sat at the beginning of Year 7 or because they were on the register in primary school. Schools need to ensure they have a sound referral process in order to ensure that children with SEN are properly identified and a review process in place to ensure those who do not have SEN are taken off the register. In my experience the sign of a poor register in schools is where large numbers of children are identified, particularly in the area of Moderate Learning Difficulty. Many children with SLCN are misidentified as having either Moderate Learning Difficulty or BESD. Research suggests that over half of children with Speech, Language and Communication Needs (SLCN) go unidentified and this is likely to increase in areas of disadvantage. In addition, we know that children with dyslexia regularly go unidentified, or if identified, they do not have their needs met. The issue of accurate identification is crucial because it is the first step towards giving children the support they need. After all, if schools do not know who the children are then how can they possibly support them properly? One of the positive impacts of the SEND Reforms is that they are forcing schools to re-examine their registers and take a close look at identification. It will be very interesting to see how the numbers and types of identified SEN changes in the next two annual reports and the impact on the support that is put in place to meet their needs.

Where is the expertise?

The main intervention a child with SEN needs is access to good quality teaching by teachers who fully understand the child’s needs. Once identified, children with SEN need focused and specialist interventions to ensure they receive the support they need. However, despite having nearly a fifth of our children identified as having SEN, we endemically fail to train teachers or support staff fully. A radical programme of comprehensive initial teaching training in SEN and national training programmes for existing teachers and leaders is necessary. We are seeing progress in this area (and I have had the pleasure of visiting some excellent mainstream settings) but it is not fast enough or wide enough. As long as this situation lasts the concern will remain that children, particularly in mainstream settings are less likely to receive the support they deserve. Whatever the data says, accurate identification and staff training so that support is effective must be the key priorities. Follow Malcolm on Twitter @Malcolm_Reeve  [1] Behaviour, Emotional and Social Difficulty was being replaced by Social, Emotional and Mental Health in 2014-15

Looks like the numbers before the decimal point been cut off?

Hi Eva, yes thanks I have noted this and will look into it with M.