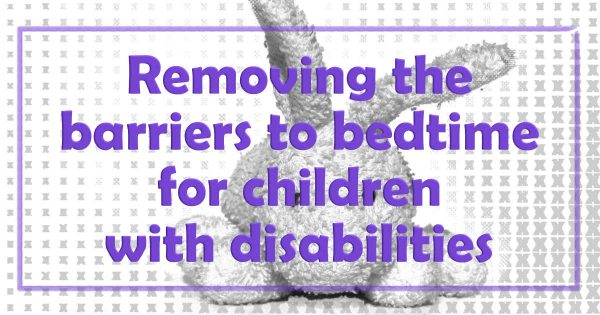 I have to admit that for a while, R and I joined the ranks of Smug Parents.  We didn’t mean to.  Most of the time we are running around in a sort of fighting fires kind of way, but for a while we hit the Smug Spot.  For a while we were convinced we knew what we were doing.  We had Sorted Bedtime.

When Sam, our eldest and the delight of our hearts, was born, like most new parents, we struggled with a lack of sleep. This was compounded by his Down’s syndrome, which brought on a serious case of anxiety over his health.  There were a few times when he was really poorly and we were up and down like yo-yos, checking that he was OK, giving him a quick prod, just to make sure.  During those early months, we, like all other new parents, struggled to set a bedtime routine that meant he went to bed – and stayed in bed.

We thought we’d got the bedtime routine sorted (bath, milk, story, cuddle, hair stroke, bed), but then he had a stay in hospital (long story) and it all went to pot.  We got our toddler back and nothing we could do apart from sitting in the semi-darkness waiting (and waiting) would do.  We missed hours of early evening telly.  We became obsessed with sleep.

In the end we resorted to charts and bribery – and then it happened.  We had three children, and all of a sudden we had gained the ability to put them to bed.  Apart from the inevitable wet beds, high temperatures and vomit, they went to bed, and they stayed there until the morning.  We were Smug.  When we listened to tales of other parents, tearing their hair out over constant demands for water, or the correct cuddly, or crawling out of darkened rooms on hands and knees, playing musical beds in the night, we smiled softly and congratulated ourselves upon our cleverness.

Until recently, that is.  One of the things about Down’s syndrome is that change sneaks up on you.  There is something about it, something about the way that development is not arrested but running in slow motion that lulls you into a false sense of security.  Before you know where you are, years have passed and you haven’t realised that what you have is a fifteen year old, with a thirteen and ten year old snapping at his heels, and you are still stuck in the same old routine.

When I came to think about it, when I sat on the sofa one evening, tired, and reluctant to join in the nightly performance of chasing the children into bed, I began to wonder if we didn’t actually, have a problem.  And I began to wonder if the problem wasn’t so much them (or him) but us.

I suppose the thing is, that when you are in the middle of things it is difficult to see what it is that you are doing wrong.  You are so close to events, responding so immediately in a present that you just want to work that you forget all sorts of things.  You forget how old (or young) your children actually are.  You can even forget where it is you are supposed to be heading.  And you can certainly start to blame the difficulties you are experiencing on them, rather than looking critically at your own behaviour.

One of the nice things about the hubs is that we don’t need to have very long discussions in order to effect change.  We don’t need to call a meeting, or fill in some forms, make formal observations or write out a behaviour support plan.  A glass of wine and a chat over some not-really-telly-watching is pretty much all it takes.  We understand each other, and we are united in our desire for a free-er from stress evening and children who grow in independence and move steadily away from the things they needed when they were small.  We sat down one evening, and we decided to change.

So why have I written this?  Why have I told you an inconsequential little tale of bedtimes, a tale that, on the surface, is easy to dismiss?  You see, the thing is, I have spent a while lately thinking about and attempting to explain the social model of disability to various people.  It’s awfully easy to understand when it’s all about a wheelchair, but not so much if it’s in the classroom (or the home) and it’s about behaviour, or learning.

We forget, when we are in the middle of challenging times, that removing barriers is something that happens all the time – and in a hundred million little ways.  And once we realise what we are doing in one area of our lives (or classroom), we can begin to apply the principle elsewhere.

Follow me
Nancy Gedge
Teacher & blogger at Not just an ordinary boy
Nancy is a SEND teacher in a mainstream primary school and writes about issues relating to teaching and parenting. Nancy's eldest son has Down's syndrome. Her blog, "A Not So Ordinary Diary" won her the TES Teacher Awards Teacher blog of the year 2015.

Follow me
Latest posts by Nancy Gedge (see all)

Nancy is a SEND teacher in a mainstream primary school and writes about issues relating to teaching and parenting. Nancy's eldest son has Down's syndrome. Her blog, "A Not So Ordinary Diary" won her the TES Teacher Awards Teacher blog of the year 2015.
View all posts by Nancy Gedge →