It's somewhat more than fashionably late and let's hope, as I said the other day, that the reason is because it has been carefully crafted to be so good that no one can raise a single objection.

Branded by both the Departments for Education and Health, the revised Code of Practice has made its appearance with a day to spare before the Easter break, so we can all read it while we munch through our chocolate eggs.

It's 253 pages long, so you may have to wait a while for a thorough analysis. 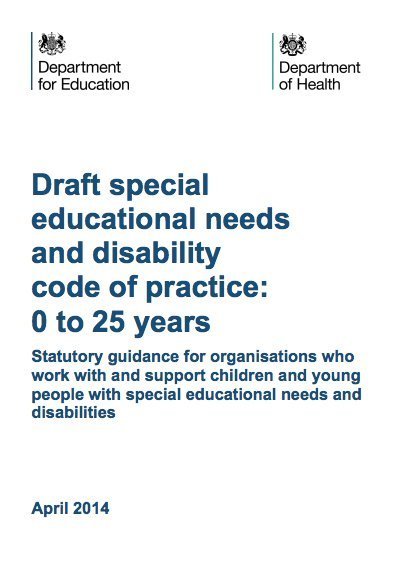 However, there is a big chunk at the back, Annexe 1 which covers Mental Capacity. Having had a quick scan, it actually seems quite reasonable and says that mental capacity can be adjusted on a decision by decision basis, without need for a full reassessment each time. It also details that a young person can ask anyone, including their parents, to help them make a decision even if they are judged to have 'mental capacity.'

Was this already written before Jane McConnell from IPSEA raised the issue in her "Red Light" post and we looked at it in more detail? Or have those busy DfE policy scribes hurried to put right an unfortunate oversight kindly brought to their attention?

Well, it is an Annexe (the only one), bolted on right at the back and it does seem to have looked at and answered the issues that have been highlighted.  However it got there, it's there and to my non-legal eyes and at first read, it looks quite comprehensive. And that's all that matters.

The first draft had a public consultation that closed last December with more than 700 responses received. The Department for Education today said, "Since then, the responses have been analysed and further discussions have been held with representatives of those who have to have regard to the Code, to ensure that revision secures maximum clarity for those who will be using it.... " And this is the result.

In the covering document released with the Code of Practice, the DfE sets out some of the changes that can be seen in this new version. They include:

IPSEA had called for a further consultation on the revised Code as it included guidance on the duties included at the last minute to the Bill. This is important as without it, only part of the Code of Practice would have undergone public scrutiny before being passed.

It seems the DfE has listened and has announced a short consultation on two aspects not previously included in the Code. The first aspect however, covers a number of issues while the second aspect is a case of presentation. The consultation period is short, three weeks (11 working days excluding public holidays) so that those interested can feedback.

You can find the Revised Code of Practice for download here: https://www.gov.uk/government/consultations/revision-of-the-send-code-of-practice-0-to-25-years

If you feel so moved to feedback to this new consultation, responses can be completed online at: www.education.gov.uk/consultations

The results of the consultation and the Department's response will be published on the DfE website in summer 2014.

Once the responses have been reviewed the final version will be laid before parliament for approval by affirmative resolution (i.e. both houses of parliament have to agree it)

We're going to have a good look through and give you our views after Easter. And now I am off to try to persuade Youngest to have some of his luxuriously overlong hair (known as 'Steve') trimmed in Farnham. Wish me luck!