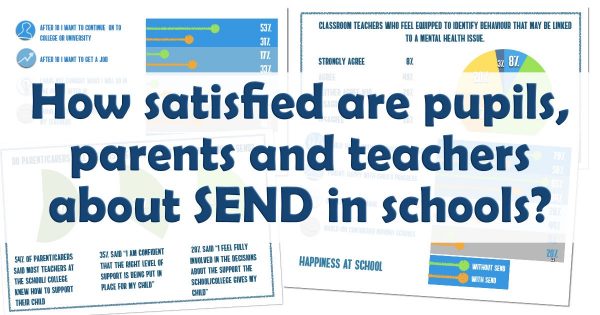 At the end of last week, a couple of surveys were published by the Department for Education. One was a survey of pupils and their respective parents/carers at state schools enticingly entitled, Omnibus survey of pupils and their parents/carers Research report Wave 1 January 2017. The pupils were state schools in years 7 to 13. It did not say (that I could find) whether any of the children were in special schools, although there were significant sections on children with SEND.

The second was the Teacher omnibus survey and a Senior Leader Booster Survey, also from 2016. This also includes some interesting information about children with SEND, so I’ve waded through the data over the weekend and dug out some interesting statistics and made them into pretty pictures for you. What I have selected are very much “snapshots” from each report and some certainly do indicate a closer look. First we’ll look at the parent/carer report.

Do parent/carers feel there is adequate support and do pupils feel that teachers are able to help them prepare for their future?

The researchers focused on two of the key principles of the SEND reforms: 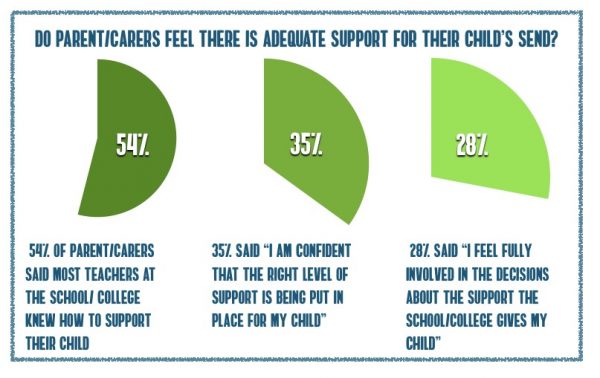 With this in mind, they put a number of statements to parents /carers of children with SEND about the support provided for their child and asked which they felt applied to them.

The researchers’ conclusion for this very low result was that, “at the very least, improved communication between the schools/colleges and parents /carers of children with SEND would be beneficial.”

But, as I think they hint, there are other questions of far greater concern such as: Is this just a lack of communication or are there very real failures of the SEND reforms at a classroom level? I believe this is much closer to the truth and I’m not blaming classroom teachers.

How can they practice what they have not been shown or informed about? Now, you would have a good point if you said that there was enough information out there for teachers to educate themselves on the SEND reforms. However, we also know how much pressure the current system of testing and reporting and large classes puts on teachers, who are only like you and me: human.

School leaders and their LAs or Academy management teams or whoever is in charge should be preparing, or providing from third parties (Nasen and CDC have lots of good material and we have our own flow charts), easy-concept information and training.

The fact that only 35% of parents felt confident that the right level of support is put in place is shocking. Why is this? Have the children’s needs not been properly assessed? (Shocker). Are the parents not confident because they do not know what is in place? Again, this points to a lack of communication and lack of involving parents, both of which are contrary to the SEND Code of Practice. Or perhaps this is because the parents do not have confidence that the expertise exists in schools to need their children’s needs (more on teachers’ views on this later)

If you are a parent who, had you been asked, would have answered the same way, please tell us in the comments below (not on Facebook comments as they will get lost) why this might be so.

One of the reasons is clear from the fact that only 28% feel involved in decisions made to support their child. The SEND reforms were supposed to put the family at the centre of the decision-making process, but if this information has got through, it seems to have largely been shunted under the rug. In some respects, from a teacher’s point of view, I can understand that involving parents is time-consuming, sometimes thankless and they may even be hard to get hold of or impossible to get into school, for all sorts of reasons. But in other respects, it’s the law, so you have to have a record of at least trying your best in various ways.

It is in the interest of every school to ask their parents of children with SEND if they feel involved, how they would like to be involved (again, you may need a variety of ways) and set up a system that can be easily implemented and managed by a class teacher. The TES website, Nasen et al must have lots of help for this. 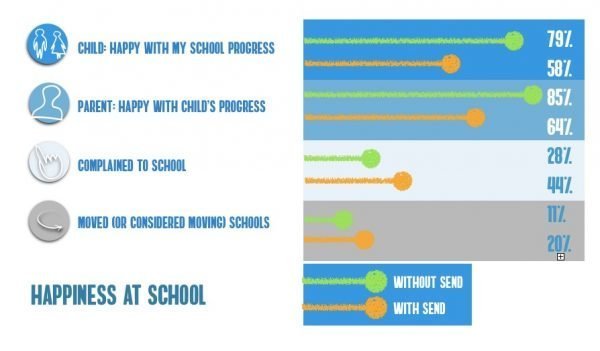 In the above infographic, you can see the clear differences between pupil happiness with their progress and parents' happiness with their child's progress when a child does or does not have SEND. Schools, it seems are generally doing well for your 'average' child. But when the child has special educational needs or a disability, both that level of satisfaction and the number who have complained to a school or even moved their child (or thought about it) are quite different. Should schools just accept this as, "Well, it's bound to happen if they've got difficulties" or should they be taking this as an indicator that the playing field is still far from level for all pupils and striving to narrow this gap. I'm sure the best are, but those that aren't need to be identified and helped to do this.

Another of the researchers’ focuses is one of the DfE’s aims to ensure SEND pupils achieve the same chances in life as other pupils.

However, the survey revealed that only just over half of pupils with SEND (54%) believed that teachers and other school staff were preparing them well for adult life once they leave school/college or training (either ‘very well’ or ‘quite well’). 66% of their parents felt the same way.

This is quite a big gap in perception, and it’s also reflected in the difference between young people without SEND and their parents. Could this perhaps reflect a generalised insecurity felt by pupils as they look ahead to the future? (Pupils without SEND: 66%) So it seems that most children in general are finding this lacking. 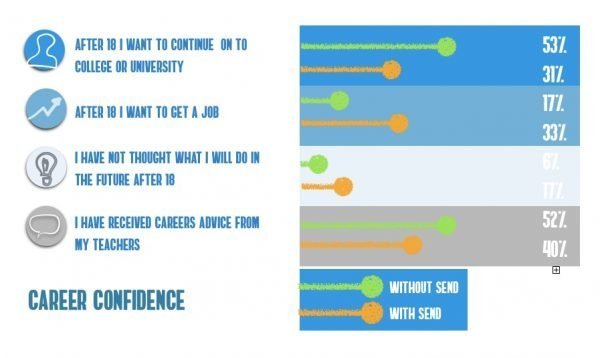 Moving to the teacher's survey, another mass of data and again, we're focusing only on that which is SEND-related. Early identification is one of the key issues in helping children get the right help in a timely manner, so learning deficits can be improved by the correct support. In the survey, class teachers (and senior leaders) were asked about how they saw their abilities to spot special educational needs in a child or young person.

Teacher training is being overhauled after the Carter Review last year and also the news last year that autism was to be a core part of Initial Teacher Training. But what of teachers who are in the classroom now, do they feel they have the training they need? 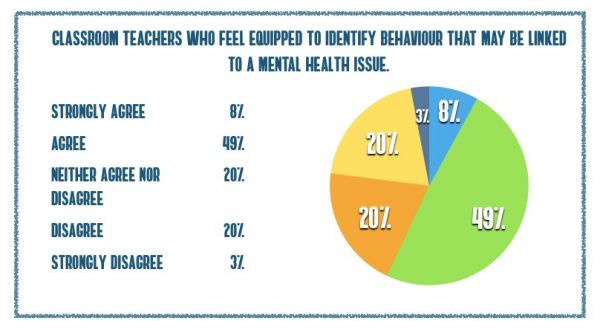 Click here to download the SNJ infographic images as one PDF
As I said at the beginning, the figures I have plucked out are just a snapshot from the two survey reports. Each report contains far more information than just SEND, so if you are interested, do download them yourselves.

Did I miss out any key data? If you look yourself and think so, add it in the comments below.