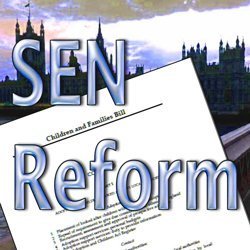 The Government is proposing to replace the current categories of School Action and School Action Plus with a new single early years and school-based SEN category.  This will mean that your school of choice will have to comply with clear guidance from the Government on the appropriate identification of pupils with SEN.  This guidance will include a clear process for identification and assessment of pupils, setting objectives for pupils, reviewing progress and securing further support.  This will be set out in the new SEN Code of Practice  - an indicative draft of the Code of Practice (COP) is already available.

Take a look at the Code Of Practice, specifically Section 5.4 looks at Identifying Needs, 5.5 looks at The Four Primary Areas of SEN and 5.6 covers Additional SEN support in settings.

One paragraph in 5.6 leaps out to me as a parent :

“It is the responsibility of educational settings in consultation with parents, and, where appropriate, the young person, to decide whether a child or young person requires Additional SEN Support. They must ensure that children and young people who receive Additional SEN Support have an identified SEN and that their progress has not been hampered by weak teaching or poor attendance”

The Ofsted review of SEN (2010) found that nearly one fifth of the schools visited suggested that they provided additional SEN support when, in other schools, such provision was regarded as the norm.

Therein lies a huge part of the problem.  We all know there are schools where the staff will do all they absolutely can to ensure your child reaches their full potential and then there are schools which prefer to lay the lack of development at you and your child’s feet.  I am very fortunate in that all three of my children are now in schools that take the former stance and not the latter.  However, I do personally know of schools where there is not a chance in a million that they would ever admit they were perhaps the problem.

Ofsted reports do not always reflect the true representation of SEN in schools – we all know of parents asked to keep their child home for the day Ofsted are arriving or their Ofsted questionnaire somehow not making it home.  Would these schools be holding up their hands to say “oh sorry, some of our teaching is a bit weak”.

The proposed removal of School Action and School Action Plus is part of the Children and Families Bill.  After considering the Ofsted review of SEN (2012) and the Lamb Inquiry (2009), the Government believe the current system emphasises labelling children’s need according to the support  needed rather than the outcomes sought for the child and can lead to children being unnecessarily labelled as having SEN.  It also found that 'there is a risk that the use of the SEN label itself leads to lower expectations or less vigorous intervention.

The Lamb Inquiry (20091) reported that SEN can sometimes be ‘unhelpfully collated’ with falling behind, and this may have contributed to the growing number of pupils at School Action and Action Plus.   Did you know that at the end of Key Stage 2, August-born pupils are 60 per cent more likely to be identified as having SEN than September-born pupils?

The Government believe that removing the need for a label of SEN, will challenge schools to improve the quality of teaching and learning for all pupils but what do you think?

Once again, we come back to the culture change needed.  The new Children and Families Bill and indicative draft Code of Practice do not totally reflect the aspirational Green Paper that so excited so many of us.  However, it is still a draft and as a mum, my main concern as I read through them is this tells us what the goal is but not we actually get here?”

What about the very basic communication to families and practitioner of the proposed changes.  If we can't get that right, how do we propose to get all of the changes right?  Have you heard about the changes in your LA?  Take our quick survey and let us know - we will be sharing the results with the Department for Education.