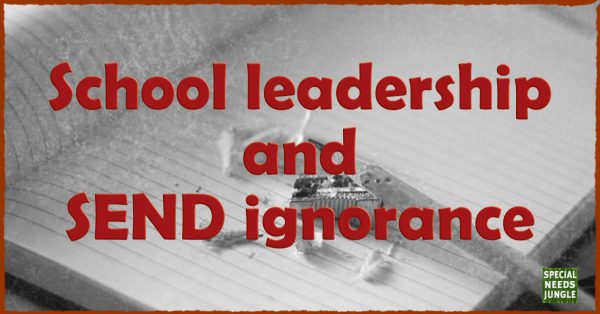 In an earlier SNJ blog in 2015 I wrote about the critical role of the SENCO in schools. The SEN Reforms had called on a more strategic role for SENCOs operating as leaders in schools and my key questions on leadership of SEND focused on that developing role.

Two years later, having spoken to numerous SENCOs and visited many schools across England, my thinking around leadership has moved on. In a previous article1 for Schools Week in July 2016 I wrote ‘We talk about every teacher being a teacher of SEN but this won’t happen until every leader is a leader of SEN’. That sentiment reflected a growing experience that across the country SENCOs are doing their level best to support the reforms and improve the experiences and outcomes for children with SEN but all too often they are coming up against barriers from within their own schools.

There are many examples of this. I know of an exclusion (there are still far too many exclusions of children with SEND in this country) in a mainstream secondary school of a child in an autism provision who was excluded for lack of personal organisation and for overacting to situations that he regarded as unfair; i.e. because of his autism! I know examples where SEN funding is not being appropriately ring-fenced and used and where the SENCO is having little or no say in how the SEN funding is deployed.

Conversely, I know of situations where mixed ability teaching is the norm, where there is true inclusion and where the experiences of children with SEND are at least as good as that of any child in the school.

In every one of these situations it is the headteacher or principal’s attitude and commitment to SEN that has really made the biggest impact. They have fully supported an inclusive philosophy and enabled the SENCO to be effective in their role.

One of the principle reasons for the Children and Families Act 2014 and the introduction of the so-called SEND Reforms was that parents far too often had to battle to get the support their child with SEN and/or a disability needed. We all know that parents are still battling but there are good people out there in the system fighting for a better deal; those people are known as SENCOs. When they work in a school with an inclusive philosophy they can make such a difference.

The issue of ignorance and its impact on culture

At many of my presentations I have asked this question: ‘If you were to get every one of the c.23,000 Headteachers in this country into this room and ask them to name the four broad areas of need in the SEN Code of Practice what’s your estimate of the percentage who would know?’ The estimates range from 10% to 40% but never more than that and usually much closer to the 10-20% mark.

How can this possibly be the case? The reason in my view is ignorance; in some cases possibly deliberate ignorance but in the main just plain ignorance. Remembering that ignorance is a lack of awareness, knowledge and/or information it gives me hope that we can continue to do something about it.

So many of them know the percentage of SEN children in their school but their knowledge goes no deeper. I’ve been on a mission to combat that lack of knowledge so that more of these good people can become effective leaders of SEN and understand the needs of the children they serve more effectively. With this knowledge they can become the proponents of an inclusive philosophy.

Too often ignorant leaders talk about ‘children with SEND’ as though they are a homogenous group without going any deeper and considering the true impact of the different types of special educational need however, the four broad areas of need are so important because they give a useful insight and first step along the journey to greater understanding.

We need more leaders out there who are prepared to listen and learn so that they can use their leadership skills to impact on the outcomes for these children. I sometimes remind people that although the SEN Code of Practice is 292 pages long the section on schools is only 19 pages. If every leader in this country read that section it might begin to make a difference.

The issue of advocacy

As I’ve said, the reforms were introduced partly as a response to the reports of so many parents that they have ‘to battle’ for the provision which their child with SEN and/or a disability needs.

Firstly, they shouldn’t have to battle, secondly if they do then we should at least join them and work with and for them. This policy of support is at the heart of advocacy. It’s a commitment to change things for the better, to deal with injustice, to subsume what’s politically correct beneath what is fundamentally right. At the heart of that commitment is service; a recognition that professionals are there to serve the public.

When I was a headteacher in special schools, I often used to think that the system in special schools changed all the time to benefit the child. I rather think that in many mainstream schools the child has to fit the system.  In all cases there’s a balance to be had between requiring a child to fit any system and allowing the system to be influenced by them - we sometimes accept that when we use the eduspeak ‘pupil voice’. We all have to fit systems and follow societal rules however, for many children that is a big challenge and it demands understanding and above all flexibility on our part.

In the 1980s a movement took hold called ‘personalisation’. The school system needs to be able to personalise, to bend with the child and respond to their changing needs. Too often for children with SEND, schools do not achieve the right balance between establishing and promoting a system and responding to personal need through flexibility. With a spirit of advocacy, understanding at a personal level and a service commitment the correct balance is more likely to be achieved and the battles which parents fight less widespread.

The issue of positivity and what can be done

My approach therefore to the issues outlined above is:

I believe things can change and that positivity and opportunity are the two key ingredients.