Sharon Paley is based in the UK at the British Institute of Learning Disability (BILD). She is currently undertaking a professional study tour of Australia and has received a Florence Nightingale Foundation travel scholarship.

Sharon is an eminent author and specialist in positive behaviours, as well as being a bit of a rock chick on the side. With years of experience and research behind her, she is one of the country's leading experts in seclusion rooms, and is called upon by international courts to advise when their use goes tragically and horribly wrong.

I'm using my Friday column to bring you Sharon's written summary of her findings for Special Needs Jungle, aimed at parents, carers and teachers, to ensure that illegal practices come to an end once and for all. 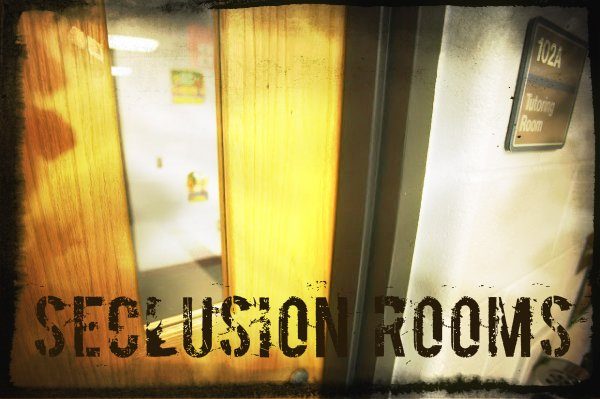 I first presented a conference paper on the use of ‘time out rooms' in 2004, raising my concern, that there appeared to be the use of rooms in UK schools and care services in response to managing behaviour. In the professional role I was undertaking at that time I had become aware of seclusion being used within school settings.

In 2007 I presented a conference paper to a shocked professional audience; the presentation included a short video clip of a child in an American school who had been locked into a ‘time out room’.

This video showed Isabel Loffler an eight year old girl with autism as she is videotaped for more than three hours confined in the room, she has also wet herself. It was widely reported in the media that she was put into the room for refusing to complete a reading exercise, the video shows that she bangs her forehead with her fist and tries to climb the walls. At several points in the film, Isabel drops to the floor and stares at the teachers watching her through the window.

The use of time out rooms within educational settings for children and young people has been in the headlines once more in the UK following  a recent report which was  published by Estyn (Her Majesty's Inspectorate for Education and Training in Wales) that highlights continuing concerns with regard to safeguarding issues at Pembrokeshire Council, these concerns arose from the report published in August last year which discussed the inappropriate use of so called ‘time out rooms’. The rooms were in schools and pupil referral units.

In June 2011 another case which centered on the use of so called ‘time out rooms’ hit the headlines when the  Court of Protection ruled that an 18-year-old man with autism and severe learning disabilities who was regularly placed in a padded seclusion room more than six times a day was unlawfully deprived of his liberty.

In April 2012 Lord Justice Ryder took the unusual step of lifting certain reporting restrictions applied to cases before the court of protection by naming some of the parties involved in this case. The young man was at a residential school which was reported by the media to charge fees of up to 250,000 GBP per annum, the school was run by SCOPE, a national charity which has campaigned for the rights of people with disability over many years.

On reading the sensational reports about the use of time out rooms in the media most people, especially parents, have the immediate reaction of knowing that the practice of locking a child in a room is at the very least immoral. However when a parent is faced with a professional who is having difficulty in responding appropriately to the behaviour of their child that presents a challenge, it may be that they have agreed to their son or daughter being placed in “time out” as they feel powerless to do otherwise. It may be also possible that they do not fully appreciate what the professionals mean when they suggest ‘time out’ ‘ quiet time’ or ‘chill out time’.

It can be presented in a such a sanitized way which gives parents confidence that the professionals know what they are doing. It is also true that for many parents there is a feeling that if they do not agree to a strategy offered to then that perhaps their son or daughter may be excluded from school.

It is important to understand what time out actually is. It is a term used to describe a very specific behavioural technique; you may be familiar with Super Nannies version of this? To explain it simply time-out is

“time spent away from reinforcement, usually for a specified period of time”.

In non-exclusionary time-out the individual is not physically removed from the setting but they do not receive positive reinforcement from other people for a period of time or at least until they desist from exhibiting the behaviour of concern to other people (which may be challenging). Positive reinforcement is something which the person finds to be pleasant; even being ‘told off’ may be a pleasant experience for some children.

In exclusionary time out the individual is at least partially removed from the (educational) environment. Time out does not have to take place in a certain room with special equipment and the child isn’t usually left alone. For time out to be effective as a behaviour change strategy the individual must have a level of understanding which enables them to make the link between their behaviour and the response of time out.

There should also be some way that the young person can reflect on their behaviour and communicate this to someone (in their own way, this may be with symbols or signing) so that they are able to return to the activity/ environment they have left as soon as possible. As a strategy time out has limited use especially with children and young people who have autism or intellectual disability as they often lack the ability to make the connection between time out and any behaviour they may have been exhibiting.

On a personal note I am also concerned that anyone might have an honest belief that a young child or child who has an intellectual or cognitive disability might reasonably be expected to gain control over their behaviour while effectively being isolated from other people and important social contacts.

For a child to learn and understand how to manage their emotions and any behaviour which might be seen as ‘challenging’ by other people they are likely to need support guidance and explanation. If a child is isolated from others whenever they exhibit a behaviour which is perceived as ‘challenging’ by others it’s unlikely they will be able to reflect on why they have been left alone, or experience any guidance relating to their behaviour, its actually more likely this is a frightening experience and for any child, for a child with a disability it would possibly be more frightening.

When we consider this carefully it is easy to understand though why some people may almost drift into using a practice when  you are faced with a child whose behaviour appears to be out of control and risky, you notice that when the child is allowed to spend time alone they calm quickly.

A potential solution may appear to be a room which the child can use in order to ‘self sooth’, at first being accompanied by staff when in the room. Over time this practice becomes embedded, and it becomes the normal response to the child’s behaviour.

Arguably it is easier to mange the child and the behaviour  by putting them in a room rather than try to figure out what is making them behave this way which would be a more proactive and positive response.It might also be that it feels less risky than managing the behaviour in a more direct manner.

In order to free up a member of staff from guarding a door a catch is put on the exterior of the door to the room. The child is now placed in the room alone with the catch down; in most circumstances if this is a planned response it is likely to be unlawful. It is probable that this would constitute unlawful imprisonment and it might also be considered a breach of that child’s human rights.

If the answer is yes to most of the above it is likely that you are using a time out strategy.

If the answer is yes to the above questions  the practice is more likely to be seclusion, and may be illegal except in specific circumstances described in legislation such as The Mental Health Act (1983)

It is important to understand what is actually meant when professionals suggest options such as ‘time out’, quiet space or safe space. The questions above may act as a quick guide.

If a child is put into any room or area from which their free exit is prevented this is a breach of their human rights, it may constitute unlawful imprisonment and in any event it is unacceptable practice.

There is limited evidence that time out strategies, implemented as part of an overall behaviour  response strategy will have any positive impact on children or their behaviour in the long term, especially when such strategies are applied without any positive behaviour support plan. Indeed it is likely that any such isolation may cause distress and even traumatise the child.

In November 2004 a 13 year old child, called Jonathan King hanged himself while in a time out room at his school in Georgia, USA. While this is an extreme and incredibly sad example of what can happen when time out is implemented it is too simplistic to argue that such an event could never occur in the UK.

The two examples cited in the opening of this  article are evidence that the practice is occurring in schools in the UK. It is difficult to say how widespread the practice is but it is probable that the two cases discussed at the outset of this piece are not isolated examples.

In my professional experience when I have come across ‘time out’ strategies in schools and other environments they have often been adopted by well-meaning staff who have worked with the parents and carers to agree a way forward.

The intent is often well meaning however it is my professional opinion that the use of rooms to isolate children is misguided, ill-informed, not based in any evidenced-based practice and unlikely to yield any positive outcomes. It is also potentially dangerous.

Illegal Use of Seclusion room examples