Just as we agreed to go down to two posts a week over summer (with a week off in August), the Department for Education dropped the 2015 SEN figures. Sigh.

So, we've made an infographic to make it easier to see and plucked out a few headlines for you. You can see the figures and narrative in total at the gov.uk site This only has the headlines but the report makes for unsettling reading.

Figures for SEN as a whole have been dropping since 2010 and the statistics narrative suggests this might be as a result of the Ofsted Special Educational Needs and Disability review, which claimed that a quarter of all children identified with SEN, and half of the children at School Action, did not actually have SEN. Teachers came under pressure to remove children from the SEN register who may just have been recent immigrants with poor or no English or who perhaps were just, sad to say, naturally low attainers.

However, in 2015, that downwards trend shows a big drop of 2.5% on last year's figures. Of course this could be fantastic news - the SEN reforms have been a mahoosive success in just a year! Yay!

However, to me this is perplexing, because statements/EHCPs have remained stable in percentage terms and have increased in actual numbers. SEN Minister, Ed Timpson assured parents that no child would lose their statutory SEN support simply as a result of the transfer to the new SEN system. But what about the lower levels? Hmmm.

The statistics researchers suggest that the implementation of the SEND reforms in September 2015 may have, "Led to more accurate identification which has led to the steep decline in the number with SEN in January 2015."  Not those with statements/EHCPs; it's the children on lower levels of School Action/School Action+ who have amazingly and spontaneously recovered from their special educational needs and apparently did not need to be transferred to SEN Support.

This drop was highest among 12 year olds, with a fall of 4.1% compared to a fall of 2.7% for all pupils. Well well, that's the age that they would be transferring to Secondary school....so what's happening? Are secondary schools deciding that Primary school assessments were wrong? Is information not being effectively passed on? Or could it be that the change to the new system was a convenient excuse to tell parents that their child no longer met criteria. Or say nothing and just not register them at all? I think this should be looked at more closely and not just be shrugged off or even celebrated as a success of lowering SEN numbers. Don't you?

You may recall that one of the four areas of need,  ‘Behaviour, Emotional and Social Difficulties (BESD)’ was ditched and a new area of ‘Social,
Emotional and Mental Health (SEMH)’ was introduced, effectively saying there's no such thing as a naughty child. The intention of the Dfe was for teachers to understand that there is usually a reason for bad behaviour, find it and offer appropriate help. It's to be hoped that these children who were deemed "naughty" and stuck on the register as BESD haven't just been cut loose because behaviour isn't a criteria anymore.

Talking of proper assessment of need, in 2015 pupils who were formerly School Action but have transferred to SEN support are now required to be allocated a 'type of need'. And so, a new code called, ‘SEN support but no specialist assessment of type of need’  has quietly been introduced. This is something else I find perplexing and when I put a call out on Twitter for a definition, others do too -click the "view more" link to to see the replies.

According to the new SEND Code of Practice,6.45, when a child is thought to have SEN their needs should be analysed and if relevant an early assessment by external experts is advised. So there should be NO pupils whose needs have not been identified. It's like saying it's a 'CBA (Can't be arsed) to find out,' category which seems to be the complete opposite of the ethos that the DfE want to see. However, later, someone Tweeted that it could be a way to make sure support isn't delayed. Though without assessment, how do they know what provision is needed?

Another stark finding is for black pupils, Gypsy/Roma & Travellers of Irish heritage who have seen the largest drop in rates of SEN support, falling by 4% in a year.  The smaller groups of Travellers of Irish heritage saw a MASSIVE fall of 9.1% percentage points and Gypsy / Roma fell by 6.4% percentage points. What's going on here? Could it possibly be that they are just being written off under the new system?

I'm pretty sure this isn't the DfE's intention, but because the SEND Code of Practice is short on spelling out specifics, schools may have taken the road of least resistance which is, of course, the cheapest one. I stress this is just a guess - I have no evidence for why and the report doesn't offer any theories either. Maybe the DfE should look at this very quickly.

I'll leave you with the infographic I made which you are welcome to download or add to your own blog or Facebook. A pdf of it can be downloaded here. There are many more stats to see - I'm no statistician, so please do add your own analysis in the comments! 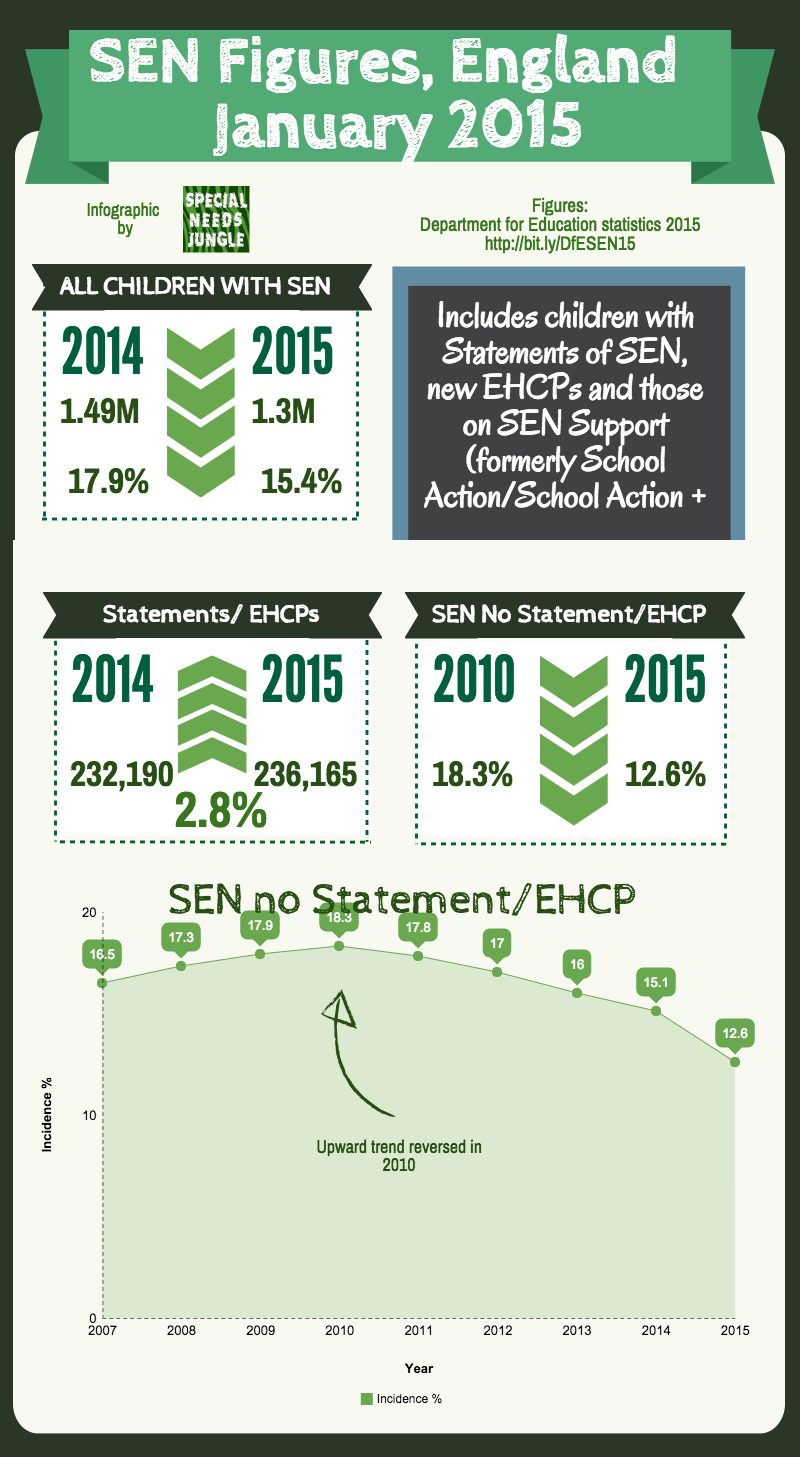