You may have heard that in the new SEN system, parents can ask for support through an Education, Health and Care Assessment by an Independent Supporter.

Families can ask for help when they apply for an assessment, if they feel they need it and, crucially, subject to availability.  The government has set aside £30 million until 2016 to recruit, train and implement 12 independent supporters per area who are supposed to take on a "key working approach"

The charity, Council for Disabled Children which is operating as the government's strategic partner on the SEN reforms, has also been appointed by the DfE to be the developer of this new role (it's claimed there was a tendering process but no one I've asked has been able to point to who else bid or even knew about it). The CDC has so far awarded contracts to Sense to develop the legal training package required for Independent Support training, and NTDi to lead on the evaluation of the Independent Support programme. Sense will be working with highly experienced SEN lawyer, Steve Broach, Barrister at Doughty Street Chambers and Irwin Mitchell Solicitors to deliver the training.

At the end of this post I have a question for you about your views of what you would want to see in an Independent Supporter - and what you wouldn't, so read on and then pitch in. 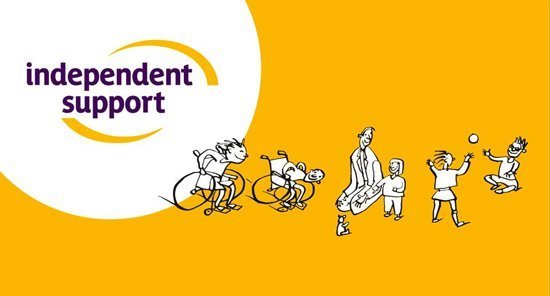 The CDC has also run a process to contract a number of independent voluntary, community and private organisations with " local knowledge and expertise" to deliver an Independent Support service in each local authority area from 1 September 2014. Some may be larger services that offer support across several local authority areas.

The CDC will be announcing the recipients of the Independent Support - Voluntary and Community sector funding on Tuesday 22nd of July here. {I will endeavour to update this post after the announcement}

Parent Partnerships have also been given cash to offer Independent Support services. This seems sensible because they are already operating in an advice and often, a support role already, but they will also have to develop the capacity, access training to be offered by Early Support and supervise their IS workers (not to mention recruit them in the first place).

This is the presentation from CDC to Parent Partnerships about what is on offer and what is expected from those PPS' appointed.

Here is the text about Independent Supporters from the (still draft) Code of Practice:

2.20 Families may receive help from an independent supporter, provided by private voluntary and community sector organisations, who is independent of the local authority. Independent supporters will be recruited locally and receive accredited training, including legal training, to help any family going through an EHC needs assessment and the process of developing an EHC plan.

2.21 Local authorities should adopt a key working approach, which provides children, young people and parents with a single point of contact to help ensure the holistic provision and co-ordination of services and support.

Key working may be provided by statutory services in health, social care and education, or by the voluntary, community, private or independent sectors. Key working can be offered to any family where children and young people have SEN or disabilities, for example if they receive SEN support in schools or nurseries or in preparing for adulthood.

Approaches will vary locally, but the main functions of key working support should include some or all of the following:

I think it's a little unlikely any will be up and running by September 1st, considering the summer holidays are upon us, but who knows?

The Independent Supporter role is fundamentally a very good idea but it is being emphasised that not every parent will get one, although I was told by the DfE in this post a while ago which is almost identical to the above:

"Require" and and "request" are quite different as the first implies a need whereas the the second is more of a want, but "require" is what appears in the actual CoP so we will have to go with that.

In fact, I can't imagine that any family will not "require" help through this new, somewhat confusing and certainly complicated system. Really, who wants to navigate it alone? Not me! I would love to be able to offer SNJ independent supporters - a country-wide small army of savvy, sassy, supportive and strong supporters who can deal with every situation calmly and with a keen knowledge of the laws, facts and potential excuses they may come up against. Alas, we are not that big a team to even have dared to imagine bidding 🙁 . But they sure would be awesome, wouldn't they? I know a few mums I'd have on my team straight away! One day, maybe!

Dreaming aside, the question that springs to my mind is who decides, when there are only 12 ISs per area whatever the size of the LA, which families will have the benefit of the help provided by an Independent Supporter and which will miss out, even if they "require" one? What if a family misses out purely because there aren't enough to go round and then that family is turned down on any aspect of their child's assessment - will this be grounds for appeal? Of course, having an IS is not a right and the CoP says "as many families as possible" which is a complete get-out clause.

It may be that 'LA1' is small and has enough well-trained Independent Supporters to help every family who applies for a Statutory Assessment for their child. Hurrah! But 'LA2', a large, sprawling, county based local authority has not even been able to recruit the basic 12 - maybe no one has bid for the local contract even, maybe their Parent Partnership just doesn't have the capacity either. What then? How is that fair to the parents and young people living in LA2? And it isn't even a legal right to have one so you can't appeal - fair has nothing to do with the law.

Methinks some urgent thinking needs to be done here - or perhaps it has been and no one has disseminated that information yet. I would be happy to be corrected on anything we say on this site that isn't completely accurate because I know that parents (and many professionals) depend on us to give them the right information in a readable, understandable format.

And, presumably, along with contracts, there will be a work assessment, payment, monitoring and ongoing skills training as well as training about liaising with the different services. And what happens if it turns out you don't get on with your IS or you don't feel they're doing a good job? There needs to be minimum standards and a complaints procedure and I hope all these things are under construction, so to speak.

But over to you - an Independent Supporter will work closely with your family. If there was an "Independent Supporter Code of Conduct", what do you think should be on it? Let's make our own parent-sourced plan - leave your thoughts in the comments and I'll gather them up and make another post about it.