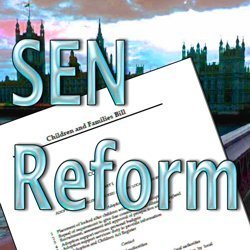 It's been a bumper day of announcements and happenings surrounding SEN reform.

First of all, came the publication of a list of local authority groups who have been appointed "pathfinder champions" as they plan to implement the reform to special needs provision in England.

At the same time, a joint report on progress across the pathfinder programme, was published, including headline results from a survey of 65 families with completed education health and care plans. The report is available for download from the associated resources section of this page.

But, quite unexpectedly, the DfE announced a much called for duty on clinical commissioning groups (GPs who plan local health services) to secure any health provision required in the upcoming education, health and care plans for children and young adults up to 25.

Hard on the heels came the House of Commons Children's & Families Bill committee meeting with a stellar cast of speakers that anyone knowledgeable about the SEN world will be familiar with.

Wow! This is too much information for one post, so Debs and I have prepared TWO posts, one about the new duty and one about the first two points.

Read the "New Duty on Health" post here. (The link will be repeated at the end of this post)

The progress report and headline survey results is a largely upbeat document about, surprise surprise, progress made. It does seem that, as you would expect, the smaller, more compact authorities are further along in some areas where reorganising services is a more straightforward.

The report, while interesting and informative, does rather over-focus on the positive aspects of various pathfinders and while this is to be expected, highlighting particular achievements, it would be useful to see what isn't working quite so well and where some of the larger challenges such as the scale of work needed to provide the Local Offer and its necessary IT framework mentioned.

It was, however, gratifying that they mention the parent-carer involvement of the SE7 because, certainly in Surrey and Kent, we do feel this is of particular note. You can read the document in full here

In fact during the House of Commons Children's & families Bill committee hearing in Westminster today, Christine Lenehan of the Council for Disabled Children noted that, as she visited the various pathfinders, she found that some of most effective ones are the not those with the most plans but those that have concentrated on building climate for culture change to happen.

This, Mrs Lenehan emphasised, will be essential otherwise people will just be focusing on scaling up the pathfinders rather than looking at how you make an entire system change and so that it helps individuals in the system.

Mrs Lenehan said that true success was working with empowered parents, empowered young people and being able to bring creativity to some systems that have struggled to be creative, because there are far too many professionals who do what they do because it's the way they have always done things. She noted that in her experience some professionals happily seemed to admit that their jobs would be far easier without the interference of parents!

Brian Lamb, the author of The Lamb Inquiry in 2009 and who spearheads Achievement for All said during the select committee that, "Essentially the more you involve parents both at school level and the strategic level, the better the outcomes you get."

He welcomed the concept of the Local Offer of services for SEN/D in terms of what the government has painted as the picture around it, rather than the language that now exists in the actual bill.

From April 2013, the ‘pathfinder champions’ will begin to support councils who local authorities across England who are not involved in the pathfinder as they prepare to roll out the reforms.

The DfE says that the champions were chosen based on a mix of skills, experience and regional factors. Each region will have its own pathfinder champion but in some areas, the role will be carried out by a partnership of pathfinder local authority areas.

The SE7 consortium consists of Surrey, Kent, West Sussex, East Sussex, Hampshire, Medway and Brighton & Hove. Obviously with Surrey and Kent being our own areas, we are both very pleased that the SE7 has been designated.

The champions cover a broad range of authority types. In some city-based authorities, it is a very different system where, for example there may only be one new health Clinical Commissioning Group (CCG) whereas for example in Surrey there are 5.5 (half of the .5 is in Hampshire) and so coordinating provision will be much more complicated. In addition, in Surrey the SEN department is divided into are four geographic sub-quadrants as it is such a big county and I'm sure this isn't the only LA that will face such complications.

The work of the pathfinder champions will be informed by a set of ‘principles of emerging practice’. There will be an updated version of this document on the pathfinder website from the end of March. Translated, 'principles of emerging practice' are ways that those involved with the reforms have found to be the most effective and practical steps to implement the reforms.

Two further SQW evaluation reports will be published at the end of May and September. The first of these will include further progress made, feedback from 10 case study areas and a final update about the SEN Direct Payments Pilot Programme.

Not: As we publish, the committee is still going on, but for our purposes, most of what we needed to hear has been said. If anything else interesting is said after 5pm, we'll update.