Last week I wrote about the problems facing parents of children in mainstream school whose special needs have been persistently overlooked. While the troubled roll-out of Education, Health & Care Plans has been extensively covered by Special Needs Jungle, little has been published anywhere about the outcomes for children and young people who have special needs but who do not have an EHCP. In other words, those who are supposed to receive “SEN Support” in their school or college. 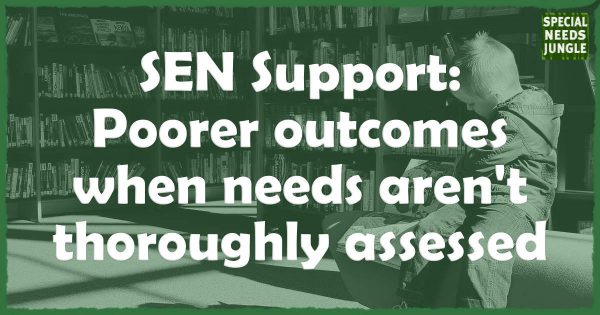 The SEND Code of Practice describes a special need in the same terms, whether the child or young person receives SEN Support or an EHCP:

6.15 A pupil has SEN where their learning difficulty or disability calls for special educational provision, namely provision different from or additional to that normally available to pupils of the same age.

Generally, the progress made by these pupils follows one or more of these patterns (s6.17):

But the reasons for placing a child or young person on SEN Support may also include (s6.18):

progress in areas other than attainment – for instance where a pupil needs to make additional progress with wider development or social needs in order to make a successful transition to adult life.

The next couple of weeks will provide real insights into the experience of children and young people entitled to SEN Support. On Thursday (22 June) the Department for Education will publish the school workforce data, allowing us to see whether the number of support staff fell last year. The following Thursday (29th June) they will publish the annual report on numbers of pupils with special needs.

The number recorded as being on SEN Support has been falling throughout this decade, while the number with a Statement/EHCP has been very stable. We can argue about the drop in SEN Support numbers – is it a sign of better practice in basic school provision or is it widespread denial of needs? Do schools accurately identify needs these days? As my piece last week showed, there is often inadequate assessment, monitoring and planning for them.

Compare the way in which children’s special needs are described (their “Primary Need”) between those on SEN Support and those with an Education, Health & Care Plan. The most common Primary Need at SEN Support is ‘Moderate Learning Difficulties’, a label which tells us (and teachers) nothing. Among those with an EHCP, however, this label drops to third most common, overtaken by Autism (the most common Primary Need among EHCPs) and Speech, Language & Communication Needs.

There is a simple explanation: when children labelled with Moderate Learning Difficulties at SEN Support are fully assessed for an EHCP, autism or language needs are often identified. This means that the intervention they receive while on SEN Support is frequently inappropriate or inadequate and parents realise the importance of getting a multi-disciplinary assessment.

What else do we know about outcomes for children and young people on SEN Support? The largest attainment gap in Key Stage 2 (Year 6) national assessment is between pupils with SEN and those without. Only 14% of pupils with SEN reach the expected standard in reading, writing and mathematics, compared with 62% of those who do not have special needs. So children are more than four times as likely to reach national standards if they don’t have special needs.

That suggests that “Quality First Teaching” and targeted intervention need to improve an awful lot before children with special needs will be able to leave primary school with anything like the knowledge and skills of their peers. That data puts pupils on SEN Support and EHCP together, but we know that the vast majority of pupils with SEN entered for the national assessments are on SEN Support, not EHCP. The gap between these children and their peers is more than twice the gap between those who receive Free School Meals (FSM) and those who don’t. Socio-economic disadvantage is a factor in the inequalities of school life, but SEND is a much bigger factor.

We can also look at exclusions: pupils with SEND account for just over half of all permanent and fixed-term exclusions. Between SEN Support and EHCP, those on SEN Support have the highest exclusion rates and are over seven times more likely to be permanently excluded than their peers with no SEND.

No EHCP can have long term effects

How about their destinations after GCSEs? The latest data available shows pupils on SEN Support are less likely to continue in education (83%) compared with those who have a Statement (88%) and those with no SEND (92%). But pupils with special needs who do not have a Statement/EHCP are almost three times as likely to drop out of their post-16 destination as those with no special needs. They are more likely to give up on education and go into employment than others of their age.

We need to do so much more. I have written to the Department for Education about it and I recognise that they have a number of new initiatives to address this. I look forward to reading the outcomes of the Whole-School SEND consortium which has now trained 300 people to review the quality of SEND support in schools.

But as I continue to help parents battling with a support system that refuses to be pinned down, that has no precise criteria, that has little legal status, that is anything the school wants it to be or nothing at all, I am seriously worried about children. I train teachers to support SEND better; last Friday a group of them worked with me from 1.30pm till 6pm in London and were still queueing up to ask questions. But they need a system that works: a system that is clearly-defined, that is consistent across schools and Trusts, that is transparent and accountable and that guarantees a trained SEND Co-ordinator will take responsibility for each child’s needs and for each parent’s concern AND WILL NOT LET THEM DOWN.

On Thursday, we will have Barney's Key Points for SEN Support in Schools. It will be a post you won't want to miss and one you will definitely want to share!