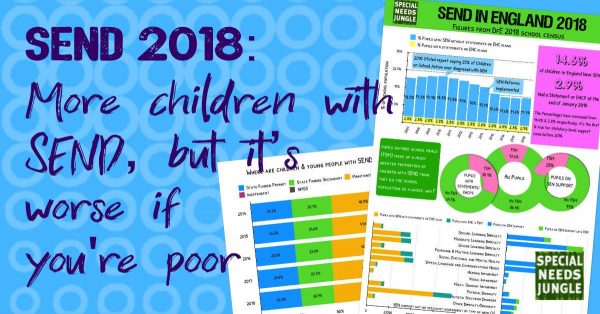 It’s the end of July so it must be time for the annual SEND figures – the government statistics that show how many children and young people have some kind of registered SEND.

The scores on the doors

State Special Schools: The percentage of pupils with a statement or EHC plan attending state-funded special schools has seen a year on year increase since January 2010 from 38.2% to 44.2% in January 2018.

State primary: The percentage of pupils with SEN without statements or EHC plans attending state-funded primary schools has also increased between January 2010 and January 2018, from 51.4% to 57.1%.

State Secondary: Meanwhile, the percentage of pupils with SEN without statements or EHC plans attending state-funded secondary schools has declined over the same period, from 43.6% in January 2010 to 33.9% in January 2018. 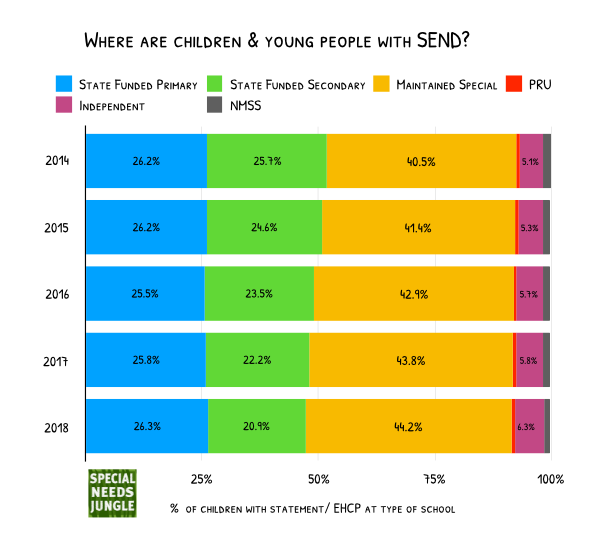 Academies may be out from under local authority control but they must still abide by the law when it comes to children with SEND. Many parents have experienced difficulties in finding places at academies for their disabled children and

These figures show that the placement of pupils with SEN is broadly similar when comparing primary and secondary academies to all state-funded primary or secondary schools.

“SEN support is most prevalent among 10 year-olds (14.6% of pupils). This is consistent with previous years. This reduces to 12.5% for 11 year-olds and continues to decline as age increases. As age increases, the percentage of pupils with Statements or EHC plans also increases, up to age 15, where 3.8% of pupils have a statement or EHC plan." School Census text

This indicates that the needs of children who had been on SEN support at primary school become more apparent as they go into Secondary, or, parents see that their children who were just about coping in primary find secondary school a significant challenge and they seek the support of an EHCP. It’s often the age when parents decide that mainstream isn’t right for their child as they seek specialist provision. I know from my children’s former independent specialist school, that there is a large influx in Year 7.

What does Matt Keer think?

I'm no statistician, but I know a man who eats numbers for breakfast.. our own columnist, Matt Keer. I asked him for his take on the figures that I haven't talked about:

"On the face of things, these statistics look remarkably unremarkable. Compared to last year, there aren't many big shifts, just slight nudges upward and downward here and there.
"Look a bit closer though, and there are some big changes going on at the SEND front line. For example, the number of SEND units and resource bases in mainstream schools has dropped, and dropped fast - by nearly 10% in the space of 12 months. That's 132 units and 200 resource bases that were here last year, and aren't here any more.
"It's not clear whether these units and bases have closed because their mainstream schools didn't want them any more, or because schools and LAs found them harder to fill as families push for special school places. The former is more likely.  But either way, the fall in units and base numbers will add to the hefty challenges that mainstream inclusion is facing right now.
"This is a trend that LAs are trying to counter - they've recently received the first batch of money from the Department for Education's £253m SEND capital grant, and most of the spending plans I've looked at involve expanding SEND unit or resource base capacity in mainstream, or amalgamating it into bigger multi-SEND units located in a smaller number schools.
"So more money is being pumped into SEND units and bases - the question is, do schools, parents, and pupils still want this model? And if they don't, where do pupils end up?"

For me, the most worrying trend is nothing new, but does not seem to be getting any better. Pupils on Free School Meals – in other words, pupils from low-income families – represent a disproportionate percentage of children with SEND.

Why is it that although children receiving FSM make up only 13.6% of the school population, and yet they make up 24.5% of children on SEN support and 30.9% of children with statutory plans? That is a HUGE percentage differential.

As with that we reported on last week, pupils who qualify for free school meals were also more likely to have been excluded – presumably because they are finding school difficult, perhaps they have less support at home or maybe their families are having difficulty putting food on the table. This does not come from nowhere – in this time of austerity, those on benefits are suffering – not least from the mess that is the roll out of Universal credit, as well as punitive sanctions for sometimes the most Kafkaesque reasons. The effect rolls down to the children - it's shameful.

So why are schools so ready to exclude children who are already the most deprived in the country? Is this another form of discrimination? You might ask if the larger percentage of those on SEN Support who have Free School Meals is just a knee-jerk response from the school to children who are not thriving. But the figure is echoed (though the gap isn’t as much) by those with EHCPs – 31% FSM opposed to 24.5%. These children have not just been stuck on the SEN register for lack of anything else – they’ve been through an assessment process and many parents will know that ain’t easy - so why is SEND more prevalent, proportionally with these children and what is being done about it?

On top of this, it should come as no surprise that pupils claiming FSM were more likely than other children with SEND to have Social, Emotional and Mental Health as their primary type of need with 31.3% of pupils with SEN support and 41.2% of pupils with a statement or EHC plan. Put together than that’s a pretty shocking statistic.

Why is this happening? Is it because children in low-income families are more likely to have parents with SEND themselves? Is it because their families can’t afford proper nourishment or have difficult home lives (though the latter is far from restricted to low-income) Are we just content to let them continue to be part of some kind of “underclass” left on the scrap-heap before they’re 18, destined for menial work and to repeat the same patterns into the next generation?

You know what? I think, as a society, we are. Not out of callousness, but because in these days when even families with two working parents can’t afford a mortgage, childcare or a few luxuries, fewer than ever have the energy to care. And with cuts or closure to Children’s Centres, even those people working to provide support are becoming fewer.

What can I do, I ask myself? How can I help? I don’t know the answer. I grew up in a single parent family myself and so qualified for free school meals, and so do many children today in similar circumstances. But I'm not sure these figures are about people like I was, the situational “working poor”. People like me, even with SEND, can still get themselves out of poverty and into university and a better life. I have a feeling these figures reflect generationally poor families who have little hope or aspiration for success because they don’t see it around them and they get little encouragement at school because little is expected of them. Is it any wonder that children become enamoured with those famous-for-virtually-nothings they see on social media – with so many being discarded in their school years, emulating their YouTube heroes is at least one way they can dream for a better tomorrow.

You can read the entire thing for yourself by clicking here

And now for the infographic

Here's the snazzy infographic that tells the story in pictures. As ever, it's free for you to share, download and print with the SNJ credit intact. 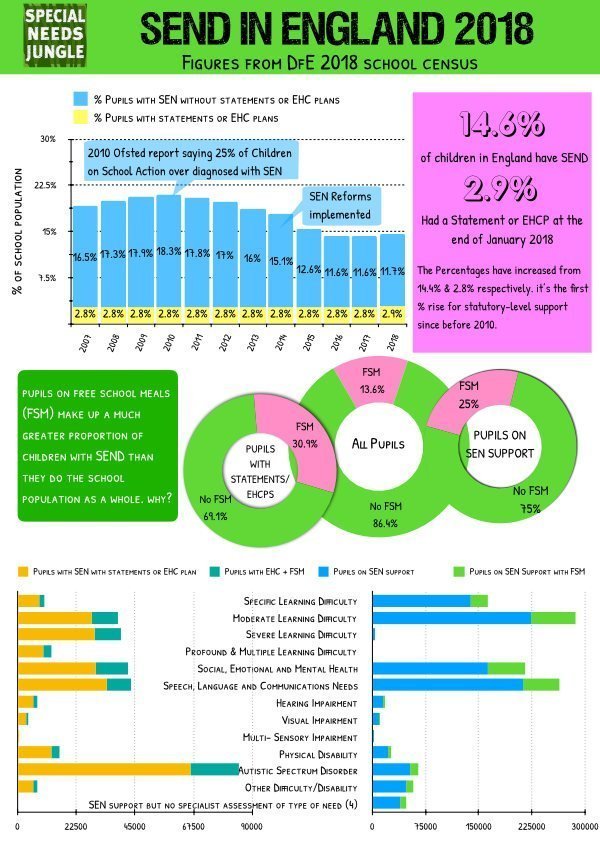