When I started out blogging here on SNJ, before social sharing was a 'thing', there really wasn't anyone else out there. Perhaps a few in the US, maybe one other here, it's hard to remember. These days though, there is an entire community of SEND parent bloggers who are talking about their experiences in blogs large and small, established and newbie, social media mavens or just finding their feet.

They all started out wanting the same thing: to highlight their experience and hope it may help another parent who was feeling isolated or maybe even change the system, just a little bit. It's certainly why I started. As I said the other day, I thought I'd be done by now and we'd be living in post-reform utopia, but reading the blogs from this new generation of bloggers, their experience is little different from mine a decade ago.

This August, I thought it was time we celebrated a few of these new SEND torch-bearers. Some may already be in your list of favourite reads, others will be new to you. Our first two include The Long Chain, from Alex Davey, about her family life that includes a son with many complex conditions but no overall diagnosis.  Alex has blogged consistently since she started three years ago and her story-telling has resonated with other parents of undiagnosed children and the unique issues they face.

But first, we feature a blog that seems to have exploded on to the scene from nowhere at the start of this year. It's by three mums known as itmustbemum and one of them, Peter and Lily's mum, is our first featured blogger. 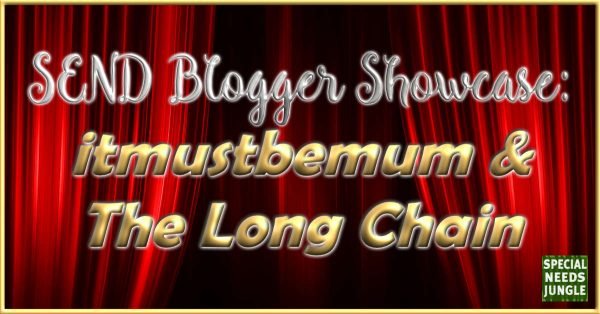 I’ve been knocking around the special needs world for a relatively short period of time - but blimey have I learned a lot!  I spent the first few years in a state of shock for two reasons.  Firstly, I knew Peter was anxious but I was clueless about him being autistic - that was a lot to get my head around.  Secondly, I could not for the life of me fathom out why those in the education system behaved the way they did?  It made no sense. 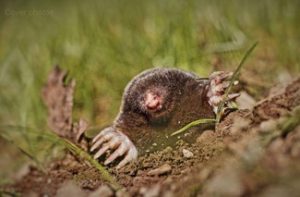 My background is in health, and let’s face it if you go to a GP with symptoms of asthma their first response isn't to tell you those symptoms are your fault or that they don't exist.  Their instincts don't jump to ‘how can I avoid prescribing an inhaler’ and their treatment is based on evidence and guidance - they don't need a law to be passed to make them plan and implement the treatment that you need to live the best life you can.  I was used to a very different culture of working.

Just before Peter’s 10th birthday he was admitted to a children's psychiatric ward with unmet need and school related trauma.  The foul behaviour from those in power intensified and I was advised to join some closed groups that offer advice and support to families like ours.  This is where my learning really began.

It wasn't just me.  How can that be?  How can the illogical and unhelpful behaviour we had experienced be so common?  I have an unusual passion for public policy and experience in implementing health policy across wide geographies.  This behaviour in education made no sense to me.  Having been in ‘freeze mode’ for years, my brain came back to life.  With the support of experts within these groups and the generosity of those who shared their stories, I was able to learn and reflect more objectively on what was going on.

I soon found myself offering up suggestions to others in the groups, often typing the same information over and over.  I found myself wondering how much better it would be if I could write up the advice and then just attach it each time the topic came up?  Around the same time, I plucked up the courage to approach someone with the story I had written about Peter’s admission to the psychiatric unit.  This wonderful person I now consider to be an online mentor was able to put me in touch with an expert blogger who was incredibly generous with her time.

Peter had named the story about his experiences ‘itmustbemum’.  At first, it felt like a rather angry, defensive name and I nearly scrapped it, but over time I felt differently.  I wanted there to be a constant reminder of the culture and it’s pretty easy to remember!  So itmustbemum the blog was born.

itmustbemum is about a few things.  Firstly a resource for things like what do to if: your child is too anxious to go to school, you want a copy of the information written about them or you are being misinformed about when to apply for an Education Health and Care Assessment.  Secondly, it is about exposing as much as possible of the ludicrous practice that seems to me the norm; like a teacher deciding that a medical diagnosis is wrong.  Two other mums formed part of this project with me and over time more have joined in, and so thirdly we aim to reflect on our experiences in a way that reassures as many as possible they're not alone in the confusion and isolation that we can all be subject to. 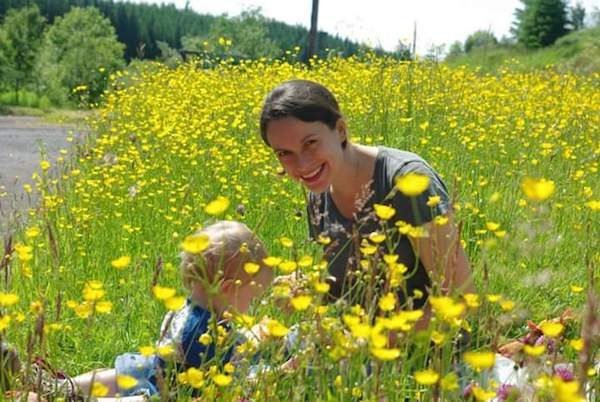 I’m Alex, married with three children and two guinea pigs. My big girl, Jackie, is five and super-excited about starting school next term. Benjamin is three and a complete charmer. He was born with severe and complex needs including microlissencephaly, quadriplegic cerebral palsy and epilepsy. He currently has no overarching diagnosis. Little sister, Caitlin is 16 months old and an absolute comedian. I’m incredibly fortunate that they all get on well and love each other to bits, even if they are a bit rough with the guinea pigs… In my spare time I work as a botanist and science writer. We live in Scotland, UK.

What I blog about and why I started blogging

Three weeks before Benjamin was born, we received the news that he would likely be very severely disabled and were given the option to terminate the pregnancy. Making the choice to continue was the hardest thing I have ever had to do and frankly, almost broke me and my marriage. I started writing as a way to explain my feelings surrounding this, both to others and to myself.

My blog is still a place for me to work through my feelings – I often don’t know what I really think about something until I start writing! I use it to keep Benjamin’s growing band of fans up-to-date with how he’s doing, to support the wonderful charities that help support us, and to campaign against the discrimination and unfairness that face disabled people and families with disabled children – something I was only vaguely aware of before I had Benjamin.

If I had a real, working magic want (in addition to my daughter’s half-dozen fairy wands, witches’ wands and Elsa wands that are lying around the house for me to fall over), I would abolish the ‘postcode lottery’ that exists for just about everything SEND children need. Equipment. Medicines. Hospital waiting lists. Access to therapists. Special formula feeds. Childcare. Social care. Respite. Blue badges. Free spectacles, … the list just goes on and on (and on). Provision differs between local authorities, between health authorities, between counties, regions and the countries that make up the UK. And it makes the unfairness of having a SEND child seem, well, even more unfair.

We are the lucky ones. We live in Scotland – which seems in general to fund its public services better than England (at least that’s my impression, I completely admit I haven’t studied the budgets of the two countries, I spend enough time on paperwork as it is). And within Scotland we live in East Lothian. East Lothian has the best of both worlds – it is a close to Edinburgh and the wonderful Sick Kids Hospital, but it is also a relatively small, rural county. This seems to mean that teams like physios and OTs are tight enough to know us personally and to care about us. Benjamin isn’t just a name on a list of appointments, who can be delayed or cancelled at will. Benjamin is Benjamin – all our therapists love him and treat us like friends. They wouldn’t dream of letting us down. In fact they pull out all the stops to get him what he needs.

Even in the Sick Kids, most of the teams and nurses know Benjamin – sometimes they even fight over getting to care for him! They make an effort to combine our many outpatient appointments into as few days as possible. They make exceptions for me to bring my daughters onto the ward when I have no other option. They even sneak me bootlegged pieces of toast! (I hope this doesn’t get anyone into trouble). I don’t know whether this is just because we are ‘frequent flyers,’ or because the hospital is small and the staff super-dedicated. I wish all SEND children could experience this level of service.

The same goes for education. There are two specialist units at primary level in East Lothian, one of which is suitable for Benjamin. But it is more than suitable, it is brilliant. Well-equipped, with the most talented, motivated, caring staff imaginable. Benjy doesn’t just get taught, he gets spoiled. The staff are falling over themselves to sneak cuddles and he laps it up! Yes, we had to fight to get the clinical support to enable him to attend safely, but even this, once we had proved he needed it, has been facilitated quickly, professionally and with a real thought to the long-term. We are so very fortunate, and sadly, so very unusual. If I had a magic wand, I would use it to spread the East Lothian model across the country.