You’re probably reading this because you are involved as the parent, carer, advocate or educator of a young person with SEND. It’s likely you’ve had some contact or information from a charity focused on your child’s needs, even if it were just a glance at their website for ideas; you may imagine that charity’s income is raised entirely from donations, car boot sales, marathons, auctions and the sale of mugs and t-shirts.

In many cases, you’d be wrong. In England and Wales, charities receive over £12bn a year from government, including many charities specialising in SEND: this money funds essential training, research, support for families and direct intervention for children and young people. Much of it now is under contract, pushing charities – and children – into a minefield of targets, service delivery, ‘resilience-testing’ and regulation that can leave them stretched to breaking point. 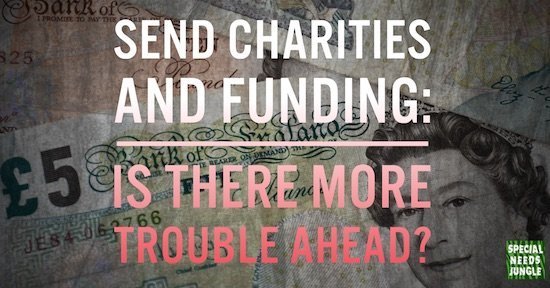 Two stories this year about charities receiving funding from the Department for Education (DfE) illustrate the risks facing both sides. It’s important that we remain aware of these risks because, if something goes wrong, children and young people with SEND and their families are severely impacted. We should also consider how far we want our charities to remain independent: the risks to a charity are not necessarily reduced by government funding but their ability to speak out on behalf of children with SEND may be.

In September, Civil Society reported claims that the sudden closure of the British Association for Adoption and Fostering (BAAF) was forced by a £650,000 overspend on a DfE contract. Former BAAF employees claimed the charity was obliged to update its IT system to meet DfE security requirements at a cost of half a million pounds. Further overspending, they said, was caused by providing a series of Adoption Activity Days under contract to the DfE which cost BAAF far more than the DfE paid. 71 jobs were lost as a result of the closure. However, BAAF (which is now partnered with CORAM, another recipient of DfE funding) blamed "prevailing economic conditions".

The former employees noted bitterly that BAAF had worked with over 90,000 children yet its closure received no publicity while the failure of Kids Company, working with a much smaller number of children, was widely reported. Of course, the public money involved was far greater in the case of Kids Company and the management of the charity was controversial. But again the DfE was involved.

In a strategy agreed with the Department, Kids Company was encouraged to reduce its reliance on grants from central government. Two civil servants seconded to Kids Company in 2011 made 82 applications to Local Authorities for funding but not a single application was successful. The following year, the charity failed in its bid to the Social Action Fund. The DfE withdrew from funding decisions in July 2013. The crisis at Kids Company divides public opinion but a grant of over £4m from the coalition government last winter is not in dispute; a further £3m emergency funding was negotiated, with conditions, just before the charity collapsed amid a storm of conflicting accusations.

The DfE contracts with charities and community organisations to provide services for children and young people with disabilities and their families covering a range of needs including autism, dyslexia, sensory and multi-sensory impairments, speech, language and communication. Here I must declare an interest: as part of the SEND reforms, the DfE funds the Council for Disabled Children to manage the Independent Supporters programme of which I am an unpaid Board member (I am the school SENCo representative). The DfE monitors this and all its programmes very closely and lessons learned from each project inform the rest.

Some funding continues to be given in grants and earlier this year the Secretary of State, Nicky Morgan, announced grants supporting SEND to the following organisations:

I can see a good argument for each of those awards that will hopefully make a real difference in improving lives; and I’m relieved this work is being funded through grants rather than contracts. But I suspect the pattern will change once the SEND reforms are no longer making the news…

Latest available data suggests the largest charity working on SEND services with the DfE is Mencap, the 13th largest spending charity in England and Wales in 2013/14 (£192.5m) and almost twice the size of Scope, which runs Ingfield Manor School for children with cerebral palsy. Children placed at Ingfield Manor are generally funded through Statements of SEN from their Local Authority, illustrating another aspect of the relationship: charities rely on income not only from central government but also from local authorities. Changes in legislation can shift such commitments from one funding agency to another.

Until this year, the Skills Funding Agency contracted with charitable providers of education and training for students aged 19 with disabilities; but now students aged 19-25 with an Education, Health and Care Plan will be funded by their LA with top-up funding from the Education Funding Agency. Charities which provide services to this age group will need to adapt to the changing landscape.

During the years of the coalition government, from 2010-15, voluntary sector income from government bodies fell from over £15bn to below £13bn and is set to fall further. Whilst charities’ total income in England and Wales grew by £4.6bn in the year to September 2015, receipts from government are expected to drop by the same amount before the next general election.

A further dramatic change in the relationship between government and the charitable sector is the switch from grants to contracts: grants are now at one third of their level a decade ago. Instead of putting in bids for cash, charities are tendering for service contracts and they need to show financial resilience to withstand the inevitable cash-flow pressures. One effect of contracting can be that a charity increases its activity and its payroll; unless the contract is renewed, the charity then faces a funding gap which can lead to instability and reputational damage.

It’s important that the DfE supports the work of charities which provide for children with complex and often rare conditions in a society which is far too quick to walk away. Improved survival rates for babies with special needs mean that this work must continue and increase. As I concluded in my last post (on compassionate communities), society is becoming ever more competitive and hard-edged. Young people with SEND need charitable organisations which can quickly respond to their changing needs AND they need the DfE to lend support and plan for the future. We need to keep a balanced view: but I’ll admit that, for reasons which have become very obvious this year, I’m concerned when charities become heavily dependent on government funding.