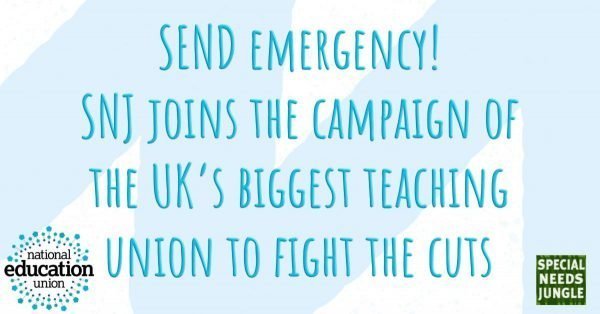 The pressure is mounting on Damian Hinds, the Education Secretary to act now to solve the crisis in SEND funding. Not only have parents crowdfunded (and easily hit their target) to try to Judicially Review the Government's SEND funding, teaching professionals are making their own stand against the cuts that have left many unable to support their most vulnerable pupils.

Also this week, it's become apparent that the Department for Education has a very strange way of doing its accounting. It's been revealed that when it claims to be 'spending more on schools than ever before' it's including student loans - i.e, the money that students borrow to pay their university tuition fees that they eventually pay back (or don't) to the government. On top of this, it's also inlcuding the money that parents spend on private schools fees. Yes, that's not a typo.

The UK Statistics Authority said it had received complaints about a recent claim, made by the Department for Education and the schools standards minister, Nick Gibb, that the UK’s spending on education was the third highest in the world.

But the claim, based on OECD figures, was revealed by the BBC to include university student tuition loans as well as the fees paid by private school pupils, which fall outside the DfE’s budget. The Guardian

Last Friday, head teachers marched on Westminster to show their anger at education cuts in general. Meanwhile this week, Surrey parents had their two-day Judicial Review hearing at the High Court this week against £20 million planned cuts to SEND, against a local authority whose case was convoluted and left many scratching their heads. When is a budget not a budget? Ask Surrey, because I still can't figure it out.

The anger has spread across the teaching sector. Earlier this week, Renata and I met with the National Education Union - that's the new(ish) amalgamation of the National Union of Teachers (NUT) and the Associaltion of Teachers and Lecturers (ATL) making it the UK's biggest education union. We talked about their work with the School Cuts group, and the petition that's urging the government to:

We've signed the petition and are happy to join with the NEU in their campaign. We hope you will do the same and we'll be bringing you more about it in the next few weeks. The petition already has 30,000 names but its goal is over 51,000. Let's get them there - we're all on the same side.

Today, Mari Burton of the NEU is here to tell us more about why they're campaigning.

There is an emergency happening in SEND education under Secretary of State Damian Hinds’ watch. Let’s make him sit up and listen. Enough is enough

All children deserve access to a well-funded and effectively delivered education. The National Education Union have been working with the School Cuts Coalition to launch an online petition calling for more school funding for children and young people with Special Educational Needs and Disabilities.

Teachers, local councillors, MPs and parents have signed up to demand that the Government provide the funding necessary for schools and local councils to give children with SEND adequate support. The petition will be delivered directly to the Department for Education on Tuesday 23rd October and currently stands at over 30,000 signatures.

We will hold the Government to account for the way they have treated SEND education funding. All children have the right to access a fair and well-rounded education. Children with SEND should not be side-lined in this way.

If you would like to join us on the day to show your support for fair SEND funding please email info@schoolcuts.org.uk with the subject line ‘#SENDcrisis’.

For years, the National Education Union  has been calling on the Government to make education funding a priority. Now, with parents, teachers, support staff, schools and LAs facing more pressure than ever in the face of yet more Government cuts it is the pupils who need the most support who are facing the biggest shortfall.

Since 2015/16 the number of children and young people with a Statement or EHC Plan has risen from 240,000 to 320,000 – an increase of 33%. However, over the same period the High Needs Block – the pot of money reserved for pupils with severe or complex additional learning needs – has only risen by 8%, from £5.5 billion to £6 billion in today’s prices. To add to this, it has emerged that in January 2018 over 2000 children with SEND were awaiting provision for their education – a shocking and unacceptable fact.

Despite the Government’s claims that “there is more money going into schools than ever before” it is clear that the crisis in education funding is hitting schools hard, and having the most profound impact on children with SEND and their families.

A teacher speaks about the problem with SEND funding

Meet Yvonne. She's been in education for 33 years and she's never seen the funding so bad, particularly for children with special needs. Please watch the video below, then sign the petition.

Can't see the video? Find it on Facebook here

Who are the School Cuts Coalition?

The School Cuts Coalition is comprised of a group of unions representing teachers and support staff in schools. It is made up of the National Education Union, the National Association of Head Teachers (NAHT), the Association of School and College Leaders (ASCL), GMB, Unison and Unite. The School Cuts Coalition have been working together and with other stakeholders in education, including parent activist groups and local councillors, to highlight the damaging effect cuts to school funding has had on education throughout the country. Find out more at www.schoolcuts.org.uk