Another day another set of figures to wade through... this time though, it's the annual school SEND figures from the school census that tells us how many children there are in England with SEND (or at least with a registered special educational need)

As you may have come to expect, I'm going to let our infographics do the talking, but here are a few highlights in text: 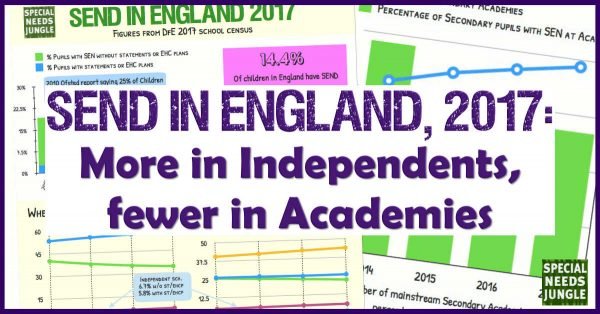 "Prior to ‘SEN support’, schools were required to record, on the census, a primary type of need only for those children and young people at ‘school action plus’ or with statements, but not for those at ‘school action’.  It is very likely that the primary type of need would have been known for the majority of those children and young people ahead of previous census dates. This time around, we think ‘SEN but no specialist assessment of type of need’ numbers may well include a number of children who are receiving support that is additional to or different from that made for most pupils but for whom it has not been possible by the time of the census to establish a definite primary type of need. This may be because specialist advice has not been sought. In January 2015, 28,490 pupils were in this category.

Whoa, there... In 2015, 28,490 and two years later, the figure is 13k higher? What's going on? So, okay, the DfE's reasoning sounded plausible back in January 2015; those children who may have been on School Action but who hadn't had any kind of assessment - sort of 'bung in a bit of this and that and keep the parents quiet', kind of thing.

But now, in January 2017, why are there so many more children still in this category? Are they new children undergoing initial assessment or are they still the old SA-type kids who have not yet had one at all (and may never get one)?

These cannot, presumably, be transfers to EHCPs as these children will have already had their SEND categorised when they got their statements. So these most be children who have some kind of support, but as no one knows for sure what the problem is, it may be suitable or not (depending on the skill of the teacher or SENCo, presumably).

And what about those who have a statement of EHCP in this category? Please, someone enlighten me as to how this can be so as I'm flummoxed.

And the shocker we all really knew about?

The number of Academy schools is rising year on year. In Primary years, the percentage of children with SEND has stayed relatively stable. In Secondary years however, the reverse trend is true.

There were 432 more Academy schools by January 2017 when the census was completed than there were in the same month in 2014, just before the reforms became law. Back then, there 17.3% of children in mainstream Academies had some type of SEND. This was pretty much in line with the national picture as it had been in previous years. Just three years later in January 2017, that percentage had dropped to 12.1%, two percent below the national figure.

The differential began to widen between 2014 and 2015, as the reforms were implemented. So, in answer to the question do mainstream Academies turn away children with SEND, posed by Malcolm Reeve on SNJ some time ago, the answer seems to be - YES - as our graphic shows clearly. 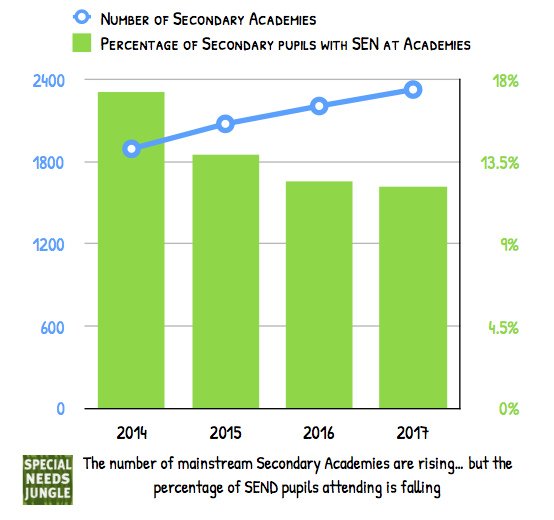 So here is the graphic, illustrating the points already made. Feel free to download, print and share this and the graphic above, with credit to SNJ, of course.

If you would like a printable PDF, you can get it by clicking here.

What are your thoughts on the 2016 SEND in England stats? Have I missed something? Is my analysis incorrect? Let us know in the comments here on the blog.