As you know, we’ve been following the development of the SEND inspections developed jointly by Ofsted and CQC. Barney has even written a helpful guide for parents to help you understand what they're about.

The inspections began in May and so far, results have been made public from seven LAs. Check this page to see if yours is one of them. So far, there are reports for just seven out of 152 local authorities in England, though to be fair, they’ve only been going since May.

However, as we’ve said before, if they had starting developing the accountability system at the same time as the special educational needs  and disability reforms, then a yardstick for what was expected of LAs and the NHS could have been understood much earlier on, instead of only starting 18 months after the reforms were implemented. But we have what we have so while the inspectors may give written spankings to many of the LAs/NHS, it is families who have, and continue to, suffer through the chaos up and down the country. 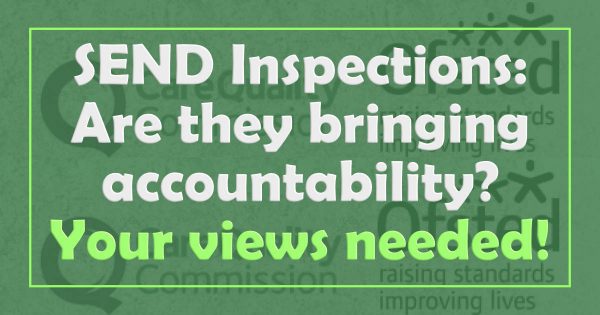 The outcome letters from the joint inspections are somewhat lacking in details of what is supposed to be a thorough five-day long inspection. Is this the only feedback given to those inspected, or just the public version? Perhaps some of it was verbal and if so, I hope someone wrote it down, somewhere.

Each report has a standard covering letter, outlining what it examined over course of the inspection:

"Inspectors spoke with children and young people who have special educational needs and disabilities, parents and carers, representatives of the local authority and National Health Service (NHS) officers. They visited a range of providers and spoke to leaders, staff and governors about how they were implementing the special educational needs and disability reforms. Inspectors looked at a range of information about the performance of the local area, including the local area’s self-evaluation. Inspectors also met with leaders from the local area for health, social care and education. Inspectors reviewed performance data and evidence about the local offer and joint commissioning."

This is followed by these headings and sub-headings:

Err, that’s it. For a five-day inspection, each report has between six and nine pages, including the covering letter. It isn’t explained if the inspectors have a standardised checklist of things to look out for during the visits, before this is distilled into a narrative. There is an inspector's handbook to guide them through an inspection and interestingly, one paragraph says that when informing the area of the inspection, the inspector should:

request that the local authority informs parents and carers of children and young people who have special educational needs and/or disabilities who are resident in the local area of the inspection and how they can contribute their views; Ofsted and CQC will provide a draft letter for this purpose that may be adapted as necessary

We would like to know, if you are in one of the areas already inspected, were you thus informed? Especially if you are not part of a Parent Carer Forum who you would expect (at a minimum) to be told of the impending visit.

The results so far

There appears, so far, to be little consensus in what areas are doing well although we noted the following:

One area where no one was doing well is apparent: EHCP Transfers. Timescales are not being met and when they are, the quality of the EHCP suffers as a result. And this is where the children already have a statement and so their SEND are already largely known. For new entrants to the system, it may well be much worse.

Some areas reported good levels of involvement of parents. This was mentioned in strategic terms for working with Parent Carer Forums although in one area, parents said they were consulted at a strategic level, but their views were then ignored. On an individual level, many parents said they felt involved with their child’s SEND provision in school, but some said the things they had told health professionals were misrepresented in reports.

Having read through the reports so far published, we are a concerned that there is no real 'drill-down' detail in the reports that point to not just what isn’t right, but why. Nor are there any recommendations on how to improve. Are these published reports everything that inspectors have found or are they each just a summary for public consumption that fits in with the standard headings given? If so, where is the rest of it?

While inspectors may have had in-depth talks with LA department heads over and above these reports during the actual inspections, it is extremely important that parents and the public know, transparently and in detail, what has been said and every aspect that was inspected.

In short, there are no SMART targets for action. (Specific, Measurable, Attainable, Realistic, Timely) It’s a bit like many EHCPs, ironically...

How can the inspections bring improvements?

How are LAs supposed to improve based on these reports? Where are the points to act on? How can parents hold them accountable for any improvements that are made as a result? Indeed, how can parents actually hold their LA accountable for where they are currently failing disabled children and their families? Or is this just supposed to be a tick-box exercise? Accountability inspection? Check!

After everything that families have been put through and after the delay in inspections for so long, disabled children and their families surely deserve better.

One notable quote from a report shows just how poor some LAs are:

“There is a mismatch between information in the annual census for the Department for Education (DfE) and information within the local area on the proportions of children and young people identified with moderate learning difficulties and those with autism. This means that the local area does not have accurate information for commissioning, planning and monitoring the quality of the support required.”

This is so fundamental that whoever is in charge here should be answering some very serious questions.

Why are SMART targets important?

What is the point of a report without actionable recommendations? Identifying the issues is only one step (and it’s debatable whether these reports do that thoroughly. We’ll leave that for parents in those areas to decide). Without targets for improvement that are Specific, Measurable, Attainable, Realistic and Timely, how can local authorities understand how to move forward?

Perhaps Ofsted/CQC are expecting each LA to sit down with their respective reports and do something about them. Who’s gonna make them? Parents? The DfE and its Regional SEND Advisors?

Nowhere in the reports does it point to where the law, as spelled out in the Children and Families’ Act and the Code of Practice, is being consistently broken, as we know it is in more than one of these areas so far inspected. What is accountability in this regard anyway? It should be a lot stronger than an “Area for Development”

LAs need to be told EXACTLY what they are doing wrong - including illegal practice and failings in cooperative working -  and that needs to be made public as part of the report. Then, steps to rectify these issues should be spelled out. We get that this is a first inspection and LAs need to be helped more than punished, but a report without any detail in either faults or recommendations gives them nothing to work with.

What also needs to be done is the areas of good practice that have been noted should be highlighted, detailed and spread around. If it works, tell others so they can do it well too. Stop making each LA invent the wheel and give them something tangible and proven to work with. Additionally, if there are no detailed findings, how does anyone know if improvements have been made?

Notably, these reports have no kind of grading of Poor, Adequate, Good, etc. While it is true that there is no previous yardstick, an experienced inspector or SEND expert surely knows what ‘good’ looks like?

As a result, LAs can ‘cherry pick’ from the comments the inspectors make as to what they will take seriously. For example, one area's report states that it is doing well, then further down, says parents are very dissatisfied. Do these parents’ views have no bearing on the outcome of an inspection? Meanwhile, a leader for that council (the same as the one with the 'mismatch' in numbers, above, is quoted as saying he is, "...pleased that Ofsted has recognised some of the excellent work we are doing in this area.”

How many parents in areas whose results have been published actually agree with the findings and feel that they match their own experience? We’d like these answers and we think you would too.

When your area has been inspected, come back here and fill in this form. You can find out if yours has been here. We’ll add to this as more are announced and re-share the post each time we add a new LA.

To help us build up a national picture, please read your area’s SEND inspection report (believe us, it won’t take long) and then fill in the short survey below. You DON’T need to go into detail about your own family’s experience so it should be a short survey.