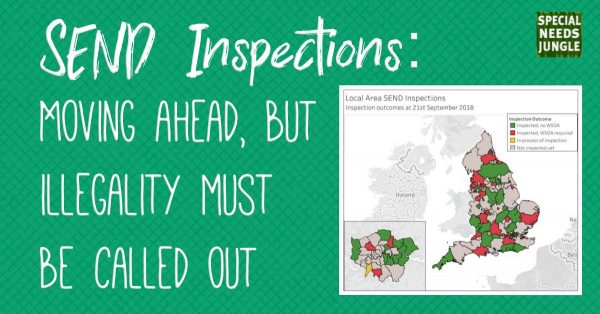 Accountability is not a word that parents often used to associate with the world of special educational needs and disability. So when the government announced three years ago that independent inspectors would be checking how well the 2014 SEND reforms were being implemented, most people involved in SEND were cautiously optimistic.

Each of England’s 152 ‘local areas’ (that’s the local authority, together with the NHS clinical commissioning group or groups that work in the local authority’s patch) get a week-long inspection, conducted by Ofsted and the Care Quality Commission, to see how effectively they’re implementing the 2014 SEND reforms. All 152 local areas will be inspected by the spring of 2021.

These inspections don’t work like Ofsted school or social care inspections – there’s no grading system from outstanding to inadequate. And strictly speaking, there’s no pass or fail system either, but if inspectors assess that there are “significant concerns” about a local area’s implementation of the SEND reforms, they will recommend to Amanda Spielman (Her Majesty’s Chief Inspector, the head of Ofsted) that the local area should submit a ‘written statement of action’ (WSOA), where the local area has to lay out what it’s going to do to sort out the issues that inspectors are particularly concerned about.

How are local areas doing?

At the time of writing, 68 of England’s 152 local areas have been inspected and received an ‘outcome letter’ report, and two more local areas are still in the inspection process. As of this week, three more area have active inspections - Southend on Sea, Lincolnshire and Northumberland. If you live in these areas, please check out yesterday's SNJ Twitter or Facebook page feed for details

If you're not sure, Check out the image below (click to enlarge) or click here to see the interactive map  to see whether your local area’s been inspected yet, and if so, how it went.

If you want to find the report for your local area, you can find it here. The image below has a static version of the same map.

So far, 30 of the 68 inspected local areas have been told to put together a written statement of action – and as time passes, local areas appear to be found increasingly wanting. Over half of the local areas inspected in 2017 were told to submit a WSOA, and the same strike rate has applied so far in 2018. That would be pretty shocking, unless you're a parent living in these areas.

Inspectors look hard at systems, structures and strategy, and that’s where they’ve found the most weaknesses:

Illegal practice easy to spot but rarely picked up on

But it’s also interesting to notice the dogs that don’t bark. So far, only one local area has had an outcome letter where inspectors have explicitly called out concerns about illegal practice.

The illegal practice identified in Oldham was blatant even by LA SEND standards – for example, some requests for EHC needs assessment were being refused within 24 hours of receipt.

Nonetheless, it is striking how infrequently inspectors appear to detect and report unlawful practice, particularly given how easy it is to discover it – from parents, from professionals, from SENDISTand the Local Government and Social Care Ombudsman, from MPs, from media, from councillors, and sometimes, even in plain sight on local authority websites (PDF).

And inevitably, some local areas are trying to learn how to game the inspection process - and some LAs that have already been inspected are helping them.

“Brief schools being visited and focus groups prior to inspection to remind them of key messages”;

“Support schools and settings chosen by the SEND Inspector before and after inspection e.g. Inspectors will ask for an example of the settings’ case files so ask them to make sure they are up to date”;

What happens after a local area fails inspection?

When they were set up, the local area SEND inspections were supposed to be a one-shot deal - to find out how well each area was implementing the 2014 SEND reforms, to recognise good practice, and to advise on improvements where practice fell short.

If a local area’s SEND services were poor enough to warrant a written statement of action, then Ofsted and CQC inspectors make sure that the WSOA was fit for purpose – but they then step back. The task of making sure that the local area actually delivers on its improvement plan falls to central government - principally the Department for Education, who monitor with occasional visits and write to the local area a year later to let them know how they’ve got on.

This cosy, clubbable arrangement simply isn’t up to the job. It looks like it was designed for a world where only a small minority of local area SEND services would need remedial monitoring and improvement, and that’s not the world that most of us live in. In practice, the post-inspection monitoring arrangements have been gossamer-light. In most cases so far, monitoring has ended after a year, well before most local families have seen any real change. Some local areas have started to change their practice, but it’s a slow, incremental grind that’s not made any easier by the acute financial strain most councils and NHS organisations are experiencing.

Very few local areas are informing families directly about what’s changing, and some local areas have reported to councillors that they have been “signed off” further monitoring: mission accomplished, before anything has really changed on the ground. Parent groups have reported that external monitors have an unacceptably low threshold for meaningful action and progress.

What does the future hold?

SNJ raised its concerns about these arrangements back in the spring. Separately, other groups who are closer to Whitehall’s movers and shakers, like the National Network of Parent Carer Forums (NNPCF), have quietly and insistently raised their concerns about post-inspection arrangements.

And in July, the Secretary of State for Education, Damian Hinds, announced that changes were coming. He asked Ofsted and CQC to do two things:

Sounds promising? It does, but the detail is important - and right now, there isn’t a lot of it.

DfE, Ofsted and CQC are still discussing what the new arrangements will look like – and there are lots of basic details still being thrashed out. As of early September, they hadn’t fully agreed who actually has the authority to ‘close’ a written statement of action.

Ofsted’s budget has been cut to the bone – in financial terms, they aren’t well placed to take on a bigger, longer-lasting SEND inspection role. Ofsted’s accounts show (PDF) that the DfE subsidised the local area SEND inspections to the tune of £900,000 last year – will the DfE be dipping into their pockets again, or will Ofsted and CQC have to make do with what they've got?

There’s a lot that’s still unclear right now, but it looks like this one-off SEND inspection arrangement is slowly turning into something approaching an inspection cycle. On balance, that’s a good thing, particularly if you’re in a local area that’s going through the written statement of action wringer.

But if you’re a family in a local area that’s already been inspected but didn’t have to submit a WSOA, then the chances are that you’ll be waiting a long time for the accountability wagon to come rolling back into town. And that’s bad news.

The first cycle of inspections isn’t due to finish until the spring of 2021 – and meanwhile, there is some truly dreadful practice going on in a number of local areas that have already ‘passed’ their SEND inspections. There’ll be more to come on this from SNJ in the near future. Three years is a very long time to wait if you’re a family in one of these local areas – more than long enough to cause lasting damage to your child’s life chances.

Is there light at the end of the long, dark tunnel?

But things do appear to be improving. On the Ofsted side, the process is being managed by capable, committed senior inspectors who are increasingly listening to what parents and carers have to say, and who are making changes that will eventually improve the way that we can input into inspections. If you want to know more, read here and here.

But all the same, this is inspection, not regulation. It’s a process where local area SEND services are being inspected so that they can improve strategically – it’s not a process that ensures that local areas act lawfully first time, all the time. If your local area is acting unlawfully, and you need someone to hold your local area to account for your family’s individual case, then you cannot count on inspectors to resolve your situation. That’s not their job.

It should be someone’s job - but for the foreseeable future, families will all too often still need to resort to other forms of remedy. Even with better, longer-lasting inspections, with no regulator in sight, thousands of families will still need to resort to SENDIST, the LGSO, and the process of judicial review. SEND accountability is improving – but it’s still threadbare, and there’s much more to do to improve it.