Three days ahead of the deadline for pre-summer parliamentary approval, the Department for Education yesterday laid before Parliament its final draft of the new Code of Practice along with publishing a raft of other vital documents for the new SEND reform system.

I've been having trouble sleeping so Tania thoughtfully suggested that reading as much of them all as possible for an "overview" post today would solve my insomnia and help everyone reading this too. Please do share this post as widely as possible so as many parents as possible can read about the reforms. 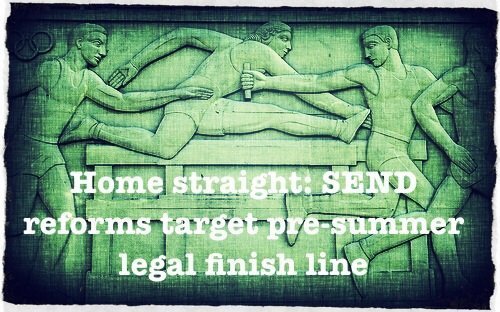 The Code must be approved by BOTH Houses of Parliament before it can come into force on 1 September 2014. This is when the new system, covering children and young people with special educational needs and disabilities from birth to age 25 in England is due to commence.

The code provides statutory guidance on duties, policies and procedures relating to part 3 of the Children and Families Act 2014 and all of the regulations that go along with it.

To be clear: Until then, the current SEN system remains in force until 1 September 2014.

So, this is what has now been published:

Now, I don't think Tania was asking me to read all 271 pages before today. Of course, she knows I could've, no problem...ahem... So this post is just an overview of the documents that everyone interested in SEND and our own SNJ team, will be poring over in the next couple of weeks.

We will be reporting on the changes in the Code of Practice in detail then but you can find the whole 271 pages on the Government website before that, if you feel that way inclined.

These are the time scales that local authorities and health partners must adhere to.

Following consultation, the new regulations and SEND Code of Practice will not require local authorities to use a single national template for EHC plans - this is a real disappointment for many families. However, dependent on parliamentary approval, EHC plans must include the following sections, which must be separately labelled from each other:

As part of their local offer, local authorities should set out a local policy for personal budgets which describes the services across education, health and social care that currently lend themselves to the use of personal budgets.  Or in English speak, the LA must state clearly which services families can be given a personal budget for.  This will be a really interesting section of the Local Offer - especially when looking at what other Local Authorities are offering.

From 1st September 2014 local authorities will be required to publish their local offer. Note, this is a duty on local authorities, there is no duty on schools, although of course schools will want to set out their stall for families to see what they provide (won't they?)

If you haven't seen your Local Offer or consultation, Bringing Us Together have produced a list of all the Local Offers and consultations available on line at the moment.

Transition period:
It was initially suggested that all transfers to Education Health and Care Plans should be completed by September 2017 but this has been extended to April 2018.

Transferring those with statements to Education, Health and Care Plans:

Local authorities should publish the first version of this plan by 1 September 2014.

So there you go, a not too brief summary of the transition process proposed.  This will hopefully help you to understand when the changes will start to have an effect on your own child's statement.

We will be writing more about the draft Code of Practice and other parts of today's publication soon again, but we know that the transition proposals are of real interest to families.

Is it clear from the guidance when your own child will move to an Education Health and Care Plan? What other questions do you have that you would like us to research for you?