I started Special Needs Jungle with the intention of spreading knowledge to parents about how to get themselves organised and prepared for their child’s statutory assessment application. I even wrote a little book about it, which was well-received and helped many on their way.

However, since the changes to England’s system, it has become increasingly obvious that in order to really improve the experiences of families, parents cannot be our only focus. It is those in local authorities, health and social care and, in particular, teachers who must be convinced that a) the law actually changed and b) their practice has to change too and indeed, is already two and a half years overdue. 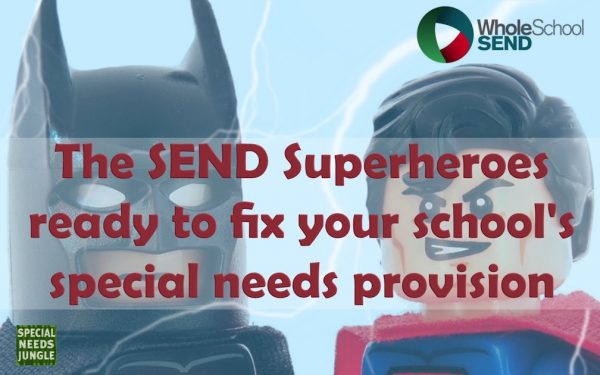 And so it was with this in mind that I accepted an invitation to co-host a round-table, with our columnist, SEND expert, Barney Angliss, at an ambitious Whole School SEND conference in London, put on by the London Leadership Strategy.

LLS are a group of high-flying SEND school leaders who have launched the Whole School SEND Consortium, described as “school-led and user-informed”. WSS’s teams aim to swoop, SEND superhero-like, into schools struggling with helping their special needs pupils. Once there, they work with the teaching staff using evidence-backed good practice, their own experience and useful tools that can transform children’s learning. They hope to leave a lasting legacy in schools they are invited in to help, so their influence permeates through the culture and outlasts staff turnover.

This is a fantastic initiative, although if last week’s survey into teacher attitudes is anything to go by they certainly have their work cut out and will doubtless need to clone themselves to get round all the schools clearly in need of assistance.

The summit was a who’s who of the SEND teacher Twitterati, including, besides Barney, our own columnists Nancy Gedge and Malcolm Reeve, among many others. I often wonder how they find time (and energy) to do so much tweeting given their workloads and if you’re into Twitter, here is a wholly incomplete list of tweeting teachers or “tweachers” that I will be adding to*.

Not just another conference

Where the Whole School SEND conference differed from others is that it also had a meaningful parent contingent of delegates, thanks to the generosity of Whole School SEND’s chair, Anita Kerwin-Nye, who was behind our offer of parent-teacher free ticket pairs.

There were several 'working with parents' table besides ours, including Sarah Driver of The Driver Youth Trust and her co-host, parent, Bethlyn Killey, herself a notable Twitter voice, who spoke about her parent experience and what she’s learned as a result. What this meant was that even if a practitioner-delegate managed to avoid one of our tables, they were still likely to be seated at a table with a parent-delegate discussing aspects of SEND. 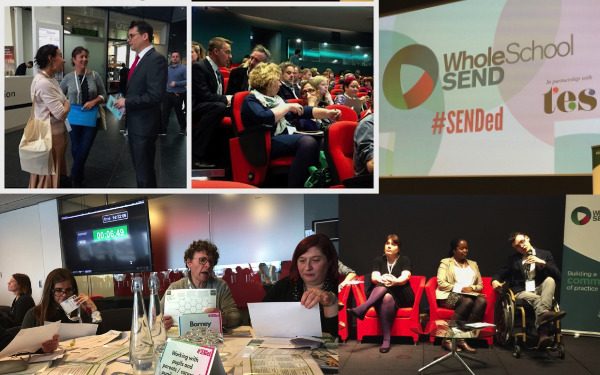 There is always the suspicion though, that these events are, in large part, preaching to the already converted, but this event seemed like a shout-out to schools, parents and young people that things can be different and help is available to make positive changes to your SEND provision.

The Consortium has already launched the SEND Review in partnership with schools, Ofsted and children’s disability charities. Part-funded by the DfE, it’s intended to act as a guide for schools to audit their SEND provision. LLS say it’s a, “direct response to the increasing gap in outcomes between students with SEND and their peers." They devised it with the purpose of empowering schools to improve their SEND provision and is made up of a paper-based audit, examples of good practice, SEND review guidance and self-evaluation templates. However, LLS says it’s best used in conjunction with school to school support.

So, what was achieved by the whole school SEND conference? For me, it was, in itself, an example of good practice in bringing parents and practitioners together to discuss SEND provision. It was billed as an opportunity to learn, share and contribute to good practice and, in that, it fulfilled its remit completely. So many (very expensive) SEND conferences have the cheek to talk about working with families without any parental input whatsoever.

It was also a clarion call of intent that it's time to change - well past time - to make SEND provision in EVERY school in the country of high quality that meets the needs of its pupils and the Whole School SEND initiative provides a means to do this. Of course the problem is that this is just one initiative compared with an entire country of schools across the spectrum of provision that urgently need the help. Some schools won’t even recognise they need it – and they’re probably the ones that need it the most.

The big draw was Children and Families Minister Edward Timpson. Having listened to his address, I was not the only parent to be surprised by a new terminology referring to parents who advocate for their own and other families: Agitators.

Dear Mr Timpson, please do NOT, in future, describe parents like us as 'agitators'. We are neither chemical stirrers, supporters of an ideology, nor a political movement.

I know you meant it in a positive sense that we are making a difference, but we don’t WANT to be campaigners, we just want to be parents happy that our children are getting the education they need, just like children without additional needs get. And I shouldn’t still need to be writing this blog at all, but sadly, it is apparent that parents need our resources more than ever.

They need it because you have failed, so far, Mr Timpson, to ensure that the new system is adopted heart and soul everywhere it needs to be. Please fully support this initiative financially and help it (or others like it) to expand, ensuring a rapid improvement in SEND provision not just in schools, but in LAs and NHS paediatric services too. These places have proved they can’t do it by themselves. Help initiatives like this guide them to fulfil the letter and the spirit of the reforms.

*Are you a SEND teacher not on my tweacher list?  😮 DM us @Spcialndsjungle (after following us of course!)

Agitators! Mr Timpson, Defenders would be more appropriate. And the system you preside over made us what we are today, whatever you choose to call us. It takes two to Tango! And if it weren’t for defenders ‘persuading’ services to work in partnership for individuals we support through work, social media and practical voluntary help, there would be three extra families in formal complaint in Herts this week rather than taking their children to school. And the LA Inspection’s wouldn’t have gone nearly so well either. This defender tries very hard to broker solutions through knowledge, and partnership when permitted.… Read more »

‘Assess, Plan, Do, Review’; ‘Know the law, apply the law’
Its not rocket science. And it should mean everyone works together in the interests of the CYP.
‘Agitators’
Name calling is very petty behaviour, Mr Timpson. Its narrow minded, unnecessary and divisive. Sorry but you got it very badly wrong.