When you appeal to the First-tier Tribunal (FTT) SEND Tribunal about an issue surrounding a child or young person's Education, Health and Social Care plan (EHCP), problems with the health and social care aspects cannot be dealt with. They have to go through separate complaints processes, something that is not only illogical but causes a great deal of additional stress for families. 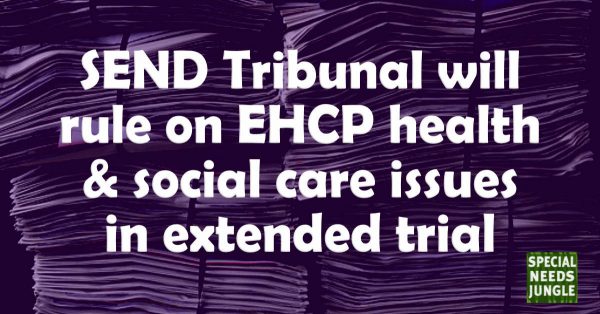 To start to explore a single route of redress for EHCP appeals, the SEND Tribunal last year ran a very limited trial involving just 17 of the 152 local authorities. It enabled judges to hear appeals about health and social care and make non-binding recommendations for the latter two as well as its directions for education issues. However, you must have an education issue to appeal as well as health and/or social care, you cannot appeal for just the latter two.

The trial had an overwhelmingly positive response and was evaluated in the comprehensive CEDAR report published in March 2017. However, perhaps unsurprisingly, it was decided that because the trial was so small, insufficient evidence had been gathered to decide whether to make it a national, permanent feature of the SEND Tribunal.

Robert Goodwill MP Minister of State for Children and Families has now announced that the trial will be extended to the whole of the England.  The trial will begin in March 2018 and will run for two years.

In the previous trial, the SEND Tribunal had the power to:

It's our assumption that these powers will be the same under the extended trial.

What did the trial show?

The CEDAR review (the trial information is in Chapter 7, from page 183) identified that the pilot encouraged more joint working across the three areas and most parents, LA representatives, mediators and parent organisation representatives were in favour of a single point of redress for the all the of the content of an EHC plan.

Pretty much everyone who took part in the trial from parents to LAs and local health bodies (Clinical Commissioning Groups or CCGs) recognised the logic of including health and social care in the process.

It also prompted improved joint working practices between education social care and health, for example, over the quality and timeliness of reports for EHC needs assessments and over joint funding of post-16 provision with adult social care and/or adult health services.

What's the point if they're non-binding?

So if health and social care providers cannot be legally compelled to do what they are supposed to do, why would they bother? However, the trial found that in almost every case the recommendations were implemented. In the case where it wasn't, the health body concerned objected to the fact that the report the decision had been based on was a private one and not an NHS one.
The Department for Education, in its response to the CEDAR report said,

So what happens now?

From March 2018 the FTT will be able to make ‘non-binding recommendations on the health and social care aspects of Education, Health and Care (EHC) plans.  The regulations will set out the new duties on all local authorities and health commissioners. Local authorities will be able to receive support from a company, specially appointed to provide back up. Senior health and social care commissioners will be invited to attend training in January and February.

What Does This Mean?

We are aware of the concerns about the lack of involvement of social care in the EHC Needs Assessment process or worse, when scare tactics are used against parents.  It is about time that a single point of redress can be used by parents, especially as the entire reforms were intended to make life easier for families and should have been included at the start - as was highlighted then. We do think however, that recommendations should be legally binding as this in itself will take the stress out of an incredibly stressful event. We will be looking out for the developments on the trial and it will be interesting to see how it works it practice.

The CEDAR review highlighted some instances in the trial review focus groups where staff already showed good practice and it is worth mentioning in this context:

"Conversely, where good working relationships were described among education, health and social care staff in relation to EHC plan processes, these focus group participants explained that disagreements that could be eligible for the Recommendations pilot would not be expected to reach the stage of an appeal.. Colleagues across the three domains would work together to resolve the situation, aware that such cases involved families already under immense stress. An example of such a case was described as follows:
“We had one pilot appeal case lodged and it was resolved out of panel. The parents wanted an out-of-county placement. Adult social care did an assessment and said they would fund the residential part so we paid the education part.” (LA focus group participant)

See, it's not that difficult if you try to obey the law really, is it? What are your views? Add them in the comments below.
Resources:

Follow me:
Marguerite Haye
Head of SEND at Sunshine Support
Marguerite Haye joined us as a columnist toward the end of 2015. She's knowledgeable in SEND legislation and embraces its ethos at the heart of everything she does, by adopting a child-centred approach to ensure every child receives the right provision. I have been involved in teaching for over 15 years in various positions and sectors, including being Head Teacher at a Specialist School for Autistic children and young people.
Marguerite can recognise individual learning abilities and uses her initiative to tailor learning programs to meet individual need.
Through effective leadership, Marguerite promotes an appropriate culture, empowers staff and demonstrates high standards.
Marguerite has built connections with parents, young people and professionals alike in her career
Follow me:
Latest posts by Marguerite Haye (see all)

Marguerite Haye joined us as a columnist toward the end of 2015. She's knowledgeable in SEND legislation and embraces its ethos at the heart of everything she does, by adopting a child-centred approach to ensure every child receives the right provision. I have been involved in teaching for over 15 years in various positions and sectors, including being Head Teacher at a Specialist School for Autistic children and young people. Marguerite can recognise individual learning abilities and uses her initiative to tailor learning programs to meet individual need. Through effective leadership, Marguerite promotes an appropriate culture, empowers staff and demonstrates high standards. Marguerite has built connections with parents, young people and professionals alike in her career
View all posts by Marguerite Haye →