We are separated in so many ways: time and distance, age and language, how you see ‘you’ and how I see ‘me’.

On Sunday I was helping at a Mass for adults with learning disabilities. I was happy to get involved but I imagined an afternoon of meeting new people and trying to learn names. I thought I would struggle for conversation, both because I’m an Aspie with little command of small talk and because the guests would have a variety of difficulties in communicating, no matter how willing they were.

An hour before, I was remembering a conversation I’d had with a boy in school about what makes talking easy and what makes it difficult. I asked him, “Is it better if they see you the way you see yourself?” He looked straight into my eyes for the first time and said, “Yes, much better”. That’s the truth of it. We can overcome most things when we feel there is understanding.

So I watched as guests arrived, I directed my teenage volunteers to greet them and guide them to seats; and I wondered whether I would know anyone at all. But one by one they appeared, faces I recognised, faces from when we were first married and new to the Parish, faces from wintry Saturday evenings when our children sat on the floor listening to hymns, faces from the local paper, from our address book, from the school and the supermarket.

In fact, I knew nearly all of them. At different times in my life I had met them, chatted with their families, done this and that to help – and then forgotten them. One was missing: a girl with autism who was placed in care many years ago, a long way from home; a girl who used to love the music, who moved and sang and laughed. She was tall, strong, exhausting. The family, pushed to the edge by her needs, gave in to pressure.

A young man with similar needs who used to live close by is now also in a home on the south coast; a care worker drove all the way with him to be at the Mass. One mother told me that placing people in care homes had made it so much harder to organise events and stay in touch. “It’s all very well,” she said, “I understand why they do it. But they’re so far away from family, from people they know, from their community.”

I spoke with the care worker from the south coast. She told me that, in the week before a gathering like this, it’s very exciting and you hear from a few people who are looking forward to meeting up again; but afterwards, there is nothing for weeks or months. “In between, nobody does anything…” 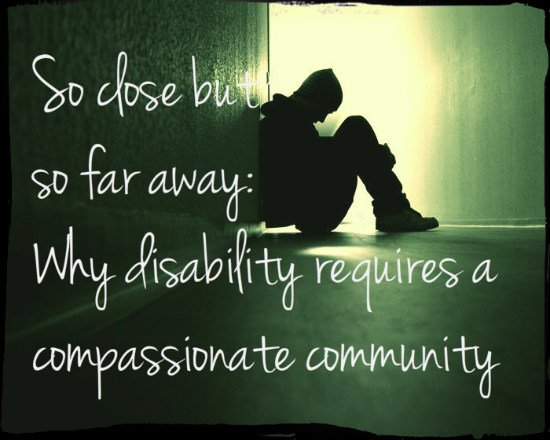 A man in his late forties read scripture with such care and feeling, though hesitant, that it was beautiful. And that was when it dawned on me, because I do the same and I love the echo and because, like him, I want to get each syllable just right when I know that everyone is listening; the words wrap themselves around me and I am nowhere, my voice is everywhere. In that moment, I was him and he was me. A woman with chronic depression put her arms around me, a man clapped, someone acted out the words of a hymn, a group carried gifts and there were no boundaries, no definitions, no labels, no policies, no judgements. I went to make a Mass for them but they made one for me instead.

Afterwards in the hall, we had tea; the raffle took forever, the teenagers overcame their fear and the organisers breathed a sigh of relief. So now I don’t want to forget them again, I don’t want there to be a long silence. I hope we can stay in touch.

So often it’s overlooked that children with disabilities will become adults with disabilities: the structure and systems of education (sometimes) work like a safety net; but in adult life that’s torn apart. Entitlement is blurred, purpose and motivation ebb away. Neighbours of mine with Alzheimer’s are struggling to fill the days; a Polish man up the road, who survived the war with PTSD, passed away unnoticed. While I blog and tweet about the special needs of children in schools, a huge number of adults with disabilities are left to their own devices by the state - and by people like me who just forget.

I suspect there’s a problem here with image: the poster children of special needs charities are more persuasive than the adults. The debate about classroom inclusion makes better headlines, too. So where are the teachers of adults with learning disabilities? Too expensive. Why has funding for adult education been decimated to protect the front-page story of the classroom? Because there are few votes in education but none at all in adult learning disability. Unless I’m even more insular than I thought, it must be true that we just don’t talk about life with a learning disability; only childhood. Statutory plans for education now extend to 25 years of age: two cheers. I heard a middle-aged man read in church on Sunday who needs to learn what the words mean and how to write his own creed.

The author Oliver James is right when he says, “The increasing drive to find a competitive edge in all aspects of our lives may create efficiencies but they are cold, heartless and unpleasant to live with.”

We need to connect with the people around us who cannot travel alone, who cannot pitch up at the drop of a hat when we’re celebrating, who are sometimes on our minds but seldom on our guest lists. They are largely invisible except to their carers. We need to pay the same attention to how we accommodate and educate adults with learning disabilities as we do to their younger selves.

Mark Neary writes an extraordinary blog on this subject which not only documents compassion but teaches us how to use it:

“If you're living with people who love you, you're not reliant on observation logs to keep you safe. Love sorts that out.”