When is a child with special educational needs, just not special enough?

It's when the local authority decides the child's SEND aren't severe enough to warrant taking over the placement funding at an independent special school where they're already thriving. Especially when the parents felt forced to do use a private special school because the LA didn't have suitable mainstream provision of its own.

But if that child then has to go into mainstream education because the parents can no longer afford all the school fees, then before long, they may begin to suffer from being in the wrong environment. Then, even the LA would have difficulty in denying that the child's special needs do pass that 'invisible' threshold because the child is now clearly failing.

Is it ethical to disrupt a child from where they are doing well, to see if they will then fail? Or is it unreasonable to expect the LA to be compelled to pick up some or all of the tab for a private special school the parents started out paying for themselves? Why would a child be accepted into a special school if their needs didn't warrant it? If so, shouldn't the council be funding the place as it does for many other SEND children?

SEND parent, Laura, who has, like many of us, begun helping other parents in need, takes up the story about a situation she's been involved with. Tell us your views in the comments at the end of the post 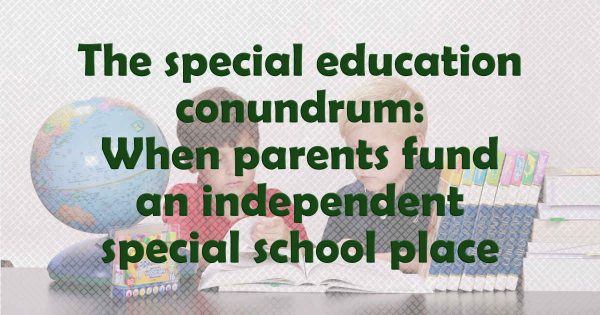 My name is Laura. I'm married and live in Oxford. My husband and I have one son, our only child. He was delivered 10 weeks early because I had liver failure. He was very small for that gestation, and has had various difficulties from the start. I now spend my time in advocacy and support for him, with some other campaigning, volunteering, studying and writing on the side. Often it's outside the world of special needs because I find I need a break from what I have to do as a parent.

I haven't been able to do paid work for a couple of years; I've been stressed out for too long and am very lucky that I can at least drop working (for money). Before this, I worked in a variety of areas from software project management, advising on content for historical and medical websites, and computerising and web publishing reference books for Oxford University Press. Instead, I have ended up providing some informal advice to other parents who hear of me through the grapevine, as other parents have so helpfully done for us.

This morning, I caught up with my exercise teacher who has a daughter at a local independent special school that specialises in dyslexia and dyspraxia. The girl is now 12 and I know about some of the family’s earlier struggles when she was at the same primary school as my son.

Yes, she has diagnosed auditory verbal processing difficulties, but she also became so withdrawn at the mainstream primary school that the SENCo assumed she was autistic. She was moved to the special school, into the year below her official cohort, able to start there through the bittersweet good fortune of a legacy from an uncle. She then went for an autism assessment at the Child and Adolescent Mental Health Service (CAMHS). She was so much happier at the special school that by the time the assessment date arrived, she was completely back out of her shell and CAMHS found no autism case to answer.

Next Tuesday, instead of taking our class, the teacher’s off seeing a SEND solicitor with a group of other parents from their school because none of them can afford to keep their children at the school, but all of them feel that their child would be best staying there, now the school has extended its scope to Year 11.

They’re not looking for full funding, but they do want some sort of subsidy from our local authority because staying put seems so much better an option than moving to large mainstream comprehensives with panicky or over-optimistic SEND support. In my teacher’s daughter’s case, they’ve considered sending her to the very highly-regarded school for mild learning difficulties, but that school found her, on application and appeal, too able for their programme.

They are caught: Parents taking their local authority to Tribunal because their children are so well-placed that they want them to stay where they are, while the LA says these children don't have severe enough needs for special education. The parents say they can guarantee, from bitter personal experience, that their children will have severe enough needs a year into life in a mainstream secondary school. How often is this pattern repeated across the country?

Our family has had a different experience. At nine, our son’s headteacher said she couldn’t imagine him successfully attending any of the local comprehensive secondary schools. This set us off on another round of diagnosis - our fourth attempt at confirming autism. This time we were pushing at an open door.

As a result of the autism diagnosis, he could be considered for an autism resource base within a mainstream secondary school and that’s where he’s ended up. He’s now 15 in year 10. He’s never been happy at school, but he’s managed to keep on attending through periods of physical and mental illness. He’s received a great deal of psychological and practical help, and he might conceivably pass a handful of GCSEs, which we’ve always taken as the marker of things going well. When things are going badly - disrupted sleep, and eating, and toileting, paralysing phobias, suicidal depression, dangerous aggression - GCSEs seem neither here nor there.

It seems bizarre that our son has received an enormous amount of support at a mainstream school because he’s never very happy, whereas a happy child with special needs being well met has to be moved out of a school where they could stay, to prove to the local authority that, as their parents say, they will become disastrously unhappy enough to qualify for the equivalent of their current level of help.