It's that time again.. the long (3 weeks in our case) Easter break. We took advantage last week of finishing a week earlier than state schools by heading down to Cornwall to stay in a beautiful lodge at a country club, before the price went up. 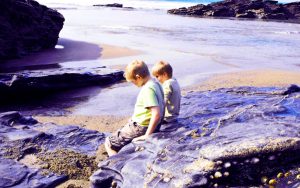 The boys refused to travel without extra pillows, soft toys, blankies, laptops etc, which made our car full to bursting point, but, once wedged in, off we set. We arrived a mere four hours later with only one incident during lunch at McDonalds when Youngest peeled off all the monopoly stickers while Son1 was in the toilets causing trembly lips and watery eyes and a promise to visit McDonalds again during the week (something to look forward to).

On arrival, the children were delighted to find the lodge had a jacuzzi bath and that was their evening entertainment set. Instructed to only use enough bubble bath to wash themselves with, I left them to it while I went to unpack.

I know, I know, although they are 9 & 11, they do have Asperger's and perhaps I should have sat with them, but they were just across the hallway and I could hear them twittering and giggling away. Some time later I also heard a retching sound and dashed in to find Son1 standing, covered in so much froth he looked like bubble man with a bubble top hat, arms outstretched and wailing that he had swallowed some bubbles and thrown up. In the jacuzzi. OMG! How long had we been there?!

They had totally ignored instructions and tipped half a bottle full of bubble bath into the already foaming jets. Once Son1 was hosed off in the shower, hubby and I then had the task of cleaning vomit out of the bath (thankfully the jets had been off).  Happy Holidays! More follows here.