The article on Samantha Cameron that appeared in The Daily Telegraph on Monday has caused a storm of outrage among Special Needs Jungle readers on our Facebook page.

In an article entitled, "Samantha Cameron: pain of son Ivan’s death will never go - Prime Minister’s wife shares agony of losing profoundly disabled child for first time", The Telegraph quoted from an interview in The Mail On Sunday with Sam Cam in which she said,

“Looking after a disabled child pushes you to the limits of what you can cope with … physically, emotionally,” Mrs Cameron said. “It’s because there’s this baby, this child that you love more than you can possibly imagine, in some way more than a normal child because you worry about them 24 hours a day. But at the same time you are so, so proud of them.

Her words are clearly heart-felt and any mother of a disabled child would be able to empathise with the Cameron's experience. Losing a child is the worst thing that can happen to any parent, whoever you are.

But for  commenters on our Facebook page. where we shared the article yesterday, that's where the sympathy ended.

Almost 100 comments and replies (and growing) were left by parents, some expressing disgust and anger at the fact that her first interview about Ivan since his tragic death has appeared just as election campaigning swings into high gear. 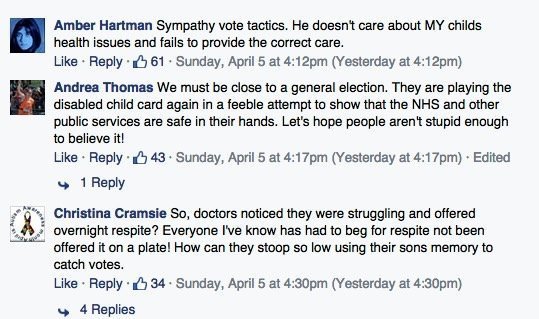 A small sample is below and we've embedded the post at the end so you can click through and read them yourself.

Was the article Samantha Cameron's idea or was she pushed into it by Tory election managers? It cannot have been a comfortable decision for her as a bereaved parent, knowing - and she must have known - that the accusations of a cynical attempt to exploit the tragedy for political purposes would surely follow.

In a time of austerity where deep cuts have been made to welfare and when George Osbourne is planning more should they get back in, anyone with an ounce of common sense could have predicted this response from the special needs and disability community. Perhaps the Conservative election strategists don't consider people like us to be crucial to securing a May victory.

Perhaps this was to shore up their support with Daily Mail readers who may be veering off towards voting for UKIP, for whom a reminder of a deeply emotional personal trauma such as the loss of a child can bring them back into the fold. It might be called crude campaigning, but that would, of course, depend on a view that people vote on sympathy rather than politics.

So, over to you... was it the right thing to do? How does it affect your opinion? Let us know in the comments in this post.

"We must be close to a general election. They are playing the disabled child card again in a feeble attempt to show that the NHS and other public services are safe in their hands. Let's hope people aren't stupid enough to believe it!"

"I have great sympathy but bet they never had to beg for a probe to check their child's oxygen as he used too many that month! Or fought for a nurse to give one nights respite in 2 years, just give your husband a tap on shoulder and say stop picking on the weakest that's bullying and bullies always get their comeuppance."

"Perhaps she might like to ask her husband why he is willingly and enthusiastically presiding over a Government that is doing so much to inflct wholesale pain and suffering on so many sick and disabled adults and also children, many just like her son, as a result of their savage cuts to vital welfare support and sustained attacks on our NHS?"