The answer is we're here, there, everywhere and nowhere, depending on which county you live in. 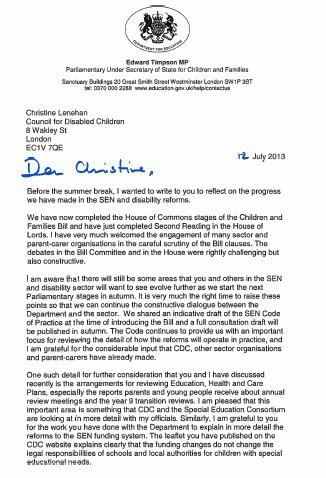 As the long summer break approaches (and enjoy it while it lasts as Mr Gove has it under his microscope - though I can think of better places for his microscope) let's take a look at where we're up to.

This is an easy exercise, as Ed Timpson, the Minister in charge, who certainly seems to be a very genuine and well-intentioned person, has written today to the Council for Disabled Children with his own round-up of the broad facts.

You can download the letter for yourself here but to summarise:

As we develop the Code of Practice, it will be important to write it in a way that supports a real improvement in outcomes for those with SEN in schools and colleges in order to meet the Department’s wider aims to improve attainment and close the gap. Ed Timpson MP, Education Minister.

All very nice (or as my SEN barrister friend Gulshanah, would say sweetly and with a ton of barely-detectable cynicism, 'That's lovely, isn't it?'

Recently, SNJ published two posts raising concerns in the bill, none of which seem to have been addressed so far. You can read the posts here and here to see the issues that remain. The letter doesn't answer these questions, with the exception of the Annual Review question which is under further consideration. To make for easier reading, we've combined them into one easy to download PDF 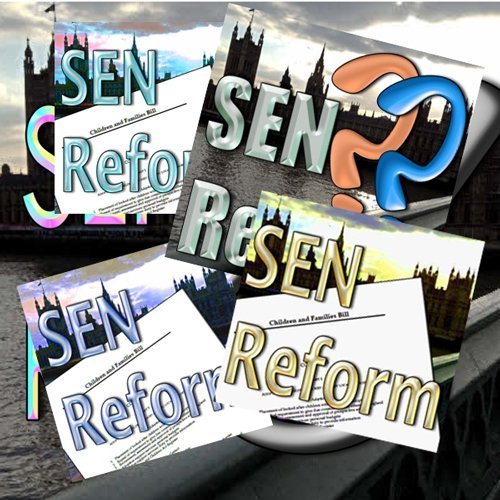 We do hope that these problems and omissions will be tackled in the autumn as the next parliamentary stages are started, as Mr Timpson says himself, "I am aware that there will still be some areas that you and others in the SEN and disability sector will want to see evolve further as we start the next Parliamentary stages in autumn. lt is very much the right time to raise these points so that we can continue the constructive dialogue between the Department and the sector."

We, and we hope, you too, will be continuing to work as much as possible on influencing the bill through the channels that we are part of. It is so important to stress that everyone concerned with the bill has an opportunity to make their voice heard. For parents, this is most likely to be through their local parent-carer forum.

For parents who have SEN children,the upcoming consultation of the Code of Practice will be a huge opportunity to have your say. This is where the rules and regulations will be written and if your child doesn't have a statement/EHCP, this is even more important. Read the draft - you don't have to do it in one go, take the whole summer to comb through it and make notes.

Your voice may be the one that makes the difference. It's easy to complain when you don't like something, much harder to do something about it so if you are in a position to, do make your voice heard.

Later this week we will be publishing the results of our survey into how much SEN/D parents and carers know about the SEN reforms. They make for startling reading. As a taster:

We need as many parents and carers to be as informed as possible, whether or not they can be or want to be involved. Local authorities, schools, colleges, children's centres need to do a better job of funnelling information through to parents about the reforms and about their local (voluntary and over-stretched) parent-carer forums.

There's no space to tell you how to do that, though as an experienced charity PR, I have plenty of ideas. I would hope every Local Authority's Comms Department do too!