It's Deaf Awareness Week and a new book has been published, written to boost deaf awareness and tackle the lack of diversity in children’s book characters.

The National Deaf Children’s Society published Alex's book after hearing from parents that it was really hard to find books with deaf characters for their children. There are more than 45,000 deaf children in the UK. The NDCS supports them and their families by providing impartial, practical and emotional support as well as campaigning for a world without barriers for deaf children and their families.

We asked Chief Executive of NDCS, Susan Daniels, to tell us more about the project. 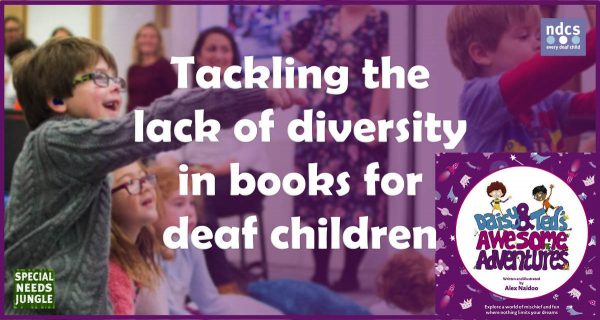 Why we published a book for deaf children by Susan Daniels

I believe characters in stories should be as diverse as the people who read them, but only a handful of children’s books feature characters with disabilities or special educational needs.

Most of the 45,000 deaf children in the UK are born to hearing parents and go to mainstream schools where they may be the only deaf child, so they can feel quite isolated.

I’m proud to be Chief Executive of the National Deaf Children’s Society, which works tirelessly to change and challenge this situation.

That’s how [amazon_textlink asin='1909706132' text='Daisy and Ted’s Awesome Adventures' template='ProductLink' store='specialndsjungl-21' marketplace='UK' link_id='58a990d0-3723-11e7-b6ff-137bf3e1d63b'] came about. It’s a brilliant little book by Alex Naidoo, that follows a deaf girl and her hearing friend as they travel through time and space, meeting everyone from monsters and magicians to dragons and dinosaurs.

Having been deaf from the age of four, I would have loved to have a book like this when I was growing up. In all the stories that I read, there was never a character quite like me.

Regrettably, I no longer fit into the age bracket of the book’s target audience, so feedback from Surrey Deaf Children’s Society and Whitehall Primary School in Chingford was invaluable in this project. Who better to advise on what makes a great book than the children you want to read it? Their thoughts and ideas helped to shape the storyline and illustrations, so that even before the book was published we knew it had a stamp of approval from deaf and hearing children.

Naeem Ghani, whose deaf six-year-old daughters were consulted on the book, said: “It’s great for the girls to see someone like themselves in a story; it encourages them and reassures them, as Daisy’s deafness creates some challenges but she always overcomes them. There should definitely be more books with deaf characters because we haven’t found anything else like this. It’s helpful for hearing children too, and even parents, to make them more aware and understanding.”

As a deaf mother with two hearing daughters, I have to agree with Naeem. I would love to have been able to read this to my girls when they were little - it would have been a great way of showing them how to communicate well with me, my partner and our deaf friends.

About the character, Daisy

Daisy always finds a creative solution for tackling challenges, for example, using sign language on board a noisy pirate ship and asking aliens to tuck their tentacles away from their mouths when talking so that she can lip-read!

Gruffalo author Julia Donaldson made it her mission as Children’s Laureate (2011-13) to promote stories for and about deaf children. She worked with the Life & Deaf Association to create What the Jackdaw Saw, a picture book about a hearing bird meeting deaf animals and learning to communicate with them. When we told her about Daisy and Ted, she said, “It’s great to see a fun, entertaining picture book which will help to raise awareness of deafness and inspire self-confidence in deaf children.”

Like Julia, I have a lot of ambitions for Daisy and Ted’s Awesome Adventures. I hope it gets hearing children to think about what deafness might be like and opens their eyes to different ways of communicating, so that if they meet someone who’s deaf they’ll find it easier to involve them.

I hope that when deaf children see a character like themselves in a book, it helps them to feel included and understood, and encourages them to dream big and show the world they can do anything their hearing friends can.

I don’t think my ambitions are unrealistic. The book became a best seller on Amazon in its first week on sale and we’ve had some really brilliant feedback on social media from children and parents alike.

Storytelling is a very powerful thing, and I truly believe this book can make a real difference – but ultimately, it’s a fun adventure story for children to enjoy whether they are deaf or hearing.

You can find out more at ndcs.org.uk/awesomeadventures and the [amazon_textlink asin='1909706132' text='book is on sale on Amazon.' template='ProductLink' store='specialndsjungl-21' marketplace='UK' link_id='c34f8bce-3724-11e7-accf-833d17124f16'] All money raised through book sales will help the National Deaf Children’s Society to create a world without barriers for every deaf child.