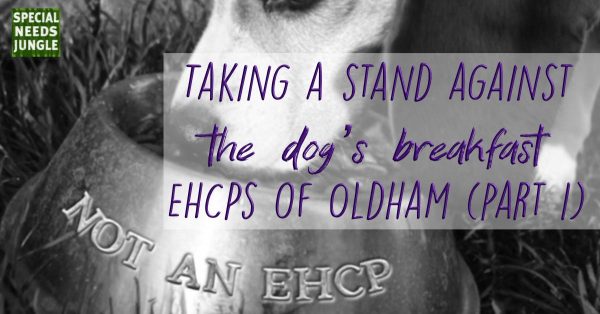 I’ve seen a fair few EHC Plans now – those of the pupils at Bright Futures School (BFS), those of children whose parents are seeking a place for them at BFS, and those of children whose parents who seek me out for help, usually via word of mouth through other parents. The majority of the Plans are from my authority, Oldham, but I have seen several Plans from neighbouring authorities.

I honestly haven’t seen one EHC Plan across all these authorities that isn’t a dog’s breakfast. As far as Oldham is concerned, this is no surprise when you take into account the findings from the recent SEND Ofsted/CQC inspection, which were published on 28thNovember 2017.

Following the SEN Ofsted report, I wrote to the local authority’s Head of SEN and the Children’s Commissioner in the CCG to share my own observations – from experience at the coal face – of what might lie behind some of the above criticisms in respect of provision for children with autism.

The letter went on to give specific examples, derived from real life EHCPs that illustrated the above points. There were 13 appendices and it took me a long time to put all that information together. I knew it was a mistake to invest my time and energy in it even whilst I was writing it but I couldn’t leave it alone. There is still a (naïve, foolish, hopelessly optimistic) part of me that thinks that service providers will do the right thing if they are told the truth.

So, I am now writing a series of complaint letters that will eventually (I predict) end up in the hands of the Health Service and/or Local Authority Ombudsman. Because there’s no point mucking about, is there? Co-bloody-production, my arse. Just call the poor practice out for what it is, challenge it and send it up the line through the complaints (and possibly, judicial review) process asap.

And challenging via SEN tribunals…..in that arena, heavily weighted against parents or the young person (age 16+) themselves when the local authority can use public money to employ a barrister and the parent/young person has no legal representation because they can’t afford it…..my experience of seeking provision to address the core difficulties at the heart of autism is that common sense does not prevail and the law is an ass.

In the next instalment on Friday, I share one example of what I’ve done to call the poor provision out. The information is actual information from a real EHCP but the name of the young person has been changed and other names anonymised. The EHCP belongs to a 15-year-old young man who is not a pupil at BFS, who has recently been diagnosed with autism, and who has some very serious mental health difficulties.