Self-harm. It's something that many find hard to understand. Why would you intentionally hurt yourself?

When we hear about it, it's usually in relation to young people, most often girls. But self-harm or self-injury is not just confined to teenage girls, nor even to young people. It's usually seen as a coping mechanism, often related to issues around control and anxiety. Not just self-control, but feeling in control of your own life. Self-loathing is in there too. 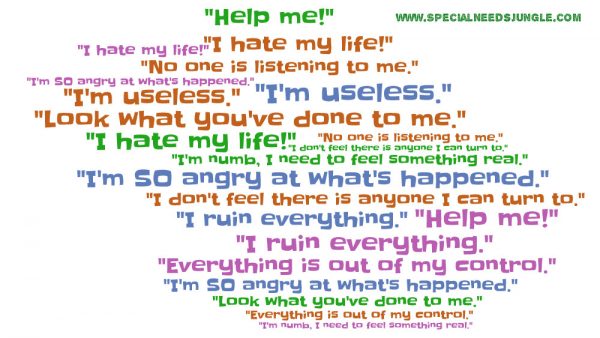 It can happen to people in what seem to be the most secure, loving homes because it can be nothing to do with the other people in the house and everything about how the person involved feels about themself. Imagine needing to scream and scream and scream until you are hoarse and that still not being enough to relieve the inner turmoil you feel.

While self-harm is not a mental illness in itself, it is often the visual sign of other issues such as abuse, eating disorders or emotional, depressive or personality disorders. In young people it can stem from not understanding their own emotional process; you hate yourself but don't know why or how to process the feelings.

Self-Harm Awareness Day is on March 1st. We're doing this post a few days ahead to give you time to find out about it and read up so that you can use the day to raise awareness or perhaps as a way to start a conversation if you suspect that you might need to, but aren't sure how.

Young Minds estimates that one in twelve young people in the UK have self-harmed at some point in their lives. And the latest figures show that in the last two years alone ChildLine has seen an increase in counselling sessions of 167% on the issue with evidence that self-harming is affecting children at a younger age than ever before.

Self-harm is also not just about cutting. It can be about abusing drugs (whether prescription or recreational) or alcohol. The most scary thing is that you may speak to that person (of whatever age) every day and never notice that anything is wrong.

How to help someone who is self-harming

So as a parent, how do you spot the signs and what can you do about it without making matters worse? Your natural reaction is to be horrified and distressed, especially if you find out by seeing scratches or scars and you will of course, want to tell them to stop - right now. Let's face it, that's unlikely to work and if they've summoned the courage to tell you it was undoubtedly really difficult for them to do.

As I mentioned earlier, the person who is self-harming isn't always a teenager. Adults can just as easily be affected and they may also feel additional shame that they are doing this at the age they are. It may not be cutting - or not only cutting. They may be using alcohol or drugs or a combination in a deliberate way to harm themselves but you haven't understood that this is what is happening. Life Signs has a case study of adult self-harm, some advice and a personal account.

If you have read this and are imminent danger of hurting yourself, please seek help by calling