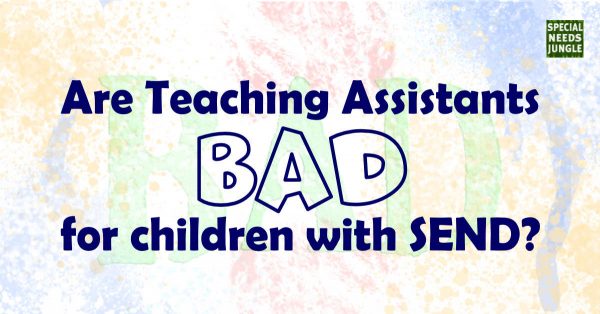 I often hear that, "Research says that Teaching Assistants (TAs) are bad for children, so we don’t do them here" in response to parental queries regarding support at school. The research cited comes from a large 2009 study, the Deployment and Impact of Support Staff (DISS) Project.

However, the SEND Code of Practice (9.69) states: ‘Provision must be detailed and specific and should normally be quantified, for example, in terms of the type, hours and frequency of support and level of expertise...’, so it could seem that there is a conflict going on. Hopefully, I’m going to set the record straight as to what research actually said & how this sits with legal duties.

There is actually no conflict between the DISS study (see below) and quantifying statutory Education Health and Care plans (EHCPs), but they really need to be quantified by quality support, not just overall ‘hours’ without consideration of the rest of the detail needed as stated in the SEND CoP 9.69. Some pupils will need high levels or constant 1:1 support, but many pupils can be explicitly taught how to experience and develop independent learning skills. Removing a TA before the skills required have been mastered would be akin to removing a plaster cast before a broken bone has healed. The trick is to ensure that the person performing the fracture reduction has the right training to do so.

During 2003-2009 a large study, The Deployment and Impact of Support Staff (DISS) Project was conducted into the role of TAs. Nearly 18,000 questionnaire responses from school leaders, support staff and teachers were analysed covering 8,200 pupils from two cohorts. There were two broad aims:

For many of us, including the government & schools, we believed that TAs (I use the term to cover all support staff who assist with teaching) were key to inclusion and pupil progress. The wording in the SENCoP (9.69) stems from case law, where the Judge ruled:

“In very many cases it will not be possible to fulfil the requirement to specify the special educational provision considered appropriate to meet the child’s needs, including specification of staffing arrangements and curriculum, unless hours per week are set out.”  (L v Clarke & Somerset (1997))

Sadly, TA ‘hours’ became the currency of statements of Special Educational Needs (now Education, Health & Care plans – EHCPs), rather than specific, quality interventions which were quantified. Statements & EHC plans continue to be non-committal regarding interventions, with LAs often claiming they cannot write anything in unless recommended by a commissioned professional.

"Removing a TA before the skills required have been mastered would be akin to removing a plaster cast before a broken bone has healed."
The analysis of the responses in the DISS study were not as expected. There was a mismatch between the positive views of teachers about the impact of TAs on pupils’ academic progress and actual progress. In fact, for many of these pupils, progress was negative. The pupils receiving the most TA support made less progress than those with little or no support, after controlling for factors such as prior attainment and SEN. This is led to the call by some to say, ‘TAs are bad’. However, it is not sufficient to simply tot up the figures, as jumping to conclusions without further analysis is also bad!

Not the fault of the TA!

The researchers found a number of reasons behind why pupils were not making progress and are at great pains to make it clear that TAs themselves are not at fault. In fact, they went as far as stating that schools would not be able to function without them. The problem lies in schools’ Senior Leadership Team (SLT) – how TAs are trained and deployed.

Many TAs were going into lessons ‘blind’, with no real training on how to support the pupil and/or with little prior contact with the teacher to discuss the lesson and its objectives. Those of us who have taught on supply will tell you that this is never a good thing. Walking into a class, not knowing what you will be teaching and picking up the lesson plan and delivering it without time to process it is no easy task, especially if you know nothing about the subject. To expect a TA to decipher a lesson as it is being delivered, then break it down for the pupil requires an understanding not only of the content and lesson objectives but also how the child learns. How well can I teach German if I don’t speak it?

Another issue was the fear that if a pupil did not complete their work in class, they would be kept in during break. TAs tended to step in too quickly and ‘give’ answers rather than pausing or questioning what the pupil might already know. There was an element of feeling responsible for pupils experiencing success and not wishing to let them down. Again, this is a failure of SLT to provide training rather than a failing by the TA. We parents also often do things for our children that they could do for themselves, simply to save time, like sewing name labels onto school clothes. We can’t ‘blame’ untrained TAs for doing the same. Some children in the study were happy to let ‘their’ TA do their work for them. Who wouldn’t? If my housework got done for me because I sat down, I’d sit down more often!

The more ‘support’ the pupil had, the further a pupil dropped back and the less contact they had with their teacher. If TAs are already distanced from the teacher, it becomes easy to see why many children failed to learn. Although some schools have excellent TA training, it cannot be suggested that all are the same. However, there are significant inconsistencies between schools – and sometimes within schools too.

Various pieces of research shows that pupils generally make progress via TA-led interventions, but progress with in-class TAs proves more problematic. The ‘intervention’ TA generally had training and experience in delivering programmes such as ELKLAN (speech and language training) or ran small literacy and numeracy groups, so they did not suffer ‘going in blind’ like pupil-specific TAs. Again, it must be stressed that it is not the fault of the TA, it is the fault of the SLT. The school’s Governors also have a duty to use their best endeavours to secure any SEN provision required by its pupils.

The precursor to the SEND reforms, The Lamb Inquiry (2009), called for training for LA officers to address the issue of spending too much time assessing and providing easily quantifiable services, rather than keeping sight of those most effective at delivering improved outcomes. The Education Endowment Foundation (EEF) is, to a certain extent, seeking to plug that gap by reviewing and rating a range of known interventions. One of the most effective learning ‘tools’ is teaching for the development of metacognition (thinking about thinking), which creates quite a big problem if pupil’s work has been made too easy, or the TA has not been trained to provide a graduated response to the assertion ‘I’m stuck!’. How is ‘thought’ being built on?

A pupil is issued with an EHCP because they require support that is ‘additional to, or different from, that made generally for others of the same age in [mainstream]’ (Children & Families Act s21), so the LA must detail this in line with SENCoP 9.69. The DISS study highlighted the importance of quality training and evidence-based practices. While schools should develop their own expertise, it is for the local authority (LA) to identify interventions through the EHC Needs Assessment and subsequent Annual Reviews and write them into the plan. Yet, the majority of EHC plans I have seen consist of vague ‘interventions’ such as: ‘Would benefit from…’, ‘Opportunities for…’, or ‘Regular access to…’

There is no mention of who, what, when, how long for etc. Often, the wording precedes nothing more than what would be expected in any classroom anyway. It is also important that interventions are carried out in accordance with their protocols. If it states weekly, it should be weekly. If it states groups of no more than four, you do not deliver to a group of five.

Similar wording would be appropriate for a TA delivering a specific intervention: amount, group size, frequency, who & experience/qualification.

It is important, therefore, not to think of an EHC plan in just terms of ‘hours’, but in staff training and quality interventions. Schools must publish in their SEN Information report “Information about the expertise and training of staff in relation to children and young people with special educational needs and about how specialist expertise will be secured” (SEN Reg 51/Schedule 1(5)). A parent should not have to feel uncomfortable when questioning – and schools should not feel threatened by being questioned!

For TAs to do their jobs well they need their school to invest in them. For improved pupil outcomes, parents need to question the LA as to what interventions their child requires and the level of training of TAs delivering them. High-quality and consistent whole-school approach to SEND will improve outcomes for all.

Links in this article: