Mental health in adolescents with or without special needs is a growing concern and a particular interest of mine.

I found an article on MedPage Today about a survey of teens who had been treated for suicidal thoughts and mental health problems that indicates they are still at risk of attempting suicide. This, to me, says that  just because you have sought help for your young person in this situation, you can never afford to think the problem has gone away. 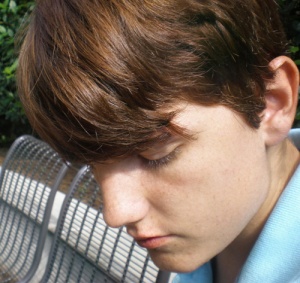 Parenting teens is, in so many ways, much more difficult than parenting younger children. A balance must be found between watchfulness and intrusion. They naturally do not want to share their inner thoughts with their parents and keep so much more to themselves. They often think that they should be able to sort out emotional problems for themselves, when they are in no position to do so alone.

At a time when most parents are letting go, for young people like these, a parent paying less attention to them is the last thing they really need. It is 'parenting by stealth'. Even then, I know even a vigilant parent cannot always prevent a possible suicide attempt.

It is a very disturbing study and just illustrates the importance and necessity of a well-functioning CAMHS service, something that is often not the case in many areas at present. I also believe that schools should have ready access to mental health advisors or counsellors and mentors for secondary students, whether they are diagnosed with a condition or not.

If it is not already the case, teachers should receive training in recognising the emerging signs of mental health issues in teenagers so that they can alert those in a position to help. With so much more pressure on young people in the modern world, it is the duty of adults to ensure that they are well-prepared to cope with it.

I can almost hear the older generation say, 'it wasn't like this in my day,' and that would be true. But the world is a rapidly changing place and the way we raise our children must evolve to meet the challenges they face.

Part of the article is reproduced below with a link to the rest on the MedPage site at the bottom.

Though most suicidal teens have received some form of mental health treatment, many of them still plan or attempt to kill themselves, researchers found.

More than 12% of teens experience suicidal ideation and 80% of those have received some form of treatment, but around 4% of teens have made a plan to kill themselves and 4% have attempted to commit suicide, according to Matthew Nock, PhD, of Harvard University, and colleagues. In most cases (>55%), treatment starts prior to onset of suicidal behaviors but fails to prevent these behaviors from occurring, they noted.

Teens with certain distress, disruptive behavior, and substance abuse disorders were more likely to have a suicide plan, or to attempt planned or unplanned suicide, than they were to experience suicidal ideation, they wrote online in JAMA Psychiatry.

The study analyzed data from 6,482 teens ages 13 to 18, and their parents. The adolescents were interviewed face-to-face to determine the prevalence of suicidal behaviors, including suicidal ideation, planning, and attempts. Parents completed written surveys asking about their adolescent's mental health.

Adolescents also were interviewed for presence of mental health disorders, which were divided into four broad categories and further broken down into a number of subcategories, including:

Researchers also gathered data from both teens and parents on whether teens had received treatment for emotional or behavioral problems and what type of service was administered, such as mental health treatment, medical services, and school services.

Over one-third of teens with suicidal ideation went on to develop a suicide plan (33.4%) or attempt a planned or unplanned suicide (33.9%); participants with a plan were nearly three times as likely to make an attempt as those without one (60.8% versus 20.4%), the researchers found.