It’s easy to assume that the moral dilemma of whether to abort your unborn baby that you've learned has a disability, is confined to a shouty debate between pro-choicers on the right to end a pregnancy at any stage, for any reason, and equally vociferous pro-lifers camped outside abortion clinics with their gory billboard campaigns designed to shock and scare.

But when it directly affects you, when you live through what all the spin really means, when your heart has ached with confusion, then those angry conflicting arguments become nothing more than so much white noise.

As with all complicated moral and emotional issues, the reality, the experiences and beliefs of the masses, the experience of the common woman, lies somewhere in the vast stretch of thinking that falls between the two peaks. And yes, it's complicated.

I feel qualified to add my personal comments to this topic because, when pregnant with our second child I too clearly recall my fear of ‘imperfection’ of any ‘less than healthy’ foetus.

I naïvely opted for initial screening - which was clear - for ‘peace of mind’, arrogantly certain that all would be well. I refused more invasive amniocentesis for fear of the risks ‘to a healthy baby’, following five miscarriages. I declared that I didn’t mind the sex of the baby ‘as long as it was healthy’. I also clearly recall a conversation about definitely not thinking I could cope with a child with Down’s syndrome. Termination was on the agenda for discussion for us at that point.

My choice of words back then echoed those that trip so easily and unthinkingly from almost every prospective mother’s tongue. They imply that a healthy baby’s life is naturally worth more than one with medical complications, worse still, one who may simply look or learn or live a little differently. That pregnancy is conditional on an all-clear result at a 20 week scan, until which point we traditionally keep it under wraps.

Natalia was born at home, silent and blue, the dash to the Neonatal Intensive Care unit revealing a diagnosis of Down’s syndrome, along with two small holes in her heart. The words punched through my soul. The bottom of my world dropped from beneath me and dark fear, worry and shock rushed in; I hadn’t signed up for this! Why me?

But seven years on, having walked the path I was so adamant that I didn’t want to take, I now know why me. 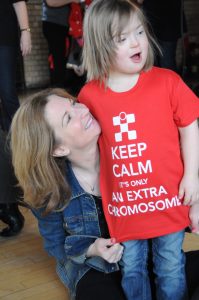 For me, the realities of Down’s syndrome today are of the independence that is possible and the huge benefits that we all reap from being inclusive and accepting different ways of living. Most of all it is understanding what those with learning disabilities contribute huge amounts to their communities.

Natalia is simply our daughter, a cake lover, swimming addict and annoying little sister. Our lived reality doesn’t even begin to overlap the stereotyped image that my ignorant subconscious created before, from all the outdated glimpses into the lives of adults with the condition when I was a child.

Moreover, having analysed the root of my early feelings I see with absolute clarity the disability lie that we are all spoon fed and fear a somewhat sinister and subtle guiding of women by medical professionals to terminate. How could I have made a decision back then, based on what I thought I knew, but was utterly ignorant of?

I was then and still am pro-choice, but today, knowing what I now know, would I terminate a much wanted baby because they had an extra chromosome? Absolutely not.

We shudder as a civilised society at the thought of past atrocities in eugenics and ethnic cleansing. But of course the Nazis began with those with disabilities. Those acts were evil genocide, yet terminating disabled foetuses happens every day, slowly eradicating one particular group of people from society in a way that we barely notice. We are making decisions about which lives are and aren’t worth living based on what we think it might be like to have or live with a particular disability.

We pride ourselves on our equality laws, those that give each individual the same rights, whatever their gender, ethnicity, sexuality or disability. Yet we are shouting loud and clear to adults with disabilities that they are worth a little bit less with our abortion laws.

The cut off point for an abortion is 24 weeks, unless the baby has a ‘severe handicap’. (Awful, outdated language I know, but then it is an outdated law.) Then it is legal to terminate that pregnancy up to and including during birth at 40 weeks. There is no definition of ‘severe handicap’ at all and it is very much down to each doctor’s discretion.

Babies with Down’s syndrome, talipes and cleft lip and palate do end up in the stastics that make up these late abortions, ie those with a mild to moderate developmental delay or superficial physical problems. Hardly attributes that render them ‘not compatible with life’. Now that is an uncomfortable truth if ever I stumbled across one.

Partly I can only assume this comes down to the perceived cost of an individual, how many "Quality Life Years" they can be expected to have (that is an actual measurement used) and our collective internalised fear of disability and the view that it is a burden to us all. But the reality is that disability is a normal part of life, furthermore, one that we are all one accident or illness away from.

Let’s examine the example of Down's syndrome. 92% of all women who receive an antenatal diagnosis of DS opt for an abortion, (not all women agree to the standard tests however), a further 2% of babies will be miscarried, leaving an approximate live birth figure of 6%.

We all know what happens in societies where womens’ rights to end an unwanted pregnancy are removed. But being pro-choice does not always mean choosing an abortion. The whole point of choice is deciding to take one of at least two paths.

The right to truly choose is being able to make an informed decision based on unbiased facts, within a support network. If that was the case, I hazard a rough guestimate that around 50% of women might choose to abort a baby they might feel unable to cope with. But when we trust our doctors implicitly, and those doctors are ‘sorry’, telling us the ‘bad news’ of ‘chromosomal anomalies/abnormalities’, that our baby has ‘tested positive’ for this or that, and when an abortion is the advised and assumed only option, then the choices we feel are our own are perhaps the result of a subliminal message.

Time and again women are being left unsupported at every step of the process. Before and during testing and screening, while waiting for results is a particularly stressful time, not to mention after the results arrive and whether they choose to terminate or keep their baby with a disability.

Of the years I have been writing DownsSideUp I have spoken to only a couple of women whose experiences were positive, where they felt supported, because they had an understanding midwife and consultant. The vast majority report quite the reverse.

Those who choose to continue a pregnancy of a baby with Trisomy 21 are often treated with less respect than those who opt for a termination. Their maternity care changes, for example:

“I was repeatedly told that a termination could still be arranged at every scan. Eventually I asked them to write on my notes not to ask again.”

“We were treated like naughty school children when we made the decision to continue the pregnancy.”

“My consultant said he could no longer care for me if I continued with the pregnancy.”

“We were given 2 leaflets, one on amnio, the other on termination.”

“My midwife said there was a slot for a termination the next morning.”

“I had a termination as the baby had Down’s syndrome. I will refuse testing next time.”

“The (male) consultant told me my marriage would be over if I continued with the pregnancy.”

Is the choice that women have fought for actually being removed from under their noses, without them realising? Is the choice to continue a pregnancy with a baby that doesn’t fit the ‘Gold Standards’ of the ‘Decision Planning Strategy for Screening’ being taken from us? Have we got our eyes on the wrong ball?

Every woman in the land should be jumping up and down whatever their beliefs or whether they consider themselves a 'feminist' or not. For me, feminism is not assuming that abortion is the only, right way for every individual. Feminism is supporting all women, with advice, information, counselling and really championing their choices. It is understanding each other’s lifestyles, views, beliefs, differences and helping each other in this bloody tough world, not adding to each other’s strife. 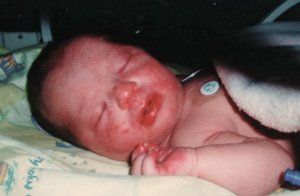 The wider moral issue for me is this: How do I explain to my daughter, when she is a grown woman herself, why there are so few adults around her with DS? How do I explain the excited newspaper headlines that hail the new sensitive tests as enabling their eradication. How do I make her believe that her voice counts the same as any other woman’s, that her life is worth every bit the same as the next? How do I make society see that she has the same rights to work, a relationship, hobbies. loves and vices as the rest of us? That she is not cute, not simply a 2 dimensional musical and loving caricature, that she is never a burden, that she gives back more than she takes, that she is a fully rounded woman.

How will I do all of that when the words and actions of so many unthinkingly assume that she is not?