The National Autistic Society has published a fairly damning report saying that less than a quarter of parents surveyed are satisfied with new special educational needs system.

The NAS is calling on government to completely review the system’s implementation, claiming that a year on parents of children on the autism spectrum are facing exhausting and highly stressful battles to get the right support with the reforms let down by poor implementation.

At SNJ we can completely back this up, not only from many, many contacts and comments we have read on our site and social media channels but also from our own experience. Later this week I have a meeting myself with senior officials from my LA as I am still not in possession of a satisfactory final EHCP for either of my sons. (I have been sent a hurriedly signed off version a few days ago, but with my sons' health needs not provisioned, it can most certainly not said to be final. I won’t write any more about this pending the meeting, which I am sure you can understand, but to be quite honest, I don’t know whether to cry or just explode outraged venom all over anyone responsible, if I can find them. However, (there's ALWAYS a however) succumbing to either of those emotions is not helpful, so I will continue to point out issues in a polite, if pointed, manner until the day the system works as we want it to, which is definitely not how it is at the moment.

As my sons are both starting new courses at college today, I have not waited for an EHCP. I have instead been into college to meet with their respective tutor teams and their extremely engaged Learning Support to go through things to watch out for and how best they can be helped. Everyone has been hugely receptive, determined to do their best for the boys and to work with me as part of the team, even though the boys are over 16. Cos, y’know, their needs don’t just magically stop at 16 and they haven't, contrary to LA opinions, suddenly become capable of managing their own educational organisation. Nothing, in reality, changes, but the number. 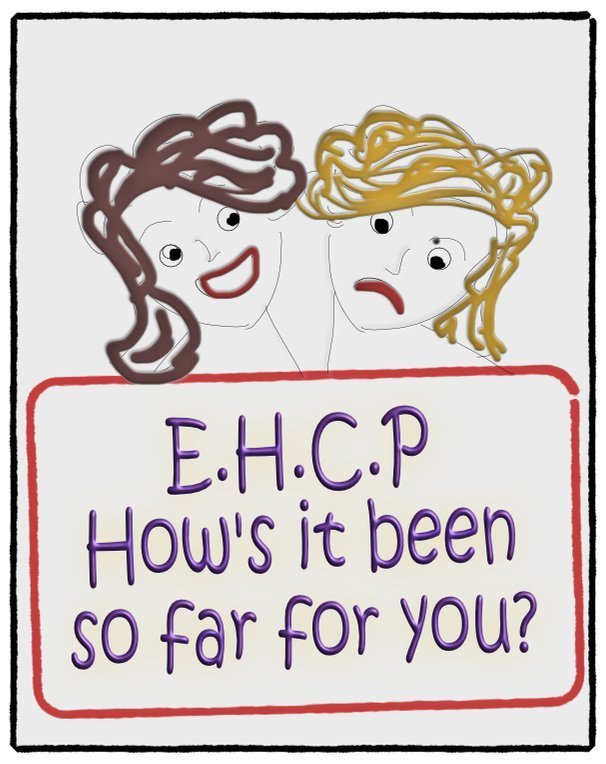 The NAS has called on the Government to carry out a systematic review of local authorities’ implementation of the new SEN system and to consider whether the timeframe for changeover to the new system needs to be extended. It’s already been extended for changeovers from statements, but any fool could see that cutting six weeks off the previous system’s timescale and adding in two more large elements of health and social care just wasn’t going to work. It’s not the bloody Tardis, after all.

It's also important that we understand what's actually in the legislation so we can tell if the LA is playing by the rules. Whatever they might like, LAs don’t get to make up their own take on legal processes. All that matters is what’s written in the Children and Families' Act and its meat, the SEND Code of Practice and its regulations.

The NAS’ survey of 1,431 parents and carers of children and young people on the autism spectrum in June and July 2015 found:

This survey was, of course, confined to children on the spectrum but it is no different for any other child with additional needs. Thank goodness the NAS has the money and staff to carry out such an analysis. As an unfunded non-profit (aka jumped up blog with big ambitions), we carried out our own snapshot mini-poll on the anniversary of the reforms.

But the Government itself has recognised there have been some challenges in implementation, extending statutory time limits for transfers from statements and issuing new implementation guidance.

The NAS analysed that government figures** also suggest that parents are finding it harder to get statutory support under the new system, with the number of statements and EHC plans issued in 2014 actually lower than in previous years. 15% of children and young people whose existing statement was reviewed in 2014 as part of the transfer to the new system did not receive an EHC Plan.

"The new SEN system isn’t yet delivering the high quality education that every child deserves. Far too many parents are still having to fight tooth and nail for the right support for their children, often facing long and incredibly stressful delays. Every day a child spends without the right education reduces their potential to succeed in life and become part of a strong and diverse UK workforce.

“If the Government is serious about its commitment to halving the disability employment gap it needs to start in schools. We want the Government to conduct a systematic review of local authorities’ implementation of the new system and to take any necessary action to make sure families are listened to and children receive support within a reasonable time."   Mark Lever, Chief Executive of the National Autistic Society.

The NAS recommended that:

You can download the whole report here.
SNJ: There are many other resources aimed at professionals such as the TES, Optimus Education, IPSEA, Nasen, SEN Magazine and SEN Leader Magazine.

What do parents say?

Below are some quotes from parents to give you a flavour of responses we've had. If you would like to add yours, please do so in the comments or email us your longer story using the form.

"The new SEN system has the potential to transform the prospects of a generation of children and young people on the spectrum. It's too important for the Government not to get it right."

"I think in principle EHC Plans are a vast improvement on statements - certainly with regard to the overlap between education and social care, and the new duty on LAs to seek the best possible outcomes for a child or young person - but there are some serious issues with the needs assessment process.
I work for IPSEA so know my way around the system, yet my son's transition from a statement is still incomplete after 7 months because the NHS have refused to undertake new SLT and OT assessments. This is despite their long term involvement with my son, and their legal duty to comply with LA requests for reports or assessments.
My LA have been very supportive throughout but are now pushing to issue the draft Plan, which I refuse to consider without a completed needs assessment. The ball is now back in the LA's court..."

"This whole process is so stressful and no one seems to know what they are doing. My child's statement was a good one written through tribunal., now going through the process to convert( not by choice!!) and its absolute chaos. Fed up of being told that at 18 it will be nothing to do with me. I am allowed an opinion but if 'they ' don't agree it will come down to best interest....... And I'm sure that will be THEIR best interest not the vulnerable adults!!!! It feels a very frightening time to be the parent of a post 16 young person with SEN. It was bad enough before. It's a licence for authorities to do what they want and after 16 years of it having to start all over again is just unbearable. Could quite frankly walk away..."

"The secondary school appear to have little clue of what the EHCP conversion process involves and have not viewed this as an assessment process for pupils. As a parent I have taken the lead on my child's conversion including contacting the Educational Psychologist for a new assessment."

Next month, we're visiting the DfE. If you want us to hand them your experiences of the EHCP system so far, please send them to us.

We want to know whether your experience has been good, bad or indifferent. It would also be good if you could add some comments about how things could have been improved in your opinion – this is the ONLY way we can help to improve things – by raising issues, flagging up good practice and getting involved. We are here to publish your views, either with your name, a pseudonym or anonymously. Use the form below.

Are you an LA representative or a teacher or other practitioner? Have you had a positive response to your implementation that we aren't seeing? Tell us about it so we can build up a bank of Good Practice that parents can see and present to their own LAs/schools etc. You can have a wider positive influence by sharing your experiences. After all, sharing is caring! Use the form below

**Department for Education (2015) Statements of SEN and EHC plans.

Add your experiences here. Tip: Copy what you've written to your clipboard before sending in case there's a priblem - this way you won't lose anything you've written