I've long had an interest in the use of alternative therapies and took Youngest to see a Bowen Therapist when he was just six weeks old and his clicky hip had not stabilised in the 'usual' time frame. Of course we now know that the cause of the dysplasia was Ehlers Danlos syndrome - a collagen fault that causes stretchy tissues - and so it was no wonder that it had not progressed as the paediatrician expected, but his only contribution was more of the same plastic splint and I wanted to explore something else.

So when I was contacted recently about using reflexology to help children with disabilities, my interest was sparked. Therapist, Lorraine Senior has developed a technique that isn't a 'standard' approach but an inventive new method, called Functional Reflex Therapy. FRT is being successfully delivered as a valuable timetabled therapy in schools, giving children with special educational needs the opportunity to continue to benefit from the calming effects of Reflexology during the school day, with the intention to support their general well being and help them to prepare for ongoing activities.

Lorraine has written for us about her technique and, I hope, will write in the future more about holistic therapies for helping our children.

I would like to share with you my reflexology therapy approach. My name is Lorraine Senior; I am a teacher with over twenty years’ experience and a qualified reflexologist. I would say that it is my extensive background of working with children with autism, ASD, neurological impairment, learning difficulties and complex health needs and their family’s combined with my experience as a qualified Reflexologist that helped me to create a simple but effective approach drawn from original reflexology theory and practice.

The approach uses non-invasive, safe and simple relaxation techniques involving the hand and foot delivered in a repetitive flowing routine that support the idea of Reflexology. The aim of the therapy is to induce relaxation, improve mood, relieve tension, and encourage social interaction, increase receptiveness and support individual well being. Providing reflexology therapy on a regular basis using FRT Approach has been seen to alleviate the stress and tension particularly in the moment and observation, reflection and evaluation by therapist and staff is ongoing with its continued and increasing use and development in school.

A key feature of the FRT approach is that it includes a special toolkit – a kit bag sporting an easily recognised logo in which to store specific FRT resources. For receivers it is significant as an object of reference and encourages them to take responsibility and prepare for their session, thus enhancing communication and reducing anxiety. It is this holistic framework that makes FRT unique and different to any known reflexology treatment that is already being provided in the education system.

But it is not only the children who benefit. As the name Functional Reflex Therapy demonstrates, the therapy adds purpose and value across the board, from the individual to the class and school and, of course, parents and carers. The primary outcome is relaxation, which is beneficial to all concerned. The children and young adults experience a release of ‘feel-good’ hormones augmented through the positive touch therapy, which helps to boost general well being, may encourage them to be calmer and help them to prepare for ongoing activities. 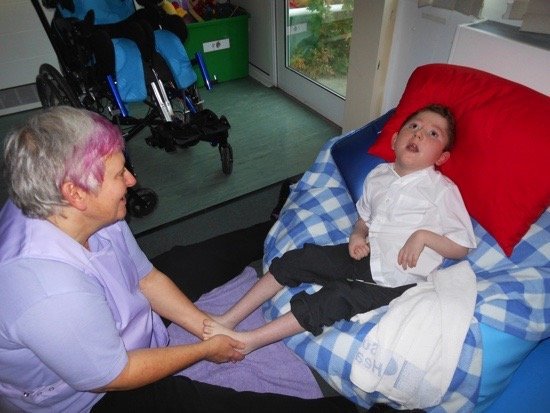 The first school to introduce this progressive technique is Harlow Fields School and Sixth Form College. I have had the privilege to work as a Reflexology Therapist there since 2011. Sue Davies, the head teacher, who is delighted with the results, gave an interview for my website blog in April 2014. She has recently taken up a head teacher position in another school but her comment on Reflexology was that, “It gives pupils a chance to relax in a deeper way than perhaps they have ever known, and experience a relationship through positive touch. I am impressed with the way pupils with the most challenging behaviours have responded, and willingly choose to attend the sessions and willingly choose to engage.”

Reflexology is already being delivered in some schools around the country by reflexologists working with the FRT Approach and I have also devised workshops which share an FRT relaxation routine with members of staff, specialist carers and parents making it more widely accessible. On completion of the workshop to understand the theory behind the techniques and to learn the routine the multidisciplinary team can then incorporate the basic FRT routine into the classroom timetable, an activity that can complement behaviour management strategies that may already be in place and be used as a way to address personal learning targets and access curriculum areas and parents and carers can enjoy offering the FRT relaxation routine at a time that is convenient for them and their child at home. It is as relaxing for the person giving as for the person receiving. Workshops are beginning to be advertised around the country, they may be in your local area, you can check on the find a therapist page on the website or for large groups of parents or for a school in-service day I am available to travel to deliver the training.

During the course of developing my concept, I have received valuable encouragement from the Association of Reflexologists - an independent professional reflexology association in the UK since 1984 - of which I am a member: They offered support by listening to my ideas and allowing me to share each stage of progress, helping me to develop the niche training course for reflexologists which enables them to develop and take their skills using the FRT approach into the education system. So I would like to thank them for continued support. The model has also been recognised by RiEN the Reflexology in Europe Network and described as “inspirational” by its chairperson, Spiros Dimitrakoulas.

I do have ambitious plans and aim to see FRT rolled out in schools across the UK and further afield. Sue Davies endorses this saying she, “would absolutely advocate that reflexology has a place on the timetable in every school in the country. Children’s mental health and well being is of paramount importance and children can only truly learn when they are in a comfortable place emotionally.” Thank you for this Sue.

So, if you feel you are a pioneering school or a parent or carer wanting to find out more and recognise the value of the intention of reflexology delivered using the FRT Approach, contact me. I look forward to the future when reflexologists will become a familiar sight, joining the ranks alongside play therapists and music therapists.