Lee Scott is a very nice man. Earlier this year, at the request of the then Education Secretary, Nicky Morgan, he criss-crossed England speaking to schools, colleges, families and local authorities to find out how they all thought the SEND reforms were going. A kind of fact-finding mission, if you will.

Then Mrs Morgan was given the old heave-ho and we wondered what would become of his inquiry. Yesterday, we got the answer as SEND Minister, Ed Timpson unveiled Mr Scott's nine-page report telling parents what we already knew and what we now hope new Education Secretary, Justine Greening, will know as well.

That it's all (or at least mostly) a bit crap. 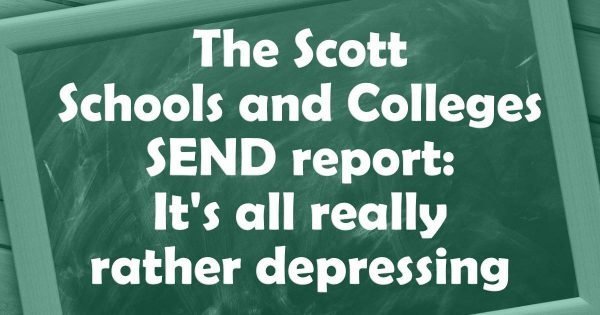 Mr Scott was a good choice as the former Prime Minister’s "Special Needs Tsar" in 2014, and he's patron on the UK Autism Foundation. During his intrepid fieldwork, he heard from more than 200 parents and young people. These included me and a delegation of parents and SNJ readers who gave our views on the reforms, particularly for the post-16 age group. We also provided him with many, many testimonies from parents sent in to us. He heard some hair-raising tales and during our meeting, he looked, at times, shocked, at what he heard.

Mr Scott chose not to mention individuals or name LAs in his narrative, which means that no one is really held to account. However, he stresses that making judgements was not his remit, rather it was to gather evidence to add to that already received not only by previous reports but by the Ofsted/CQC reports.

What did the report say?

Mr Scott, being a nice man, called it a 'mixed picture' and made a valiant attempt to highlight some areas of good practice. I do wonder if he mentioned every single good example he found in the report, whereas if he'd mentioned every example of poor practice and shoddy treatment the report would have been ten times as long.

And while we're on the subject of length, after hearing from 200 people, I'm a little surprised the report's main text covers under 10 pages, although it does make it easy to get through. It is, however, also because the issues he heard were repeated, it seems, time and again, so he has grouped them into the key themes.

"Communication works both ways – it’s not just about being nice to each other, it’s about being clear, honest, and assertive. It’s also about empathy – something that isn’t always easy to achieve, if, for example, you’ve had no personal experience of caring for a child with SEND, or if you have little understanding of the issues faced by children who are adopted and their parents." Lee Scott

"I heard often that parents or young people who pushed hardest were the ones most likely to get the support they needed. Many families don’t feel confident to do this. Some feel they will be seen as difficult, and so are scared to approach schools, colleges and local authorities. Some families report that schools and colleges are sometimes intimidating, unresponsive or inflexible – for example, putting parents off from applying to the school in the first place; taking the same approach to behavioural issues for all children (i.e., not making allowances for any SEN); and over-use of informal exclusions." Lee Scott

Mr Scott said he felt it was important that the government and other leadership agencies, continued to send out strong messages about the importance of good communication with families.

"I rarely heard any criticism made of the way the system is designed or of the role that central government is playing – although some did say that it could do more to ensure the law was being applied consistently. It seems clear to me that the legislation in place gives agencies a lot of latitude to take flexible and innovative approaches to deliver a more person-centred approach. Based on what I heard, this is happening in some areas. But it’s happening less well in others. Interpretation of the law is variable and some areas are implementing the law more fully than others." Lee Scott

The ideas Lee Scott puts forward are very much based on his key themes. Although I have abbreviated them considerably, in the report they are written more as thoughts and suggestions.

I may be wrong, but my spidey sense tells me that after hearing all these poor experiences, Mr Scott felt very gloomy and depressed at the state of play and I feel it's reflected in his report. I do feel he has captured many of the themes of the main issues well. However, I confess to feeling a little flat myself, having hoped for something that had some strong recommendations, but perhaps this was a misundertanding of Mr Scott's remit.  But it's good that he has made a big effort to gather unvarnished views and present them to the new Education Secretary.

The question is, what will she do them?

What's your view of the report? Tell us in the comments. You can find the report in full here