Last week, a group of eight parents, including me and Renata, went along to the Department of Education in London to pass on our experiences of the special educational needs reforms.

If you recall, SNJ had been asked to invite some parents for a round-table session with Lee Scott, who is leading a review of the SEND reforms for the Education Secretary, Nicky Morgan. Mr Scott is a former conservative MP and is also patron of the UK Autism Foundation.

It was a very successful meeting and every parent got to speak about their family’s experiences – and they were not good. Some parents’ poor experiences of finding special educational needs support for their children began long before the reforms and they haven’t improved since. In fact, they have often got even worse. 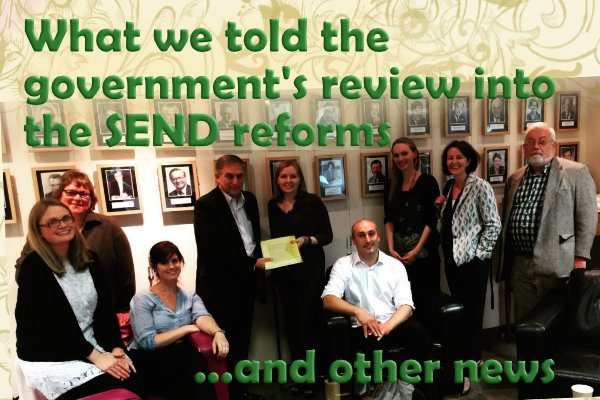 One of the parents who came along was Mel Hardcastle. She's offered her take on the meeting:

“Our meeting and the experiences shared by all seemed to point to some very clear common difficulties with the EHC reforms.

"All of our children had different special needs, were from different counties and at different levels of the process, but one thing was exactly the same: our fight to get our children the help they need for educational provision. We had all experienced a very debilitating experience trying to access provision, which had in most cases placed additional pressures on our children, our wider family and as individuals ourselves and this had been at emotional and financial cost.

"The reforms which are designed to put children and families at the heart of the process still simply isn’t working for too many of us, fundamentally because there is no accountability at the local authority.

"Lee Scott listened intently to every one of us and I feel his words were sincere in that he is equally passionate about SEN.  It would be good to hear directly back what points were directly passed to those at the higher level.

"For me, what we all seemed to be saying was that LAs, solicitors representing them and even the schools themselves need to be held accountable for their practices in relation to requests for EHCPs which supports the need for a code of conduct, as SNJ is proposing.

"However, I’m a little sad that after Baker Small Twitter-storm, councils only stopped using them because of the social media public outrage at the law firm's tactics, not because they listened to what parents have said all along. If the LAs wanted to truly follow the principles of the SEN reforms, why have they continued to allow solicitors to try to thwart parents and- until now -gone hand-in-hand with the tactics clearly designed to make it as difficult as possible for parents?

"My prevailing view is that for LAs and schools, it’s a budget management issue, not a child rights and welfare issue. Overall, however, I’m encouraged that we were very much listened to at the meeting, but as many parents as possible need to be making their voice heard to make sure change happens by blogging, supporting forums and knocking on the doors of their local MPs.

Matt Keer, parent of children who are deaf, has written for SNJ before about culture change in the SEND reforms. He was also one of the parents who came along to the DfE to speak to Lee Scott.

"It was depressing to see that so many of us were going through the same sort of struggle with the same sort of culture in local authorities, even though the new legislation has been in place for a while now. But it was encouraging to talk with Lee; he genuinely seems to 'get' how life works at the SEND coalface, and seems driven to try to improve everyone's lot.

"The same message was hammered home again and again by many of us: the legislation is fine, but without proper local accountability it won't achieve much. I don't know how far Lee's report will be able to drive change there - it's for others to take the necessary action. But I have no doubt that he'll try, if he thinks it's right."

"It shouldn't be a battle.  It should be a collaborative process."

"We need a fairer process, which doesn’t rely on a parent’s ability to proactively navigate a complex system or depend upon them sitting with a copy of the Children and Families Act and a highlighter at 2am."
Also among the parent group was Sarah Downs, mother of a child with a  undiagnosed condition.

"It was fantastic to have the opportunity to feed into the review of the SEND reforms, although disheartening to hear the stories from around the table. Despite each of us having such different circumstances, the same themes ran throughout - a lack of accountability from local authorities and the need for culture change.

"As another parent pointed out to me, our case should be relatively easy.  My son is almost five.  He has complex health needs which affect him daily.  He is a wheelchair user.  He has no form of communication. His needs clearly span health, education and social care. The policy around EHCP transition and the funding of statements in the interim is clearly laid out.

"Yet we still find ourselves struggling our way through this process, with multiple breeches of policy along the way and little means to ensure that the SEN Code of Practice is followed. There is little to challenge about my son's needs, as they are impossible to deny.  If we are facing this level of confusion, stress and anxiety, I can only imagine how it must be for families who have a more contentious battle to fight.  And it shouldn't be a battle.  It should be a collaborative process.  Yet the stories of families around the table said otherwise.

"We vitally need change within local authorities to ensure that law is not optional, families are viewed as collaborators and cases do not progress all the way to tribunal.  We need a fairer process, which doesn’t rely on a parent’s ability to proactively navigate a complex system or depend upon them sitting with a copy of the Children and Families Act and a highlighter at 2am.

The review of the SEND reforms and the SNJ campaign may just be a means to bring about the beginnings of change.  Listening to the families of older children and teenagers, I certainly hope so.  Like many parents of young children with disabilities, we are scared for the future.  I can’t help but feel it just shouldn’t be that way.

A petition is also running, highlighting one of the aims of our code of conduct – to stop local authorities using money from the SEND budget, to pay for external lawyers at the Tribunal.

The petition, organised by a group of SEND parents is entitled: "SEN budgets need to be ring-fenced for children's education not LA legal fees."

The petition already has thousands of names and if you can also sign it, please do.

Some other news from social media

Interestingly, word reaches us via social media that Mark Small has formed a new company "Essential Special Educational Needs." I have picked up that he is planning to "change sides". My stomach has turned, ever so slightly.

I would have thought a period of quiet contemplation would have been preferable. Perhaps he should be reminded that this is not supposed to be a game of two sides. We are working for a better society where 'fighting' gives way to the right thing being done just because it's the right bloody thing.

Keep sending in your ideas for an inclusive Code of Conduct

Our proposed Code of Conduct encompasses the funding issue and goes further towards making the culture change that is so badly needed, closer to a reality. We’ve been sent so many detailed responses to the preliminary proposals and also your own, additional ideas. We really need your input and backing to make this as inclusive and comprehensive as possible.

In the coming weeks, we’ll draw up a refined proposal that everyone needs to express opinions on what is actually workable. This isn’t only for parents to pitch in on, we need the views submitted of SEND professionals, local authorities and also the law firms that represent both LAs and parents as well.

At its heart, it’s just a promise to behave in an honourable, transparent and honest way that puts the child at the centre. It needs to be something that everyone, including parents, should be happy to sign.

Keep your views - or just an expression of your support - coming in. Read the outline post and send in your thoughts and support.