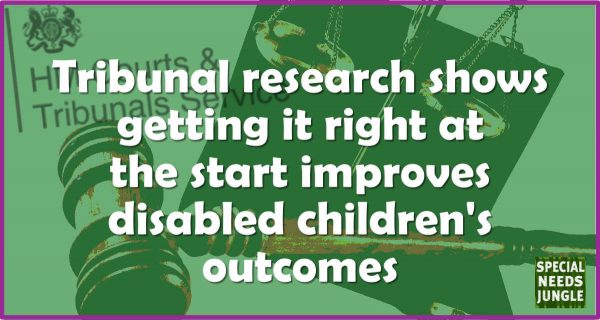 The most consistently effective way to resolve disagreements about SEND is to appeal to the Tribunal, according to the evidence contained in a complicated research report released by the DfE. 490 (94%) of the 523 appeals analysed in the research were either withdrawn or conceded or decided in favour of the appellant (the details are on p.130 of the report).

The report, comparing different routes to resolving disagreement, was released late on Wednesday together with a joint response from the Department for Education and the Ministry of Justice. The research was carried out to meet a duty placed on the Secretary of State for Education and the Lord Chancellor in the Children and Families Act 2014.

We...listened to families and stakeholders who told us they wanted a single route to raise concerns about education, health and social care in relation to EHC plans. We therefore ran, in parallel with the review, a pilot in the First-tier Tribunal SEND, whereby judges had the power to make non-binding recommendations about health and social care aspects of EHC plans, at the same time as making orders on the educational aspects.

The CEDAR review had six objectives:

This is a complex report, so we have only picked out issues relating to the points above. It includes a large amount of data from 109 participating Local Authorities and a much smaller sample of case studies. It highlights a number of general points which we know to be true:

Some context to the research

To understand the purpose of the research, we need to go back to the Lamb Inquiry of 2008, commissioned to understand what was going wrong with the special needs system that left so many parents and carers distressed and desperate. Sir Brian Lamb set out four objectives for SEND in his report, which became the foundation of the SEND reforms developed between 2012 and 2014:

Whilst the research presents many positives (for example, 90% satisfaction with the SEND Information, Advice and Support Service, SENDIASS), it calls on Local Authorities to:

However, CEDAR research highlights parent support issues on accessibility, how various roles supporting parents fit together and the impartiality of IASS.

One Tribunal panel member said, “There are a huge number of appeals that do not come to hearing. It’s simply the process in motion that focuses people’s minds and they can resolve it themselves.”

The report quotes one young person talking about the preparation for an appeal:

“What a lot of people don’t understand is, it’s not just in school hours that this will affect, it’s very much a case of 24/7. It applies an awful lot of stress on individuals which have to do the jobs [i.e. prepare the appeal case], especially my mum. The stress and the upset and everything that’s caused, because there are these bridges being burnt down, because people either can’t find the funding, or something’s gone wrong in the paperwork or something, and they’re just being picky about it and not doing it. All of that makes it extremely hard to want to help them help me and my family. Even cooperating is hard, when they’re just putting up barriers all the time. And to see it happening to my family, I get quite grumpy and quite angry when it happens. The thing that I really struggled with was staying calm when talking to members of County [at my annual review meeting] because I didn’t have time for them, because they were causing stress that my family didn’t need.” (p142)

One LA representative in a focus group said, “In this local authority, we don’t have the viewpoint where we’re against families in appeals. My viewpoint is, if we get to appeal, we’ve lost anyway because our system has failed on getting there, which I know is not that popular a view with some local authority reps.”

Another LA rep said, “My approach is anti-adversarial. […] We do not involve legal services. The SEND team do all the work. […] EP and education training is around a consultative model and talking things through. […] We talk to everyone involved and seek a resolution before [the hearing].”

At SNJ, we think this is the right approach and builds a better long-term relationship between the Authority and the family.

“Interviews with parents who had experienced a Tribunal panel hearing indicated that almost all valued the existence of the Tribunal route of redress because it allowed for independent examination of the evidence and for decisions based on the law (rather than an LA’s local policy).” (p.145)

“One Tribunal panel representative noted that the Tribunal looked at individual cases, not at wider issues: “We can see the same LA over and over again but we can’t say, ‘Stop it!’. It’s a numbers game for some LAs. For example, around refusal to assess…” (p.146)

The research found that, among the sample of parents, legal costs incurred by those who paid for legal support ranged from £280 to £55,000. On average, the study found that £12,800 could be saved in each case by avoiding going to the Tribunal (eg. by mediation and good case management).

Our view at SNJ is that the whole costs need to be considered when debating the value of the Tribunal as a means of resolving disagreements. Consider…

The report shows that mediation has its place and that the majority of decisions were reached without using one of the disagreement routes. But the First Tier Tribunal sets the benchmark for good practice in assessment and planning; and we know that the Upper Tribunal is consistently challenging the blanket policies of local authorities. If Local Authorities had to meet the costs of all Tribunals, they might review their policies and make more realistic decisions, instead of holding out until the day before the hearing and then conceding.

"The Department for Education's plans to make the pilot a two year trial is welcomed. IPSEA believes that whilst the recommendations of the Tribunal may be non-binding, there is a desperate need to encourage joint working between education, health and social care. Whilst there is no legal remedy for challenging provision made within the health and social care sections of EHCPs, the prospect of Tribunal recommendations is a step forward. This is, we feel, a step in the right direction." Comment on the report from Julie Moktadir, CEO, IPSEA

The DfE has issued a very limited comment in the research but has indicated that we may see a new Code of Practice before the end of this parliament (2019).

The independent review and the Tribunal pilot have identified good practice, and areas for development. In response, this government report sets out steps to highlight effective practice and to support the workforce, while at the same time looking at ways in which the government might further improve the SEND system...

...We are considering revising the SEND Code of Practice later this Parliament. As part of this revision, we will consider making the requirements in the Code for mediator accreditation stronger and clearer.

There are important lessons to be learned from this research and we call on the DfE to set up a commission with parents, including SNJ representatives, to shape the future of decision-making in education, health and social care.