Along with the slew of information released by the DfE last week came a very long, detailed survey of family experience of the Education, Health and Care Plan process in 2015. It was carried out, apparently, to help construct the SEND accountability framework.

And it shows, apparently, that two-thirds of parents and young people were satisfied with the overall process of getting an EHC plan... 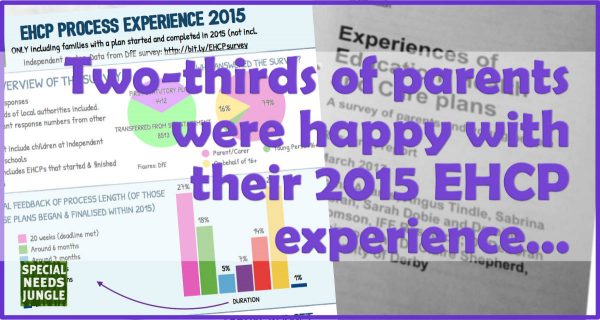 However, although it is an large piece of research, it has a major drawback: The data is ONLY based on children and young people who began and completed their EHCP journey between 1st January and 31 December 2015.

So, with this warning, let us look at what it revealed.

The DfE commissioned the University of Derby to design, pilot and roll out a national survey tool, CEDAR, that would explore the experiences of 'service users' (families) and their views on the impact of Education Health and Care (EHC) plans. The DfE also commissioned a survey of parents and young people with an EHC plan, to create a national picture of their experiences.

There were 13,643 responses with the survey exploring both positive and negative aspects of parent and young people’s experiences.

We've made an infographic at the end to help you visualise the points we're covering in this post.

As mentioned, the survey focused on children and young people with an EHC plan that had been created in the calendar year 2015. They were identified from two official databases: The National Pupil Database and the Individualised Learner Record.

65,172 children and young people were supported by an EHC plan in 2015. The data does not include children or young people attending who attend a placement under section 41(independent settings).

The parent and young people were invited to complete an online or paper questionnaire or telephone conversation. Where the young person was 16 or over they were invited to provide their responses.

Other limitations to the survey

As well as the limitations mentioned - which is not the fault of the researchers - others they acknowledge include:

Overall experience of the process

The word “process” is used to explain the whole experience of the EHC needs assessment, planning and the result of receiving an EHC plan. The survey identified the following:

Examining the questionnaire sent to the parent and young person it does not ask them specifically about the EHC assessment process. So, how can a large survey ask about experience, but not ask about the EHC assessment itself, which is a required step to obtaining a EHC plan? Did these children have proper assessments for education, health and social care, where needed? Did those transferring have new assessments or just get their statement in a new template with EHCP at the top? We don't know.

Involvement in the process

The research provides a response to the difference in figures about the timescales:

“The difference in figures may reflect parents/young people and local authorities using a different starting point when timing the 20-week period…” (p. 17, footnote 14).

There should not be a different starting point. The law makes it clear and the SEND Code of Practice 2015 provides a very clear visual which displays the timeline. If parents and young people are provided with the correct and accurate information there can be no confusion. Correspondence to parents and young people should be explicit about timescales. Are parents routinely misunderstanding when the clock starts or are LAs starting the clock at a different point and reporting different data? The research sheds no factual light on this.

An EHC plan is a plan specifying:

Did the process use the co-production model?

Co-production or, working with parents and young people, to put the plan together was one of the main tenets of the reforms. Did it happen for this cohort?

A special school I worked with in South East London developed communication aids to ensure ALL children and young people contributed in meetings. This meant their voice was heard and was included in the EHC plan and was the starting point of the journey, not a bolt on.

Awareness of information, advice and support

We've run posts in the past about IASS and Independent Supporters who are there to help parents through the process. We've also talked about the Local Offer of information.

Of course, there has to be a cut off point, but choosing a certain percentage of each LA's plans, randomly selected by computer, would give better more representative results. It wouldn't be the same kind of survey, but you would get a better snapshot.

Perceptions of the quality of the EHC plan

This section looked at the perceptions of a plan's quality, its content and how easy or difficult it was to understand. It also asked if parents and young person’s wishes were included and impact of having a plan, based on the support set out in it.

I found this part of the research lacking in content and it seemed to make everything seem woolly and unclear. The format of an EHC plan can be agreed upon by each LA but the SEND Code Practice 2015 (9.62) states the EHC plan must include sections A-K.  I have seen EHC plans that do not include all the sections or they are muddled together.

Section A of the plan usually contains the parental and young person’s views. I would expect to see this in all the EHC plans. However, if the survey had asked parents and young people about their perceptions of individual sections, e.g. Section B, the special educational needs,  Section F, the SEND provision to meet those needs and Section I, the placement, the results could have been different. This is because these sections are appealable.

According to the CEDAR review:

“Some parents had very positive experiences of the assessment process and were then disappointed by the inaccurate draft EHC plan they received. They described draft plans that did not reflect the parent’s and child/young person’s views, and that did not capture accurately the needs of the child/young person. This led to disagreements.”

It also highlighted that many parents raised concerns that some SEND case officers seemed unaware of the correct process to follow during an EHC assessment.

What does it all mean?

In conclusion, this 2015 snapshot paints the picture that parents and young people are feeling satisfied with the services they are receiving. This is of course to be welcomed. However, it's really unfortunate that by excluding those in independent settings and anyone whose 2015 plan bled over into 2014 or 2016, the data is skewed and weaker as a result.

How will this research be used?

We don't really know how this data can be used as important questions were omitted. It's a very detailed study though and we have not even covered it all here.

Nevertheless, we can hope that it will result in:

You can download a copy of the survey here: 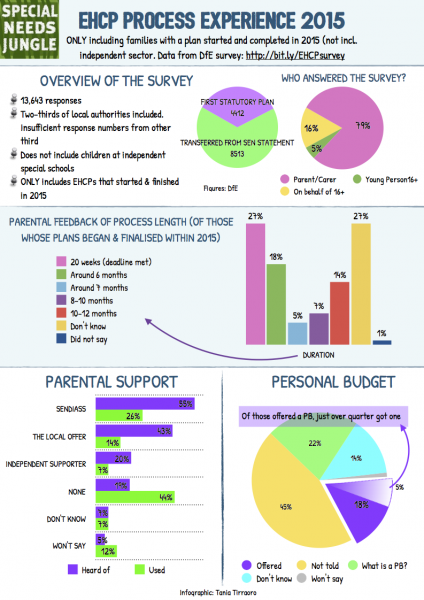 Follow me:
Marguerite Haye
Marguerite Haye joined us as a columnist toward the end of 2015. She's knowledgeable in SEND legislation and embraces its ethos at the heart of everything she does, by adopting a child-centred approach to ensure every child receives the right provision. I have been involved in teaching for over 15 years in various positions and sectors, including being Head Teacher at a Specialist School for Autistic children and young people.
Marguerite can recognise individual learning abilities and uses her initiative to tailor learning programs to meet individual need.
Through effective leadership, Marguerite promotes an appropriate culture, empowers staff and demonstrates high standards.
Marguerite has built connections with parents, young people and professionals alike in her career. If you want to connect with Marguerite you can connect via email hello@whatsthebige.com

Follow me:
Latest posts by Marguerite Haye (see all)

Marguerite Haye joined us as a columnist toward the end of 2015. She's knowledgeable in SEND legislation and embraces its ethos at the heart of everything she does, by adopting a child-centred approach to ensure every child receives the right provision. I have been involved in teaching for over 15 years in various positions and sectors, including being Head Teacher at a Specialist School for Autistic children and young people. Marguerite can recognise individual learning abilities and uses her initiative to tailor learning programs to meet individual need. Through effective leadership, Marguerite promotes an appropriate culture, empowers staff and demonstrates high standards. Marguerite has built connections with parents, young people and professionals alike in her career. If you want to connect with Marguerite you can connect via email hello@whatsthebige.com
View all posts by Marguerite Haye →