It's quite a mountain to climb, getting into university. All those GCSEs, then A-levels or similar. Not to mention the prospect of leaving home for the first time and having no one to clean up after you or do your washing or cook your favourite meals.

If you have special educational needs, the mountain can seem as huge and as fearsome as Everest and any young person with such challenges who gains a Uni place has undoubtedly worked incredibly hard, not just to win a place but also to overcome the challenges their SEN has bestowed upon them. The new EHCP goes up to age 25, so that means their needs will have the support of statutory protection all the way through. 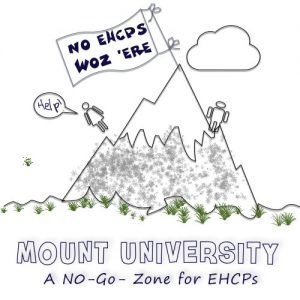 The Bill specifically EXCLUDES young people with SEN if they have managed to get themselves accepted into University.

Congrats young man, now just make sure your Asperger's doesn't give you a breakdown because of the social challenges you face, because if it does, you'd better just cross your fingers and hope for the best.

Students do, of course have the non-means tested Disabled Students Allowance to help with support (though not social care support) and some Unis are extremely good at providing support for SEN students. But equally, some universities are not and either way, the support is not statutory so if budgets are cut and support is slashed, there is no legal right to challenge this.

And anyway, it just MAKES NO SENSE to discriminate against this vulnerable group of young adults out in the world alone for the first time. It makes a mockery of the whole concept extending statutory provision for young people 16-25.

Of course, I've written about this before. I thought I must have got it wrong, so Debs checked back through and no, it was definitely the case.

Apprentices, who presumably get paid for their work, can have an EHCP, so why not university students?

The government surely wouldn't be so cynical as to cut higher education students out in case the home local authority gets lumped with stumping up for their uni fees? Because if a pupil attending an independent special school can have their fees paid or a place secured by the local authority, why not, in theory, a university student?

Yesterday in the House of Lords Grand Committee, amendments were moved and many valiant efforts were made to reverse this and include higher education into the Bill.

But despite cogent, reasoned and eloquent arguments made in support of their inclusion, the government just didn't listen. Minds, it was clear, were firmly made up and the noble Lords who spoke might as well have taken the day off.

Liberal Democrat peer, Baroness Northover rose, noisily shuffled her way through her papers and calmly snuffed out any (slim) hopes of the promise of protection for anyone with SEN determined enough to venture into higher education.

Local authorities have no experience of higher education, she said, and would not have the skills to write a plan that was suitable to cover the wide and varied nature of a university course. The implication is that it's too hard, so don't even try.

I disagree. There are lots of huge challenges in this Bill that those bright young things at the DfE have worked through and overcome. For example, bringing a duty to provide on Health, bringing independent specialist providers into the system and the vast project that is the Local Offer. Why is it that universities are judged to be too difficult to tackle? I bet they could figure it out if given a chance.

Then came the spurious argument that universities were autonomous bodies. But so are independent special schools and Academies they're still included in the EHCP. The government also referred to the protections provided by the Equalities Act, "Universities take them seriously" the Baroness said. Good for them, upholding the law like that.

The government, Baroness Northover said, had updated Draft Regulations and the Draft Code of Practice to be clear that they "...expect local authorities to plan the transition to higher education before ceasing to maintain the young person's EHCP, including how health and social care will be maintained, where it continues to be required.

Because it's easier to bring local authorities to heel than universities.

LAs will also be expected to make prospective SEN University students aware of the support available to them in HE through their Local Offer including the DSA and how to make an early claim (six months in advance of the start of the course) so the support is in place when they start their course.

The Disabled Students Allowance is not means tested and apparently 51,900 young people took advantage of it in the last year at a cost of £117.2m. Additionally, the government provided £15 million to higher education to recruit and support disabled students. This is a very good thing, but it is not immune from cuts and is not statutory.

An allowance will not spot a young person in crisis or monitor them and take action if needed. It will not be reviewed or outcomes assessed. It is not, in short, protection. For parents like me, whose children have Asperger's, it's not a case of money, it's the security of knowing someone is looking out for my son if he is far away from home and that his emotional and social needs are recognised and taken into account.

Maybe this will happen in a good uni, but in others, it won't. This means that if my sons decide to go to university, we will have to choose not only on the basis of suitable course, but also on its reputation for help for disabled students, which is something that most students and their parents do not have to consider.

At one point Lord Lucas raised the difficulties faced by young people who develop mental health problems and how universities find that getting provision can be extremely difficult and it often ends up with the student being sent home rather than supported at university.

The answer from Baroness Northover was confusing. She agreed that supporting students with mental health challenges is a vital area and said,

"I hope that he will be reassured that in the National Health Service now there is parity of esteem between mental health and physical health. We know that good mental health underpins better physical health. The challenges that students face when they leave home and are at university under all sorts of pressures are something we are acutely aware of, as are the higher education institutions. If there are instances where students are not being looked after within those institutions and health services locally, that is obviously a cause for concern."

I can't actually find an answer in there so I'm repeating it in case you can.

If the government is worried about being lassoed into paying tuition fees, there must be ways around this. Going to university is an option and a privilege, it's not mandatory like school so there should be no compulsion to fund tuition. But don't those who make it despite their SEN deserve the same legal protection as someone on an apprenticeship?

However, the government think they've got it covered, albeit piecemeal, with the Equalities Act here and some LA prep from the Local Offer there and the amendment to the regulations and the Code of Practice. This is instead of one easy to understand, joined up EHCP where needs and provision are set out clearly and agencies have to jointly commission by law.

It's not about money, it's about everyone with SEN under 25 having the same legal protection when they are in education. It's about parity and fairness.

Many of our very brightest young adults have some form of SEN whether it's dyslexia, Asperger's, ADD and so on. It's the nature of the beast that original thought tends to come from original brains and those types of people can also be extremely socially and emotionally vulnerable. University can be a very difficult time and they need all the support and protection they can get.

The whole thing just makes me really uneasy, like politics are once again in the way of people and progress and that this is a massive failure in the aspirations of the original green paper. It makes me very sad.

You can watch the whole debate here