In my December blog I shared that I would follow up on the government’s SEND figures for schools. These are released annually in early summer and are based upon returns from all schools in England, made each January.

I’ve looked at the data in detail and identified some interesting trends. In this blog I am focusing particularly on numbers of children in special schools in England. However I would like to start by reflecting back on last week’s release of the Government’s White Paper Educational Excellence Everywhere

Special Educational Needs and Disability figures featured fairly highly in this white paper. Whether they can be translated into actions is of course a different matter. I steer clear of politics where I can and remain focused on improving outcomes for children with SEND whatever the system may be.

In my previous blog on whether academies operate non-inclusive policies,  I shared that we shouldn’t use academies or schools as a generic term because they are all different and we can find good and poor practice in both. The important thing is that improvement is driven forward wherever the children are. I’ll write more on this in due course but I feel that whatever the system, the important thing to focus on is how we can join together to further improve outcomes, find opportunities, use the law, create partnerships, recognise good intentions and build upon them. 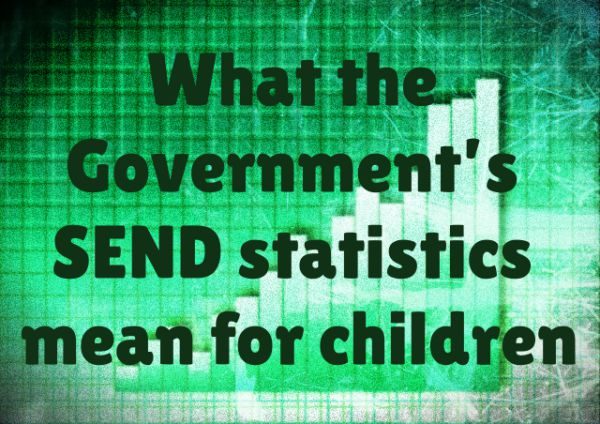 The increase in special school pupils

What does this mean for schools?

These are really significant increases. When the SALT Review (Independent Review of Teacher Supply for Pupils with Severe, Profound and Multiple Learning Difficulties SLD and PMLD) was published in 2010, there were 38,000 children with these types of needs in English schools. There are now 43,000 – that’s a 13% increase in five years.

Turning to those with a primary need of Autistic Spectrum Disorder, the population in all schools in England in 2010 was just over 56,000. In 2015 it had increased to over 90,000.  This has massive implications for policy and practice in schools.

In July 2015 the Department for Education (DfE) published its National Pupil projections data. This predicted a 17,000 increase in the numbers of children in special schools by 2020 and a further 10,000 in the five years following that.

Making sense of the numbers

All of us know that more children are surviving pre-term births and, with advances in medical science, more children with severe and profound needs are entering schools. These statistics really evidence the reality of that increase.

In terms of autism we all also know that understanding has improved and certainly this is impacting on numbers of children diagnosed with autism in schools. There is a debate over how much this means autism is actually on the increase and how much this apparent increase is about more effective diagnosis.

The biggest area of concern here is strategic. Put simply, how are we going to accommodate these increasing numbers and ensure that the children and their families are well served? No wonder that our special schools are full to the brim and parents often struggle to find places.

There really needs to be a strategic review at the DfE on this issue. For those children with the most profound needs there are clearly issues for joined up working between education, health and social care. I spoke to a colleague of mine at the DfE last week – a good guy who has a real focus on, and empathy for, SEN but all he could say was that he hoped some of the capital funding being made available would go to special schools.

I am forever the optimist but we have some big challenges to face for our special schools in terms of these increasing numbers. Whilst highlighting the challenges I think it’s important to recognise that that 92% of maintained special schools in England are ‘good’ or ‘outstanding’; more than in any other sector of education.  That’s because they have good or outstanding teachers and leaders. I’m sure they will rise to the challenge and we can all support them to do so.

Since one of the benefits for disabled and special needs schools is the small numbers, then clearly more need to be built, and on the figures above they need to be built as a matter of urgency. 17,000 pupils at a rate of 100 per school is 170 new Special Schools by 2020, with a further 100 in the next 5 years. In this age of cuts, will the Government bother, or will they pressure currently available SEN schools to expand, reducing the ability of those schools to provide an acceptable level of care and education for SEN children but… Read more »

I sense you are a nice bloke Malcolm but clearly you have a vested interested in supporting the Government’s latest White Paper. I read your article with the understanding that it was written through that particular prism. The increases in certain groups of SEND pupils are startling, for sure. However your article fails to explore the potential negatives associated with segregated education or whether schools are ditching any efforts to make schools more inclusive as a result of Government policy. How does their policy promote an inclusive society and understanding and tolerance of different/diversity long term if children and young… Read more »