I was wondering what to write the other day when I got my weekly digest email from one of my favourite sites, the fascinating question and answer site, Quora. It's full of interesting questions with the answers given by experts.

I occasionally answer parenting and special needs-related questions from my own experience there and the following question was one I pitched in on a few months ago:

What three beneficial qualities should you instil into children? 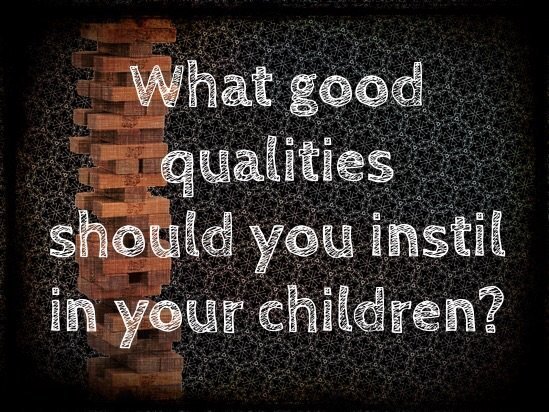 Quora is full of personal wisdom and experience to any question you care to ask and if it's not there, you can ask it yourself and wait for answers from other users.

My answer to the above question was:

I was thinking of my own sons who, of course have high-functioning Aspergers. This means the task of trying to teach these characteristics is very difficult at times, especially the first one.

In fact these three qualities are, in my opinion, life-long challenges for everyone, because they require self-awareness and an understanding that all humans are flawed, ourselves included. In other words, nobody's perfect.

One of the other answers to this question on Quora was 'The ability to forgive yourself', and this is another important quality that goes along with the three I suggested. Ideally they are all qualities instilled in children by their parents but it often doesn't happen, for many reasons, not just because some happen to have ASDs.

There are other answers to the question too, such as among others:

And if you're like me, you can see emerging just why our children with Asperger's, ADHD, Tourette's, PDA and so on have so much difficulty in fitting in!

The real question is, HOW do we instil these desirable qualities in children with spectrum differences?

Almost as if the government had been reading my answers on Quora (lol), the Department for Education last month announced plans to do tackle what it perceives to be an apparent 'lack of character' in England's state schoolchildren by spending £3.5 million on placing, "character education on a par with academic learning for pupils across the country."

It was announced as a “milestone in preparing young people more than ever before for life in modern Britain”.**

It will be interesting to see how schools accomplish this, along with all the other pressures and challenges placed on them, especially as the DfE has only just earmarked a further £1 million to expand research into the most effective ways that character can be taught. "The funding, to be matched by the Education Endowment Foundation, will test the work of non-profit character education projects through school-based randomised control trials."

Err, hold on...shouldn't the research have been done BEFORE the policy was launched? Wouldn't it be a rather good idea to have thought the whole thing through and included evidence-based information packs to help schools get started? Yes, yes, I know good schools will be able to take initiatives of their own forward having done their own research (from schools in the US), but it isn't necessarily the "good schools" where the project is needed most, is it?

From early next year, projects can apply to the fund to expand their existing efforts or to set up new initiatives. All approaches of character education will be considered, including those based both in and out of school, but applicants must display evidence that their activities result in better grades, improved behavior or improved job prospects.

So, the money will go to those schools that already have their own evidence-based character building projects or who have one waiting in the wings, not necessarily those who need it most. Hmmm. Or have I misinterpreted?

Well, I can only tell you how we have done this with our ASD/ADD/ADHD boys and, of course, what has worked for us may or may not work for you - that's for you to decide. Like the saying goes, if you've met one child with autism, you've met ONE child with autism.

Teaching "character" isn't something we sat our kids down and did - nor, I suspect - does anyone else.

However, when your children have similar challenges to ours, you can't hope that they will just learn by example. We have always sought to take opportunities in daily life when a behaviour or an action can be highlighted as 'wanted' or the right thing to do.

Learn when empathy or an apology is required

In my completely unscientific method (from knowing my own children), if they have, for example, hit me or said something unkind, I have sometimes exaggerated pain or shock or sadness (a little, not over-the-top), so that they can see the effect their actions have had. And then, when/if they do apologise, (which may be hours later) I accept it immediately, (ensuring they understand what they're apologising for), and move on.

It's using the same theory as in The Transporters DVDs - that ASD children can learn the right responses to expressions or reactions if they are not (at first) too subtle to spot. It isn't, I have found, that they do not know how to respond, it is that they haven't recognised the effect of their actions in the first place. I don't know about anyone else's children, but my Aspie sons definitely do have empathy and compassion; they just have a hard time spotting when it's needed. The way we tackled it helped them learn.

Learning to laugh at yourself

Our boys have grown up seeing that sometimes looking foolish (as we all do at times), isn't the end of the world, especially if you learn to laugh along or shrug it off.  We particularly wanted to teach them the ability to laugh at themselves - not only is this tied in with self-awareness, but also likeability.

It wouldn't suit every child I'm sure, but we have always gently teased our boys as well as each other for our foibles, usually by an exaggerated look, or reflecting their behaviour such as, "Did you just ...?" and repeating what they just said or did. It's not scientific and it's crucial to know when to pick your moments. But when done with a quizzical look or a slight smile, it has often given them pause to stop in the middle of a rant. Once again, this works for US and our family dynamic but it might give you some ideas of what might work for you, if it's appropriate for your children, in your family.
Tell us your ideas in the comments.

Thinking of others' feelings or needs is very tricky for those with Asperger's, but not impossible. This IS something I have had to expressly talk about, such as:

"You called your brother fat, how do you think that made him feel?
"I don't know"
"Okay, so how do you think you would feel if he had said that to you?"
"I'm not fat."
"Neither is he, but even if he was, would it be nice to say it to him?"
"No"
"What do you think you should do about it to make things better?"
"Tell him I'm sorry he's fat?"

Variations of this conversation have been repeated often over the years and they are sometimes still mean to each other, as brothers are. But now it's more like regular teenagerdom for the eldest. The youngest is a tougher nut to crack - he knows the right thing but impulse and the thrill of "button-pushing" gets in the way. We will not give up!

If there's one thing I know about parents of children with SEND it's that they are both resilient and they persevere. There is no other way. If learning by example was all our kids needed, they'd be streets ahead.

But to teach it, especially through the tender teenage years, means showing them that there is a future worth being resilient and persevering for. When Nicky Morgan talks about being resilient to face modern Britain, she's talking about being the fittest and the strongest to compete in a career with the rest of the world. This is considerably less soul-destroying than coping with yet another needs assessment from social care.

These are a couple of the things we've done - I've no idea if they might help you and I'd love to hear what has worked/is working for you.

What other qualities do you think are important to teach our children and how do you do it if they have social difficulties?

** The application process for 2015 projects is now open

(See the Quora original question and all answers here)