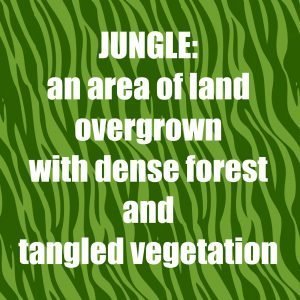 We have a sizeable following on Special Needs Jungle both on the site and via social media. However that also gives us a big responsibility to tell it like it is. If we chose to pretend that everything in our world was honky dory, then to be blunt, we may as well 'disappear' and give ourself some time off.

We could take the "let's pretend everything is going swimmingly" approach but first and foremost we are parents of children and young people with SEND so we know if we took this path, we would lose all credibility with you, our readers.

The reality is that we have more legislation than we know what to do with.  Here is a list of the legislation in place, supposedly, to protect our children and our own rights.

So, with all this in place, we should be fine, shouldn't we?  We should be swinging from branch to branch in the Special Needs Jungle, enjoying the view.  But we're not.  Vines are broken or non-existent and if you're on a vine and it snaps, guess what? You will possibly have a huge battle ahead to get it back again. 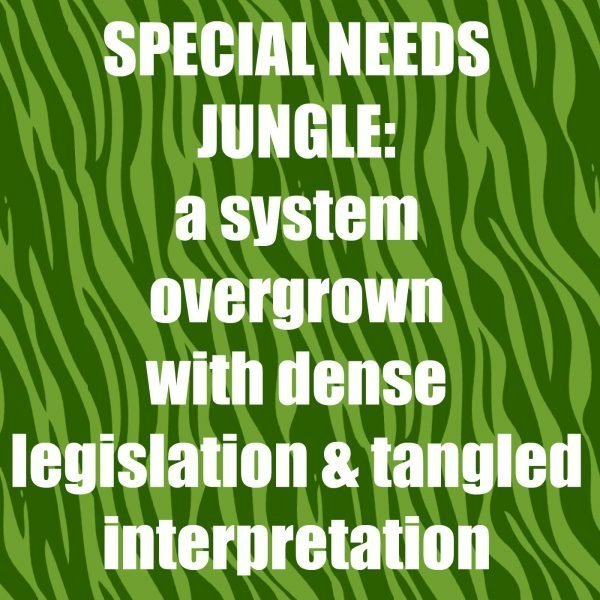 Today, a typical day, I have opened Facebook and found the following stories in my time line:

In order to be transparent, there were also some positives:

At the moment, it is often just the parent who is holding the school, nursery, college, Local Authority, Transport provider, School Governor to account.

If you happen to be unhappy about a situation, you can go through a 10-tier complaint procedure, which of course we all have time for, don't we?  During this 10-tier procedure, your child/young person will possibly be missing out on their education, transport or other opportunities.

If you are able to, you can always employ a Solicitor to go to battle for you.  However, this is not an option open to many.

As families, there are so many battles that we often find ourselves having to choose the ones we will fight.  This often means "accepting the unacceptable".  Anyone familiar with Justice for LB will have read his mum's views on this.  It had a huge impact on me, to the point I have the following quote framed to give me a push:

The acceptance of the unacceptable is common when you’re a parent of a disabled child/adult. Well, and among commissioners, providers, health and social care professionals, support workers and so on. Particularly in the fabric of ‘learning disability provision’. The bar set so low that accepting mediocre becomes a default position. We’re almost socialised to create an ever present bag of excuses and rationalisations for non-existent, inappropriate or partial services.

Our bag steadily filled through grinding years of negativity, deficit/tragedy orientated thinking, assessments, meetings, input by (often ill informed) ‘professionals’. Through jargon laden discussions, unintelligible emails/letters/reports and of constantly being told, explicitly and implicitly, that resources were limited. There was never an imagined future for LB. The vague future bandied around was mealy mouthed, thoughtless, mediocre or worse, budget driven and set within silos of ‘available service provision’.

We need to stop having to accept the unacceptable.  Mediocre cannot be the default position.  We need it to be easier, we need a way for the providers of services (be they teachers, head teachers, short break providers, health providers, social workers, or anyone who is supposed to comply with the legislation) to be held accountable without it becoming one more task for the families.

But how?  What do we really want? Let's be more specific.  What would work for you?  Would you like a regional group, a national group, a telephone call, a face to face or an email?  Should they be LA or Government funded, partly funded via that route or totally independent?  If totally independent, how do they go about funding it?  What would you want them to do on a day to day basis?  How would they help you?  Imagine a scenario where you need help (it shouldn't be difficult) and think what would make it easier, then let us know.